On 18 February, Airbus and Korean Air Aerospace Division celebrated the handover of the 1,000th fuel-saving sharklet for the A320 family and 25 years of partnership at a special ceremony at the Korean facility in Busan. Cutting the celebratory cake’s first slice were (the second from left to right): Walter Cho, EVP and CMO, Korean Air; Young Sik Kang, EVP and CTO, Korean Air; Tom Williams, EVP, Airbus; and Jean-Francois Laval, EVP Sales, Airbus Asia.

After a record January, both Airbus and Boeing delivered even more aircraft this February. The combined deliveries of both manufacturers for the second month of the year, was 95, of which 50 came from the American producer, and 45 from its European counterpart, making it the best February since anna.aero started tracking aircraft deliveries in 2008. Boeing improved its performance when compared with the same month last year, delivering seven more units, while, Airbus handed over one fewer airframe. Overall, 77% of all February deliveries are narrow-body airframes. 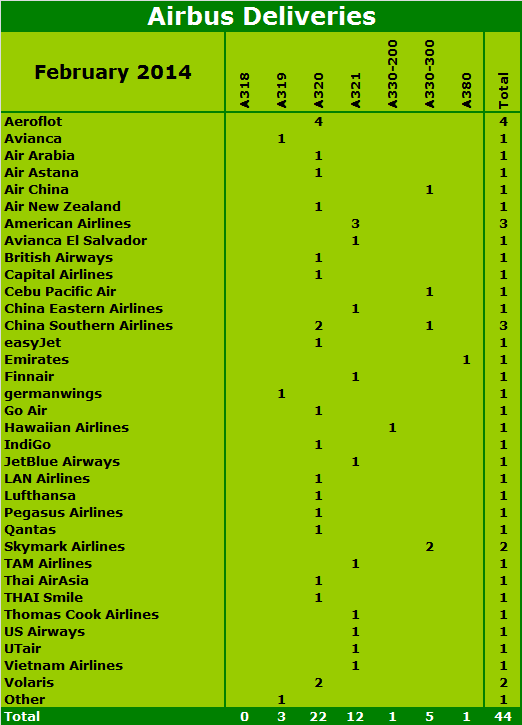 Airbus closed February with a total of 44 units delivered, which constitutes five units more than the January’s deliveries, and one fewer airframe than in the corresponding month last year.

Once again, single-aisle deliveries in February were led by the A320 (22 units) with 37 single-aisle jets provided to airlines around the world. The flag carrier of Russia, Aeroflot, was one of two airlines to receive more than two narrow-body units from the European manufacturer, as it incorporated four A320s into its fleet. Also noteworthy, American Airlines received three A321s, while two carriers saw two Airbus narrow-bodies join their respective fleets in February, namely China Southern Airlines and Volaris with the addition of two A320s each.

A total of seven wide-bodies were delivered in February, three fewer than in both the preceding month and the corresponding month of 2013. One carrier received more than one wide-body unit from Airbus, namely the Tokyo Haneda-based Skymark Airlines with two A330-300s. Following January’s delivery of one A380 to British Airways, the European producer delivered a single Superjumbo in February as well, received by Emirates on 14 February. In addition, a total of three more A330-300s were handed over, one each to Air China, Cebu Pacific Air and China Southern. On 20 February, Aeroflot took delivery of a new A320 fitted with sharklets, which was named in honour of Sergey Botkin, a famous Russian clinician, therapist and activist who made a great contribution to modern medical science and education. 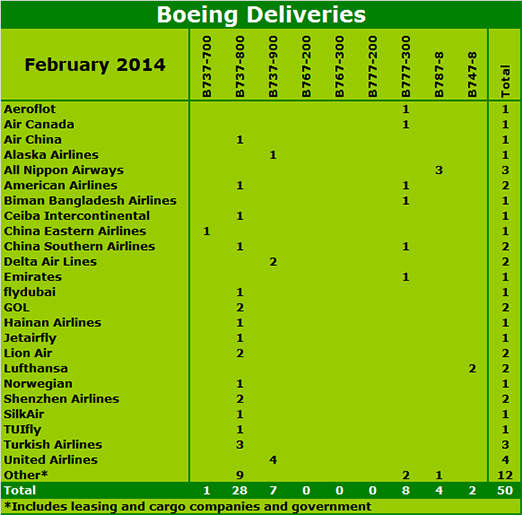 Boeing closed February with a total of 50 units delivered, five more than in January and seven more than in the corresponding month of 2013.

A total of 14 wide-body airframes were delivered by the American manufacturer in February 2014, four more than in the preceding month. In addition, Boeing bettered its year-on-year performance, delivering five more wide-body units than the nine it managed in the corresponding month last year. Following four 787-8s handed over to carriers in January, Boeing continued to clear the backlog with another four units of the type reaching customers in February. All Nippon Airways incorporated three 787-8s into its fleet, while a VIP customer took delivery of the fourth unit. Moreover, two 747-8s were delivered to Lufthansa during the course of last month. On 4 February, SilkAir received its first of 54 new 737s to be delivered by 2020 during a special ribbon-cutting ceremony with Chinese lion dancers in Seattle. Over the coming years, Boeing will deliver a total of 23 737-800s and 31 737 MAX 8s to Singapore Airlines’ regional carrier.