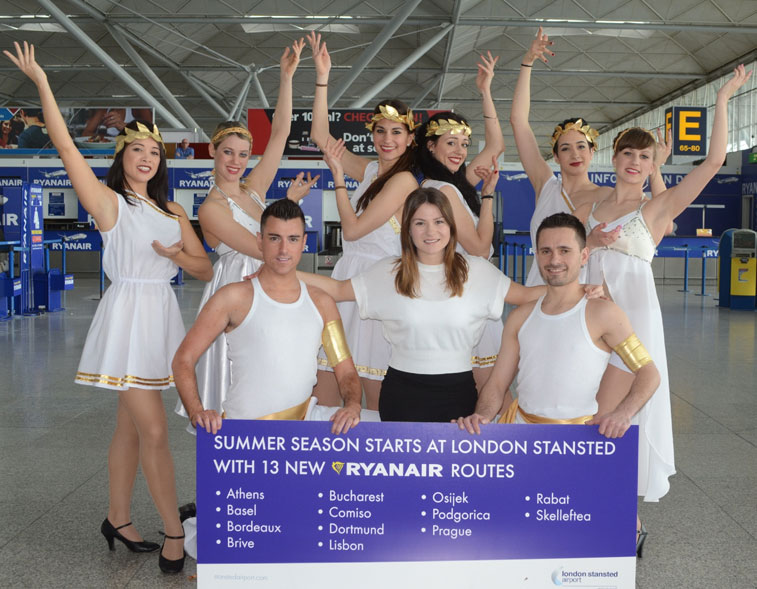 Yet again Ryanair will launch more new routes at the start of the summer 2014 season than any other carrier. The ‘friendly’ ULCC is launching over 60 new routes in the coming weeks including 13 from its biggest base at London Stansted Airport. Greek dancers were on hand on 1 April to celebrate the airline’s new service to Athens, one of three new bases the airline is opening this summer, the others being Lisbon and Thessaloniki.

Sunday 30 March represented the start of the northern hemisphere’s “summer season”. This is when airline schedules are significantly adjusted to cope with the seasonal changes in demand, and when European airlines typically launch the bulk of their new routes for the year. According to anna.aero’s comprehensive database, the number of new airline services being launched in the first three weeks of the summer season is almost identical to last year, at around 460. These new services will be operated by almost 120 airlines operating to airports spread across 90 countries.

With over 160 of those new routes being launched in the the last week anna.aero has, as is tradition, decided to open up the weekly Cake of the Week award to a public vote. And for the first time in anna.aero’s history we’re also going all democratic on this week’s Arch Of Triumph. Now is your chance to choose your favourite “Arch of Triumph” from 21 submissions that we received this week. Cake of the Week aficionados have to make the difficult decision of choosing just their favourite from 20 submissions. We suggest airlines and airports that want to win start getting busy on social media!

Meanwhile for those of you who want to see the comprehensive review of all of this week’s new routes, check out our summary of all this week’s route launches which includes many other pictures.

Ryanair #1 yet again with over 60 new routes

Ryanair’s ‘personality’ may be evolving, but its hunger for starting new routes shows no signs of diminishing. In the first three weeks of the summer season (25 March to 14 April) the airline is launching over 60 new routes, which includes connections from its new bases in Athens, Lisbon and Thessaloniki. germanwings owes its second place ranking primarily due to it taking over many routes previously operated by parent company Lufthansa from Düsseldorf. Contributing to easyJet’s third place are the airline’s new routes from its new bases in Hamburg and Naples. 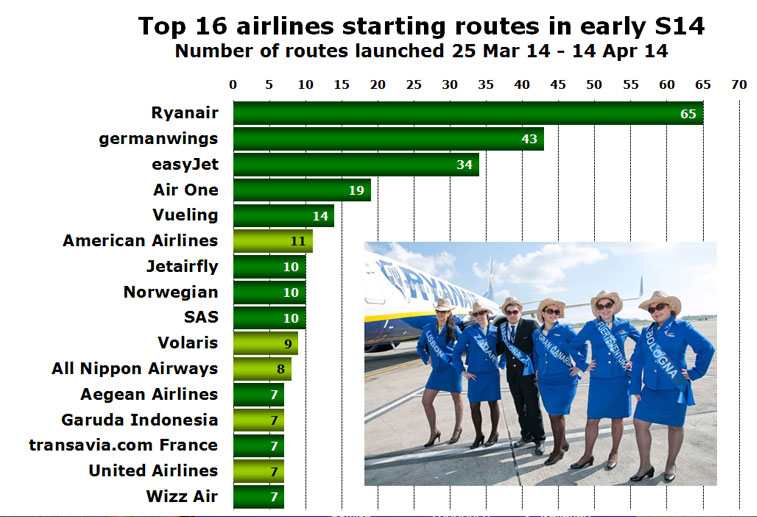 European carriers (in dark green) dominate the rankings with American Airlines the leading non-European airline. Maybe surprisingly, no Chinese carriers make the top 16, whereas All Nippon Airways from Japan does, primarily due to the airline’s international expansion from Tokyo Haneda.

Analysis by country market reveals that this summer is dominated by European countries, with the FIGUS markets (France, Italy, Germany, UK and Spain) taking the top five positions. As mentioned previously, germanwings’ takeover of many Lufthansa routes helps explain Germany’s leading position while Air One, easyJet, germanwings, Ryanair and Vueling all make major contributions to Italy’s ranking of second. easyJet and Ryanair are also the leading providers of new routes in the UK market. 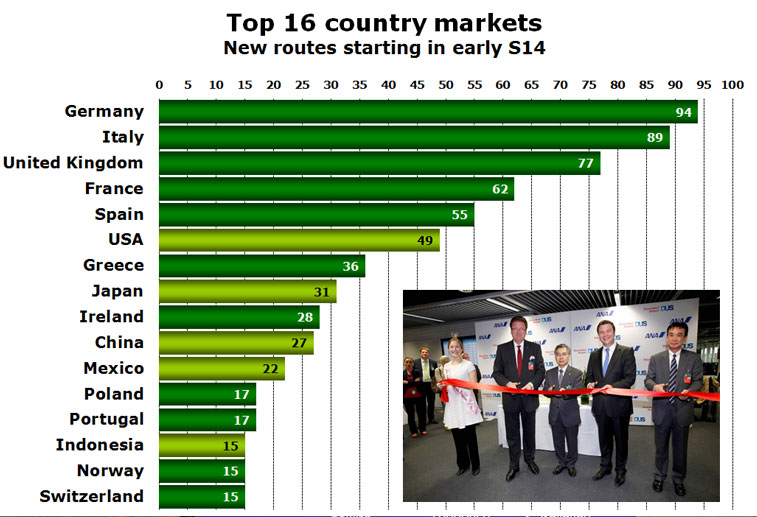 The leading non-European markets (shown in light green) are USA, Japan, China and Mexico. Operations at many airports in these countries are not slot co-ordinated unlike at most major airports in Europe, meaning that airlines feel less compelled to start new services at the start of the scheduling season, when demand is often quite low.