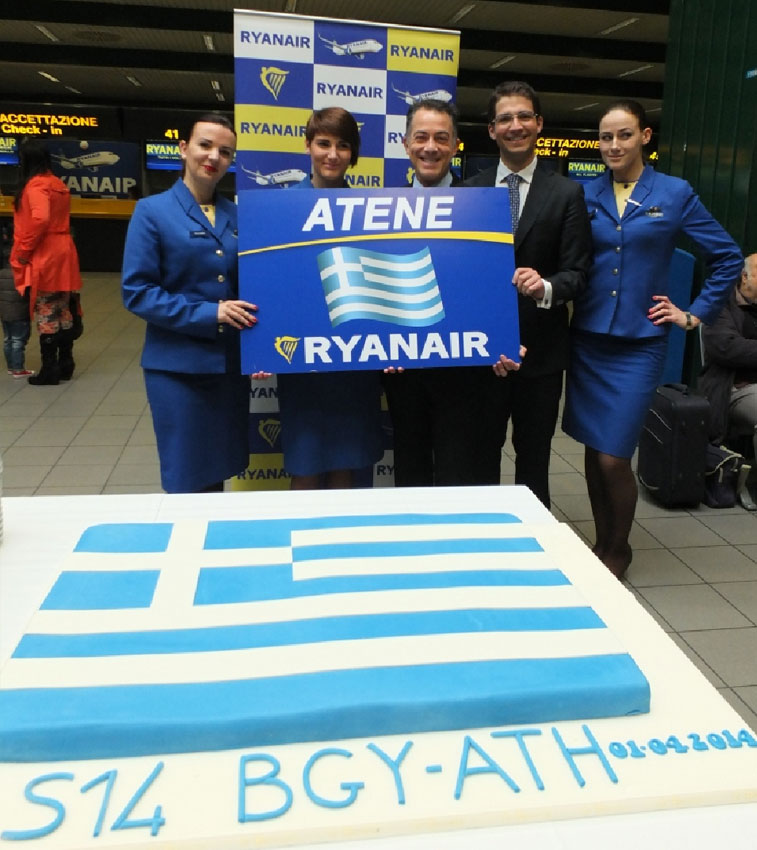 Ryanair launched its new Athens base with six new routes on 1 April, including daily flights to Milan Bergamo. The event was celebrated at the Italian airport with a massive cake in the colours of the Greek flag. Sharing in the moment were: Giacomo Cattaneo, Aviation Manager, SACBO BGY Airport (centre); and Giuseppe Belladone, Sales & Marketing Executive Italy, Greece, Croatia & Romania for Ryanair (centre-right). 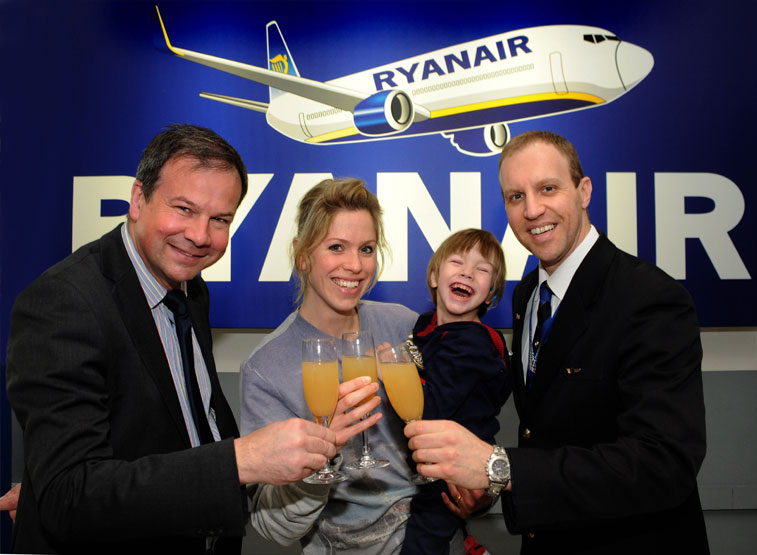 At Bristol Airport a new twice-weekly Ryanair service to Bologna was celebrated on 1 April by Shaun Browne, Bristol Airport, with Bologna passengers Sophie Hannah Brady and Zachary (nearly 4 years) Brady, and Davide Vaccarino, Ryanair. Commenting on the new service Shaun Browne said: “The growth in services between Bristol Airport and Italy demonstrates the strength of the cultural and business links the country has with the South West and Wales. Bologna has one of Italy’s greatest medieval cityscapes and offers a wonderful alternative to the north’s more famous cities. During check in for the first flight, passengers were offered Bellinis and Biscotti biscuits, to celebrate with a little taste of Italy at Bristol Airport.” 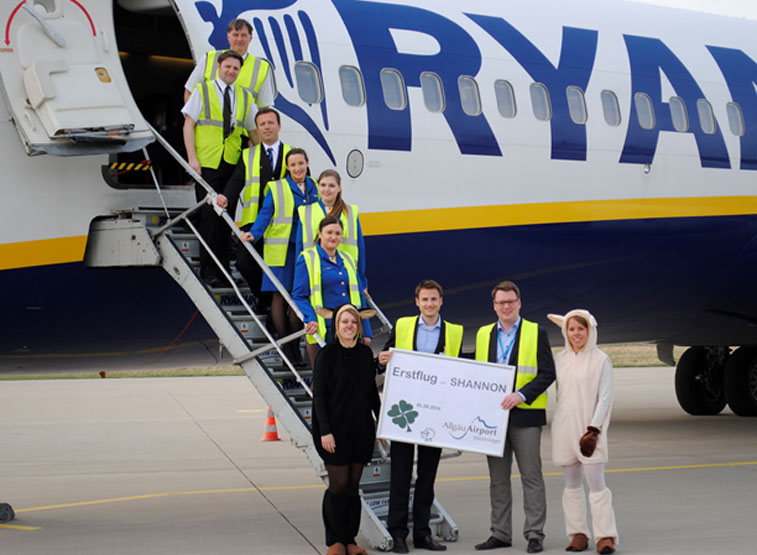 In Memmingen the airport was happy to welcome the start of Ryanair’s thrice-weekly flights to Shannon, which launched on Tuesday 1 April. Sharing in the excitement were Markus Leopold, Sales and Marketing Executive, Ryanair (second from left), and Marcel Schütz, Allgäu Airport Memmingen (second from right), along with the flight and cabin crew of the first flight and a couple of Irish “sheep”. 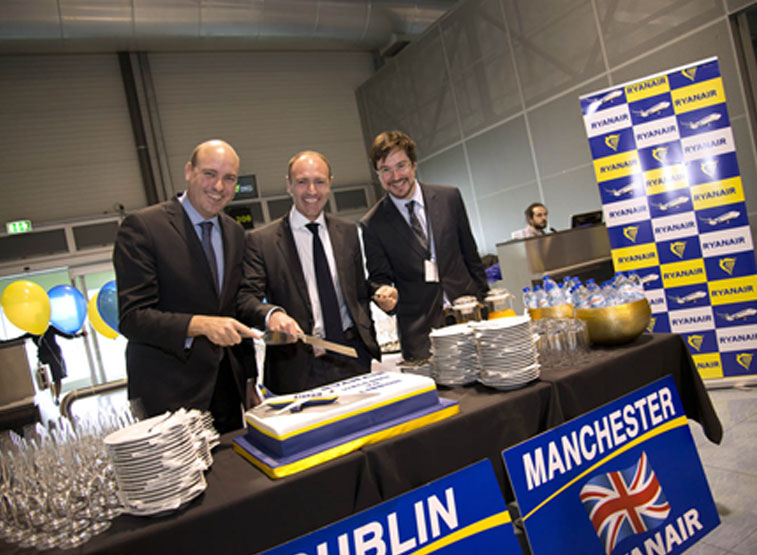 In Lisbon the airport was celebrating the launch of six new services with Ryanair, including four times weekly flights to Manchester and daily flights to Dublin. 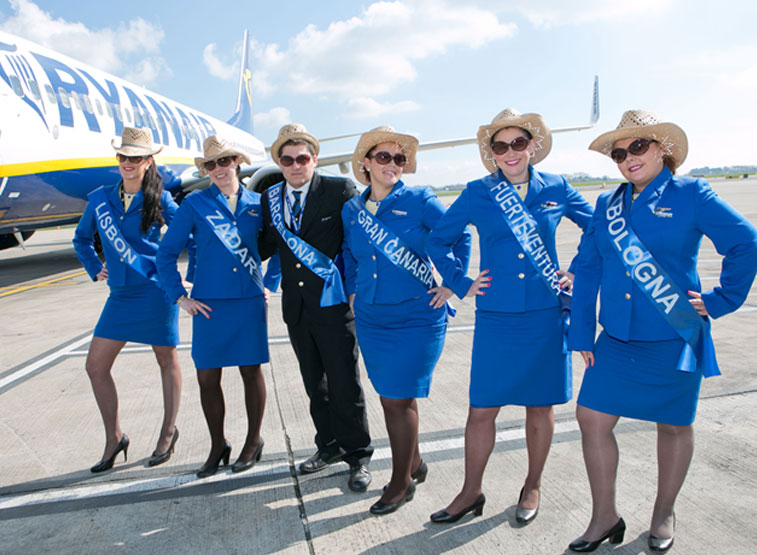 In Manchester the airport was celebrating Ryanair’s six new routes this summer, four of which launched during the first week of April. Flights to Barcelona and Gran Canaria started at the end of March. Ken O’Toole, Chief Commercial Officer for Manchester Airports Group (MAG), said: “We’re delighted that Ryanair have officially launched 6 new routes from Manchester Airport today, as well as revealing the great news that five of their existing popular routes will now have extra flights to accommodate even more passengers. Ryanair passengers travelling through Manchester Airport can also take advantage of relaxed rules for airport shopping and can now take one shopping bag on board in addition to their hand luggage. We look forward to welcoming Ryanair’s passengers to Manchester Airport flying to one of Ryanair’s 36 summer routes.” The Joker, Cathal Costello, was on hand to help Shannon Airport celebrate the launch of nine new Ryanair routes in the last week. Also helping to promote the new routes across Europe were Zanna Wisnieska (Poland), Natalia Rimpo (France) and Alba Perez (Spain). 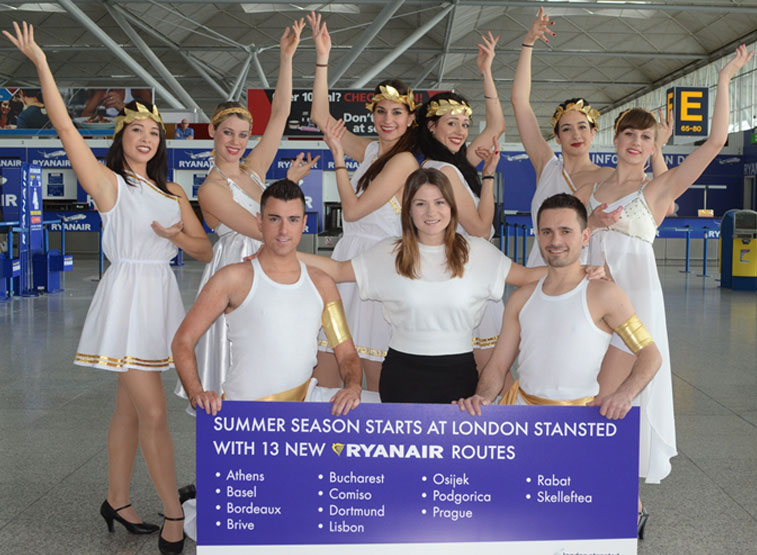 London Stansted was celebrating the addition of 13 new Ryanair routes this summer, eight of which started during the last week. The remaining five (Bordeaux, Comiso, Dortmund, Lisbon and Rabat) are all operating for the first time this summer but were all launched between September 2013 and February 2014. Promoting the good news were Ryanair’s UK & Ireland Sales & Marketing Executive Lisa Cashin and a troupe of Greek dancers, highlighting the airline’s new route to Athens. Warsaw Modlin Airport celebrated the launch of daily domestic flights with Ryanair to Gdansk and Wroclaw on 2 April. There was also an impressive suitcase-shaped cake for passengers to enjoy before the first flights. The airport also welcomed new Ryanair services to Alicante, Shannon and Thessaloniki during the last week. 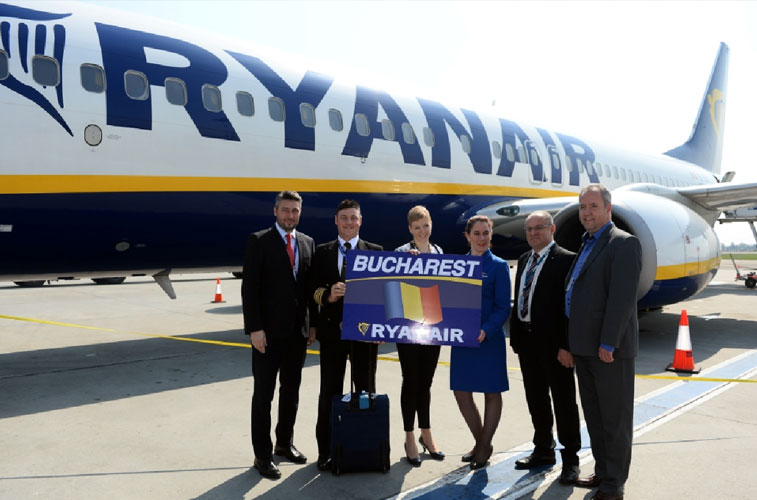 Bucharest Henri Coandă International Airport welcomed Ryanair services for the first time on 1 April with the introduction of daily flights to London Stansted, followed on 2 April by the start of a four times weekly service to Dublin.