Boeing delivers more units than Airbus for the third month in a row; Air Arabia receives 6000th A320 aircraft On 10 March, Air Arabia and Airbus celebrated the delivery of the 6000th A320 family aircraft, which was unveiled during a special ceremony in Hamburg. The LCC received its 23rd of the 44 A320s ordered from the European manufacturer in 2007, which once completed in 2016, the order will more than double the size of Air Arabia’s current fleet.

After the strongest February, both Airbus and Boeing stepped up their deliveries in March of this year, improving on last year’s results by five units. Besides the fact that Boeing maintains its leading position over Airbus in terms of monthly aircraft delivered in the third month of the year, the American manufacturer continues to lead the 2014 delivery race by 20 units (up from 12 in February). When compared with the first three months of 2013, the quarterly deliveries have been increased by 21 units, with 302 aircraft incorporated by airlines into their fleet in 2014.

The combined deliveries of both producers for the third month of the year, was 124, of which 66 came from the American manufacturer, and 58 from its European counterpart. Boeing improved its performance when compared with the same month last year, delivering 11 more units, while Airbus handed over six fewer airframes. Overall, 72% of all March deliveries were narrow-body aircraft, which is down 6% from last month’s figures. 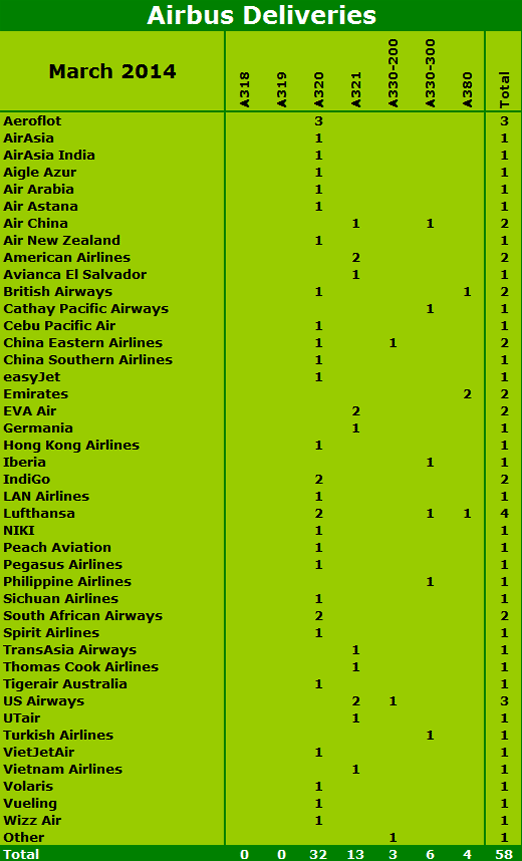 Airbus ended March with a total of 58 units delivered, which constitutes 14 units more than the amount delivered in February 2014 and six fewer than in the corresponding month last year. Over the three completed months of 2014, Airbus delivered 141 units, a decrease of 2.1% (three units) on the same period in 2013.

Once again, single-aisle deliveries in March were led by the A320 (32 units) with an overall 45 single-aisle jets provided to airlines around the world. Geographically, European carriers received the highest amount of narrow-bodies this month, with 16 airframes, closely followed by the Asian operators a total of 15 units. The flag carrier of Russia, Aeroflot, was the only carrier to see more than two narrow-body units join its fleet, with the addition of three A320s. Furthermore, a total of five airlines took delivery of two Airbus single-aisle aircraft, namely American Airlines, EVA Air, IndiGo, South African Airways and US Airways.

A total of 13 wide-bodies were delivered in March, six more than in the preceding month, but two fewer than in the corresponding month of 2013. Following February’s delivery of a single A380, Airbus delivered four Superjumbos in March, with two of them incorporated by Emirates into its fleet, while the other two were received by British Airways and Lufthansa. In addition, a total of six A330-300s were delivered, one each to Air China, Cathay Pacific Airways, Iberia, Lufthansa, Philippine Airlines as well as Turkish Airlines. On 26 March, Aeroflot took delivery of a new A320 fitted with sharklets, which was named in honour of Pavel Ivanovich Beliaev, a Soviet fighter pilot and the cosmonaut who commanded the historic Voskhod 2 mission that saw the first man walk into space in 1965. 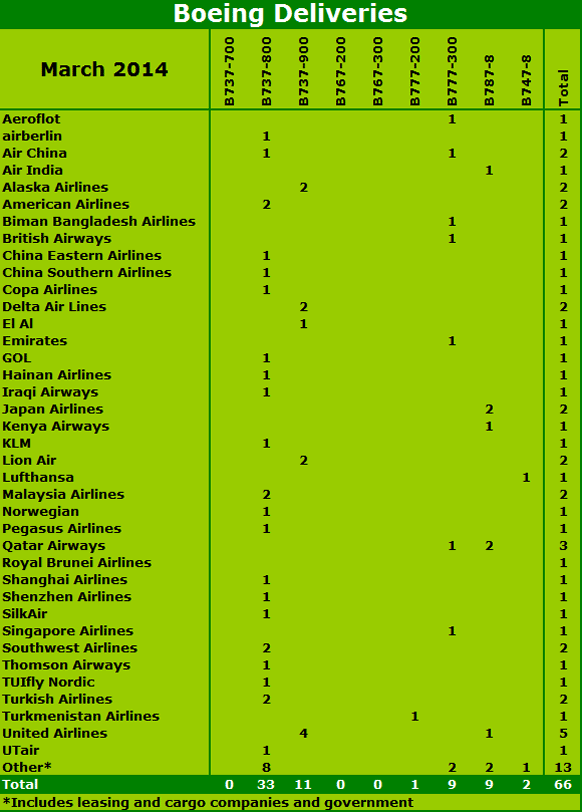 Carriers received a total of 44 narrow-bodies from the American producer, eight more than in the preceding month. The North American region was the largest recipient of the 737 family with 12 aircraft being delivered to carriers based within the area, followed by Europe and Asia, both with 11 deliveries. On top of the list is United Airlines for the second consecutive month, as it took delivery of four 737-900s. Other operators to receive more than one single-aisle unit from the American manufacturer were Alaska Airlines, American Airlines, Delta Air Lines, Lion Air, Malaysia Airlines, Southwest Airlines and Turkish Airlines.

A total of 22 wide-body airframes were delivered by Boeing in March 2014, eight more than in the preceding month. In fact, the American manufacturer bettered its year-on-year performance, delivering three units more than the 19 it managed in the corresponding month last year. Following four 787-8s handed over to carriers in both January and February, Boeing continued to clear the backlog with an impressive 10 units of the type reaching worldwide customers in March. Four 787-8s were incorporated by Asian operators into their respective fleets, namely Japan Airlines with two as well as Royal Brunei Airlines and Air India with one each; while one of the MEB3 airlines ― Qatar Airways ― received two airframes of the type. Qatar Airways was the only airline to take delivery of more than two wide-body units from Boeing, as it also saw one 777-300 join its fleet. 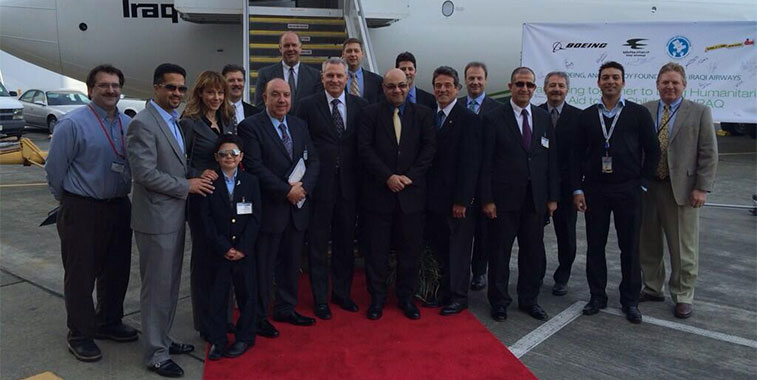 On 25 March, Iraqi Airways celebrated the delivery of one of the 30 737-800s that were ordered in 2008. The ceremony was held in Baghdad and included a delegation from the Iraqi Ministry of Transportation and the Iraqi commercial attaché to the United States. The flag carrier is currently undergoing a multibillion dollar upgrade of its fleet.