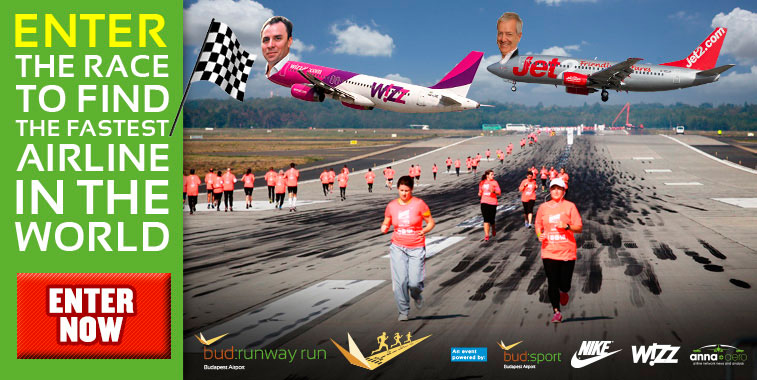 “I had better start the training!” Jet2.com Managing Director, Ian Doubtfire tells anna.aero. Doubtfire is the first airline boss to accept the challenge to race Wizz Air CEO József Váradi for the title of “Fastest Airline Leader in the World” in the 12km running race taking place on Budapest Airport’s Runway 13R-31L.

Jet2.com Managing Director, Ian Doubtfire, has become the first airline boss to sign up to the challenge to race Wizz Air CEO József Váradi in a bid to win the title of “Fastest Airline Leader in the World” in the 12km running race taking place on Budapest Airport’s Runway 13R-31L on Saturday 6 September. (A shorter 6km race distance is also included in the programme.)

The airline leader’s prize is one of a series of anna.aero-Budapest Airport Golden Cake Trophies available for race winners taking part in “bud:runway run”, a totally unique race taking place on the active runway of a major European airport in aid of child cancer charities, and other good causes.

Organised by an expert coalition of race host Budapest Airport, Nike, Wizz Air and anna.aero, the other the top prizes also include the “Fastest Airline in the World” team prize and “Fastest Airport Leader” (all individual entries have both male and female prizes). 100% of entry fees will be donated to the designated charities.

As most airlines and airports already have major charity commitments, there’s no need for participants to raise big cash sponsorship targets – competitors just have to pay an entrance fee (€75 for individuals or €50 per runner for team entries) with 100% of this sum donated to the benefiting charities. Besides the “Golden Cake Trophies,” Platinum Sponsor and Official Carrier Wizz Air will also be awarding tickets and Wizz Tour prizes to the key winning categories. Every participant will also be presented with a specially-produced Finisher’s Medal, a gift bag with lots of lovely presents, and a Nike technical souvenir shirt to wear with pride wherever you run in the world. 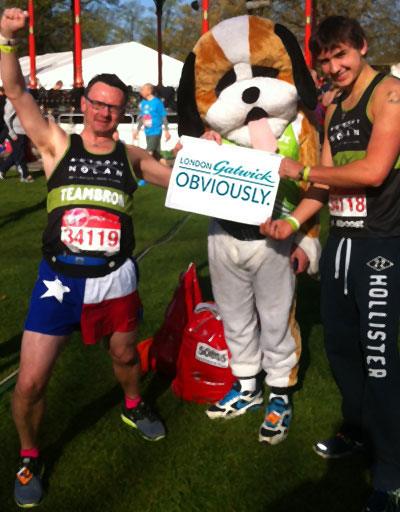 $30,000 for bone marrow transplants from Virgin London Marathon: anna.aero’s Publisher, Paul Hogan, a strange dog, and Max Hogan (a photographer for the anna.aero Show Dailies) at the London Marathon start in Greenwich. Hogan (snr) is wearing the Texan flag shorts sent to him for the race by amazingly kind lady in Houston, Tx, who was twice bone marrow donor to his late daughter, Brontë. “Thanks so much for the shorts Heather, we’re also very grateful for the backing of our local airport, London Gatwick, and to Ryanair which donated €10,000 from on-board scratch card sales to our cause” said Hogan (who also ran in Nike shoes, in support of “bud:runway run’s” co-organiser.)

Race Day will include a significant chance for relaxed and high quality networking at Race Headquarters, based in the former Terminal 1 – a protected building which is now the Budapest Airport Event Center, providing excellent facilities for race preparation, recovery, entertainment and other comforts. The prize-giving will take place in the former departures lounge itself.

How to take part

To take part in the incredible, rare privilege of running on the runway of a major European capital city airport, you don’t have to pay any money now, just fill out this tiny registration form:

Press me to sign up for the bud:runway run

Another $30,000 for bone marrow transplants

anna.aero’s running team, which will be competing for one of its own the “Media Golden Cake Prizes” in the race on Budapest’s runway, also took part in the Virgin London Marathon on Sunday, raising $30,000 for the bone marrow transplant charity, Anthony Nolan, which will also be a key beneficiary of “bud:runway run.” anna.aero’s Publisher, Paul Hogan, completed the marathon wearing a pair of Texan flag shorts sent to him by the kind lady in Houston, Tx, who was twice bone marrow donor to his 12 year-old daughter, Brontë, who died after a long fight with leukaemia in 2011.

“We’re also very grateful for the backing of our local airport, London Gatwick, and to Ryanair which donated €10,000 from on-board scratch card sales to our cause” said Hogan. “Max had a great solid, consistent run with a sub four-hour 3.57 time; it was great being Texan for a day – I had a lot of calls from the 500,000 supporters lining the route, but I’m afraid I was a disgrace to my adoptive state, with a time of 4.11 – 34 minutes off my personal best.”

Press me to sign up for the bud:runway run