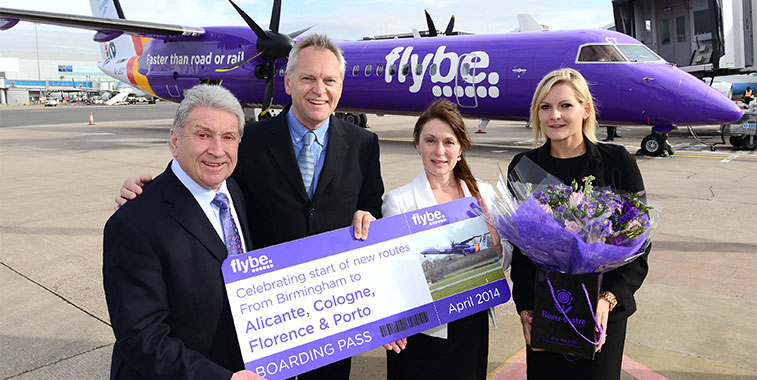 Flybe launched new routes from Birmingham to Alicante, Cologne Bonn, Florence and Porto during the last week, using mostly its Embraer E175s, but also its Q400s, as in the case here of the first flight to Cologne Bonn. Embracing the airline’s new purple branding are Flybe’s VIP business contingent of Peter Mathews CMG, Paul Willoughby, Mandy Haque and Beatrix Troger. Flybe’s E175 arriving at Florence Airport on 10 April on its maiden flight from Birmingham. The route will be served daily (except Tuesdays) and will face no direct competition. In Porto Flybe’s maiden flight from Birmingham was welcomed on 12 April with a rainbow-enhanced water arch salute, and an impressive cake. The route will be served up to four times weekly during the summer using the airline’s E175s. Preparing to cut the cake were: Márcia Canêdo, Marketing Analyst Executive, Porto Airport; and Paula Barbosa, Marketing Communication Executive, Porto Airport.