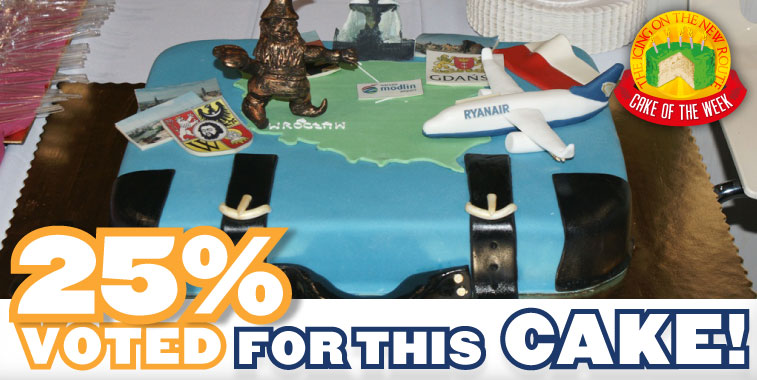 This impressive suitcase-shaped cake was created to celebrate Ryanair’s introduction of its daily Polish domestic flights from Warsaw Modlin to both Gdansk and Wroclaw. Not quite winning the crowning glory, but only just pipped at the post, was the majestic cake celebrating the carrier’s Skelleftea to London Stansted route launch.

It was a close run race to be crowned winner of the public vote for Cake of the Week S14 Part 2. Even in the last few minutes of voting, two of Ryanair’s new routes were still fighting it out, and with just a 4% winning margin we can announce this week’s route confectionary victor is Ryanair’s Warsaw Modlin to Gdansk and Wroclaw cake, with 25% of the votes.

Launching 61 new routes in the second week of the summer 2014 season, it’s not surprising Ryanair follows in Norwegian’s footsteps from last summer and becomes only the second airline to take both first and second place in the sixth year of our Cake of the Week public votes.