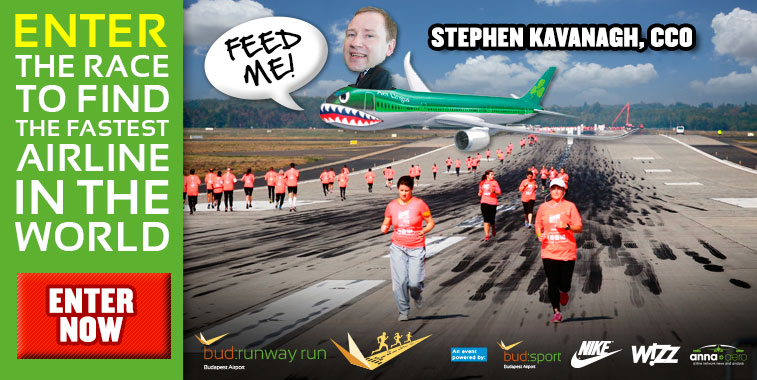 The Aer Lingus Chief Commercial Officer no doubt hopes to paint “Fastest Airline in the World” on the nine A350-900s arriving 2018-2020.

Aer Lingus Chief Commercial Officer, Stephen Kavanagh, will lead the surging Irish carrier’s bid to win the title of “Fastest Airline in the World” in the 12km running race taking place on Budapest Airport’s Runway 13R-31L on Saturday 6 September, a charity event in aid of child cancer charities, and other good causes.

Aer Lingus is the latest airline to commit to “bud:runway run,” following the signing of competitors from easyJet, Flybe, Norwegian, Jet2.com, Ryanair. It comes at a time of considerable network development activity for the airline as it launches seven new destinations this year and plans for more North American routes with the arrival of nine A350-900s between 2018-2020: “We will continue to make some very significant advances in 2014-15, transatlantic is still the opportunity and our new capacity is being very well absorbed,” Kavanagh told anna.aero in an interview in Dublin last month.

The fastest airline team prize is one of a series of anna.aero-Budapest Airport Golden Cake Trophies available for race winners taking part in “bud:runway run”, a totally unique race taking place on the active runway of a major European airport.

Organised by an expert coalition of race host Budapest Airport, Nike, Wizz Air and anna.aero, the other the top prizes also include the “Fastest Airline CEO” and “Fastest Airport CEO” prizes (all individual entries have both male and female prizes). 100% of entry fees will be donated to the designated charities.

As most airlines and airports already have major charity commitments, no need for airlines or individuals entering bud:runway run to raise big cash sponsorship targets – competitors just have to pay an entrance fee (€75 for individuals or €50 per runner for team entries) with 100% of this sum donated to the benefiting charities. Besides the “Golden Cake Trophies,” Platinum Sponsor and Official Carrier Wizz Air will also be awarding tickets and Wizz Tour prizes to the key winning categories. Every participant will also be presented with a specially-produced Finisher’s Medal, a gift bag with lots of lovely presents, and a Nike technical souvenir shirt to wear with pride wherever you run in the world.

Race day at Budapest will include a significant chance for relaxed and high quality social networking among participating air transport executives at Race Headquarters, based in the former Terminal 1 — a protected building which is now the Budapest Airport Event Center, providing excellent facilities for race preparation, recovery, entertainment and other comforts. The prize-giving will take place in the former departures lounge itself.