Flybe to launch ‘virtual’ base at London City this winter 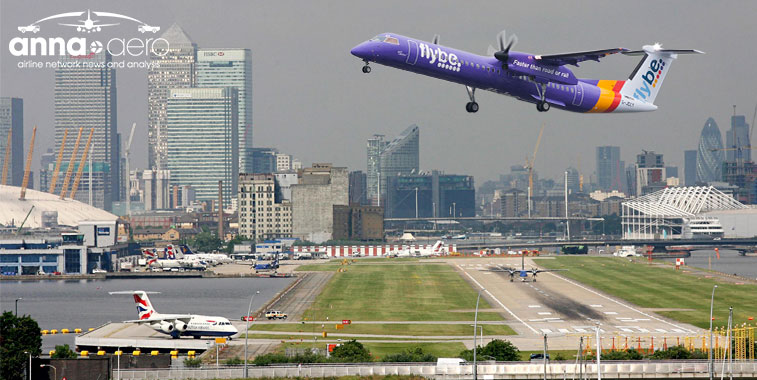 Flybe this week announced plans to ‘base’ five aircraft at London City Airport from the end of October, at the start of the 2014 winter season. Five routes have been announced in England (Exeter), Northern Ireland (Belfast City), Scotland (Edinburgh and Inverness) and Ireland (Dublin). Of these, only two are currently served (Dublin by CityJet 38 times weekly and Edinburgh by British Airways 51 times weekly), while a third (Belfast City) was operated by Scot Airways on behalf of Air France between March 2007 and May 2008.

94 departures per week from end of October

According to the airline’s website, Dublin and Edinburgh will be served with up to four daily flights, Belfast City and Exeter with up to three daily flights, and Inverness with up to two daily flights. No aircraft would appear to be stationed overnight at London City with the earliest departure from London City not being until 08:30. However, all the ‘inbound’ flights depart before 07:15, resulting in passengers arriving in the heart of London in time for a full working day.

anna.aero was lucky enough to get a 30-second interview with Paul Simmons, Flybe CCO on the day of the London City announcement to discuss the return of the airline to the London market, following its withdrawal from London Gatwick at the end of the W13/14 season, as well as its recent deal with Stobart Air at London Southend.

anna.aero: We have noticed all the routes are inbounds, is that due to a lack of early morning stand capacity at LCY?

Paul Simmons: No. It’s due to our strategy of connecting the UK regions and Dublin into London.

aa: What percentage of traffic do you expect to come from inbound vs outbound from London City?

PS: It’s hard to tell until the bookings get up and running, however we do expect the routes to be slightly biased towards inbound from the regions. But that said, given our attractive schedules offering convenient day returns at both ends of the route, we also expect to get London corporates on board on too.

aa: Where are the five aircraft coming from? It says in the press release that they are ‘growth’ aircraft.

PS: Yes, they are new metal to the current flying programme.

aa: What are the aircraft types being used? Will you be using both ERJ 175s and Q400s?

PS: All of the routes will be operated by Q400s. We believe that these are the most economic for the routes.

aa: Will you be employing London City based crews?

PS: Everything is fed from the regions, from our three existing bases at Exeter, Belfast City and Edinburgh, as well as two new night-stopping aircraft at Inverness and Dublin.

aa: Is it your intention to turn London City into a proper base (with night-stopping aircraft) rather than a virtual one at some point?

PS: We wouldn’t rule it out. But I go back to what I said before about the importance of bringing traffic in from the UK regions and Ireland. For example, the first train from Exeter doesn’t get into London Paddington until 08:38 — which is on the opposite side of London to the ‘City’. Our first flight from Exeter into London City arrives at 08:00. So you can be in a meeting in an office in Canary Wharf by 08:30 with Flybe.

aa: How will you differentiate yourself from British Airways (which flies 51 weekly to Edinburgh already) and CityJet (which flies 38 weekly to Dublin)?

PS: Firstly on cost base — we have more efficient equipment versus the E190s [used by British Airways to Edinburgh] and the RJ85s [used by CityJet to Dublin]; Secondly, one of our key product offers is our on-time performance, backed up by our ground-breaking 60/60 deal, which we think is unique in the industry — if any of flights are more than 60 minutes late, and it’s our fault [not ATC or weather delays for example] we give the passenger a £60 credit to use on an another flight, providing its within 60 days.

aa: Any plans to look at routes into Europe from London City?

PS: We expect to make an announcement in the next three weeks about some flights into Northern France and Northern Spain, as well as some seasonal ski operations.

aa: Do you envisage any potential conflicts with the London Southend operation for Stobart Air?

PS: Not really; the London Southend offering with our partners Stobart Air is more leisure-based, whereas our operations into London City will be more business-based. So we see them as being synergistic. However, both of these decisions show our commitment to London and the South East.