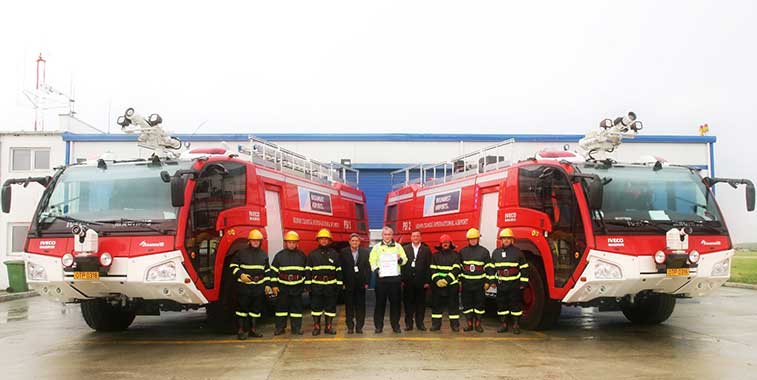 Standing between a magnificent pair of IVECO Magirus Dragon tenders are some of Bucharest Airport’s proud firefighters which helped to deliver the victory in the second ever public vote for global excellence in Fire Truck Water Arches.

Over the last few weeks, running alongside anna.aero’s traditional public Cake of the Week votes which always mark the start of the Northern Hemisphere summer operational season, our readers were also invited to vote for their favourite Fire Truck Water Arch (FTWA). Our data elves were staggered, but not entirely surprised by the popularity of the competition which crowned two airports with the coveted ‘Arch of Triumph’, with nearly 2,000 votes cast over those two weeks. In fact, both FTWAs proved almost as popular, in terms of votes made, as the long-running and more established Cake of the Week competition, just going to show how important this new battle of airport marketing departments has become. The spoils went to two Eastern Europe capitals — namely Budapest and Bucharest — with both airports blowing away the competition, achieving 45% and 70% of the votes in their respective weeks. The victory achieved by the Romanian capital city airport was a particularly proud moment for anna.aero’s Assistant Editor Vlad Cristescu, who was raised in Bucharest: “This is the most exciting day (he’s been with the company less than six months) of my anna.aero career so far — even more exciting than when I heard about the plans for start-up Fly Romania (which launches several routes from next month).

It’s business as usual this week however, with anna.aero’s four ‘expert’ judges (including Cristescu) scoring offerings from the world’s airports over the last two weeks of new route launches. After winning last week’s Cake of the Week for the launch of its Belfast City route from Doncaster Sheffield, the Yorkshire airport’s quirky approach to FTWAs has secured it another victory this week, this time for the start of its Isle of Man service, as well as the #2 spot on the leader board for 2014. 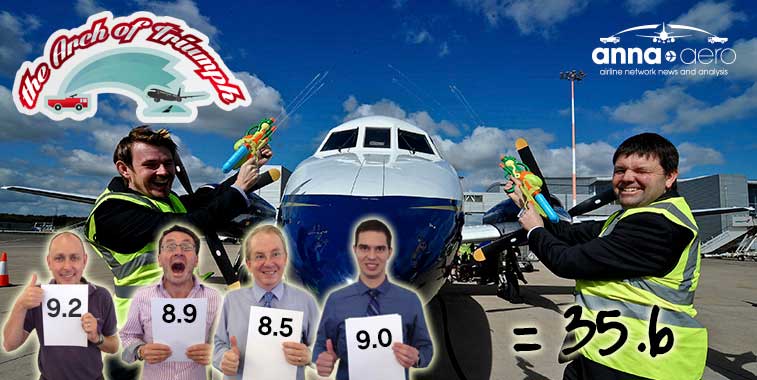 Judge’s comments: Always use the right equipment for the job. When you have 19-seat Jetstream 31 to deliver an FTWA on, it’s probably best not to get the fire trucks out, just in case you blow the aircraft back down the taxiway. Use high-powered water pistols instead! Known as ‘Robin Hood’, this FTWA gives delight to the rich and to the poor. 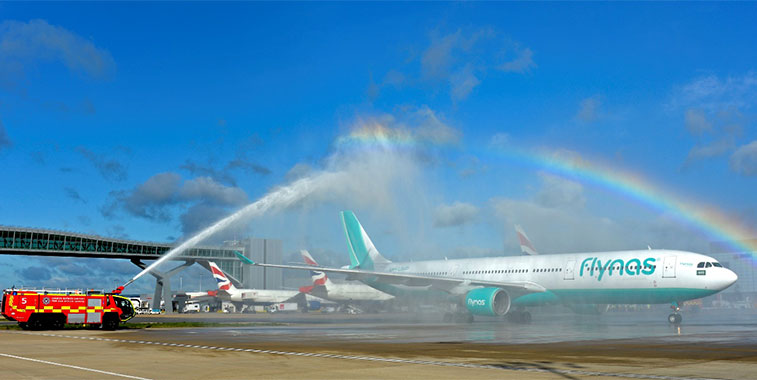 One half London Gatwick firefighters; one half Mother Nature = average FTWA.

Judge’s comments: Now we all enjoy the appearance of a rainbow in an FTWA, but when it completely obscures one half of the arch someone needs to take Mother Nature to one side and explain to her not to stray into territories where she is omnipotent and leave it to those that are — airport marketeers. It’s still pretty though eh? 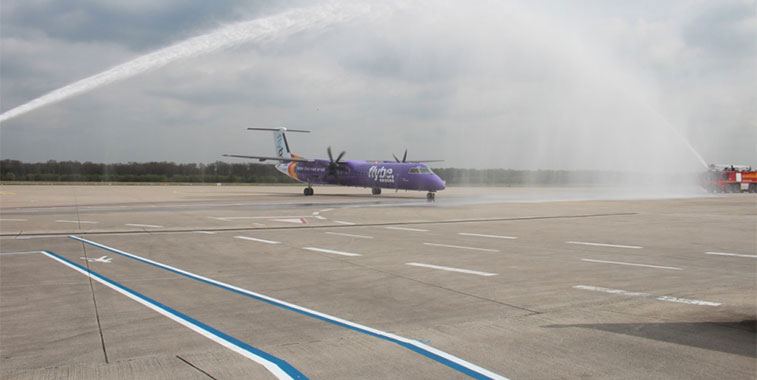 Judge’s comments: No doubt the execs that patrol the corridors of power at Flybe Towers down in Exeter want to keep their new liveried Q400 looking pristine for any photo opps that may present themselves (especially given the small fortune they probably paid their swanky London advertising agency on its rebranding exercise only to be told ‘paint your planes purple’), but this ‘Cologne Curtaining’ treatment was perhaps a bit excessive. Result is a nice clean aircraft, but not a standout FTWA. See our story on Flybe’s new ‘virtual’ base at London City. 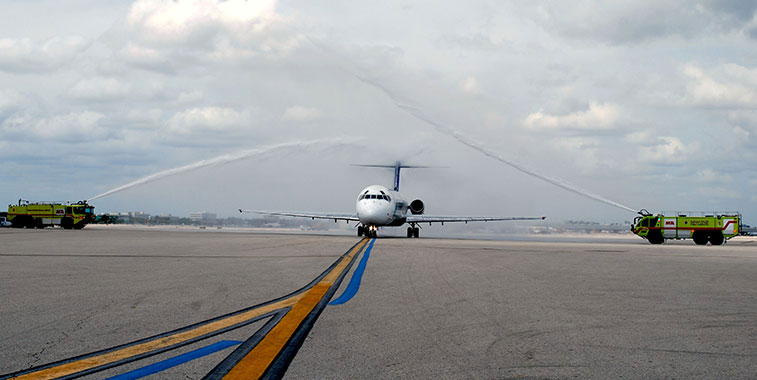 Gravity-defying display from the right-hand tender.

Judge’s comments: Now we’ve been doing this competition for almost a year now, but none of us has ever seen a water jet like the one on the right-hand side of this so-called arch from Miami. It defies gravity, physics and the Warsaw Convention. Despite the lack of arch, we have given it points just for sheer uniqueness. 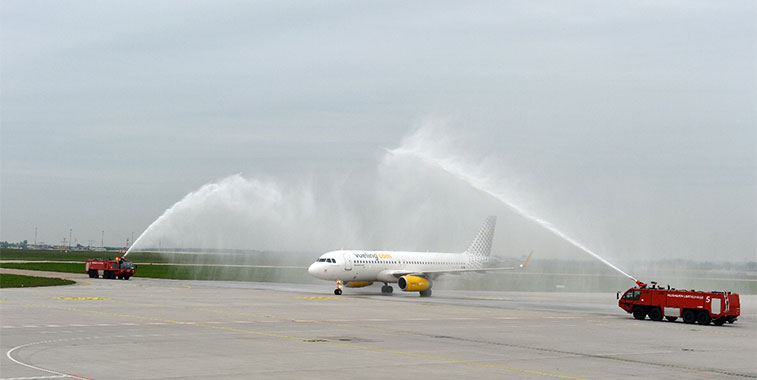 Don’t go in the water. Clearly the Leipzig/Halle fire crews are afraid of Shark(lets).

Judge’s comments: Obviously the Leipzig/Halle Airport fire crews heard the word ‘shark’ and decided to keep their distance from the aircraft they were told to conduct an FTWA on, not realising it was just a Sharklet-equipped, brand new Vueling A320. The result is a ‘Dukes of Hazard’ style FTWA, which also appears to be wind-affected. 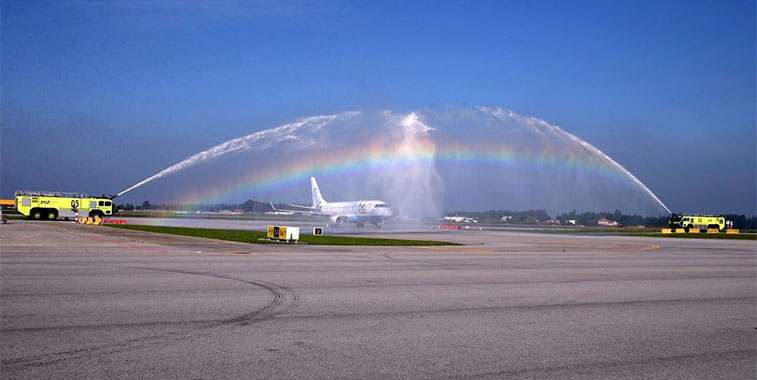 Judge’s comments: Unlike the offering from London Gatwick, Porto’s airport fire crews and Mother Nature have worked in harmony to create something of beauty and wonder. We still would have liked to see the two respective water jets meet more decisively. See our story on Flybe’s new ‘virtual’ base at London City. 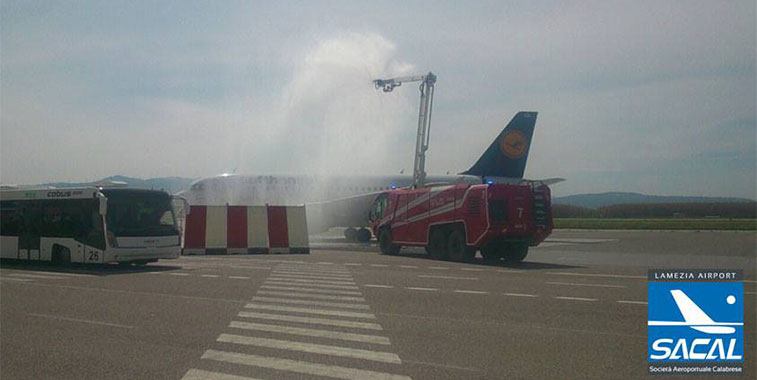 Arrrrrrrgh! Photo bombed by an airport bus. Oh and a noise screen. Any sign of an FTWA?

Judge’s comments: Too much ‘visual clutter’ in this picture, with the airport bus driver clearly wanting a ‘piece of the action’. We think the airport marketing team at Lamezia Terme may want a re-think on the location for the next FTWA shot. 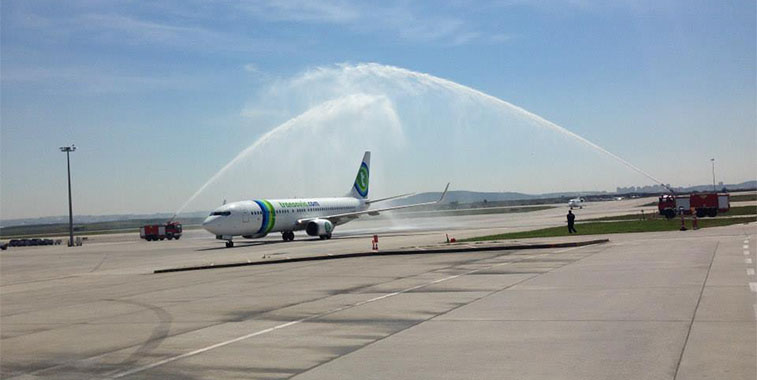 Judge’s comments: Classic ‘Gangnam Style’ Arch was produced by the fire crews from Istanbul Sabiha Gökçen — if the right-hand tender hadn’t been dazzled by the April sunshine in the Turkish capital, this could have been a serious contender this week. Still, not a bad effort for the first offering from SAW in the ‘Arch of Triumph’ competition. 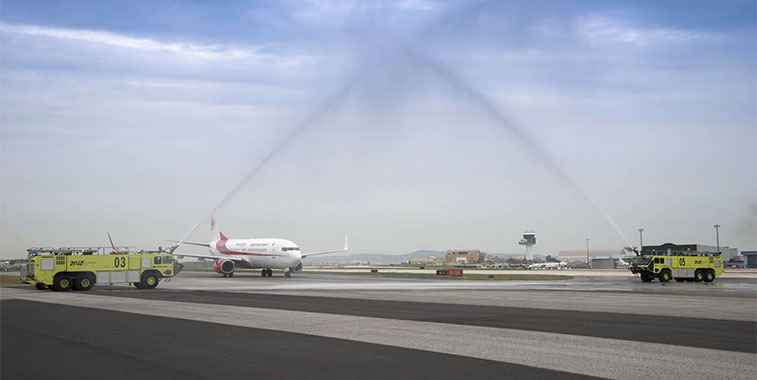 Judge’s comments: These tenders are up nice and close to the aircraft, which scores well with the judges, but just too much height on the FTWA, resulting in excessive ‘Tobleroning’. 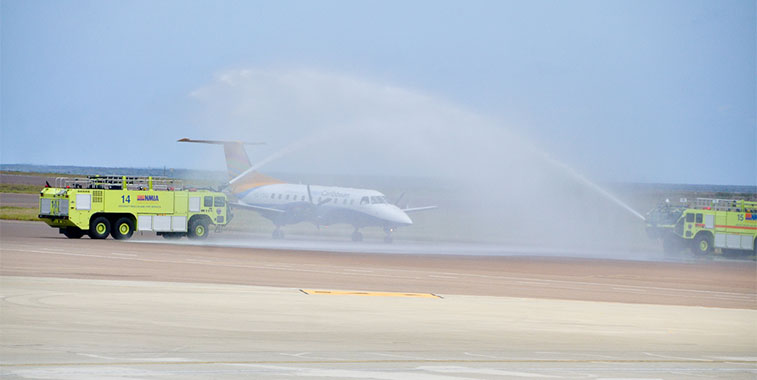 Will that Brasilia fit through the gap left by the tenders – yes with millimetres to spare!!

Judge’s comments: To be that close to such a small aircraft and to still make a hash of the FTWA is bad form. Let’s hope they never have to do one on an A330 or 787. There will be water covering half of Jamaica. 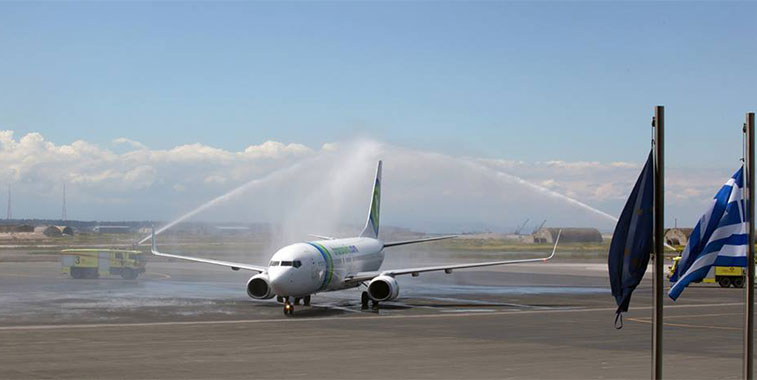 Judge’s comments: This arch is let down on two elements. The picture was taken slightly too late and the dose of national pride, with the encroachment of the ‘I Galanolefki’, have both impacted on what could have been an award-winning FTWA. Kakotychía Thessaloniki. 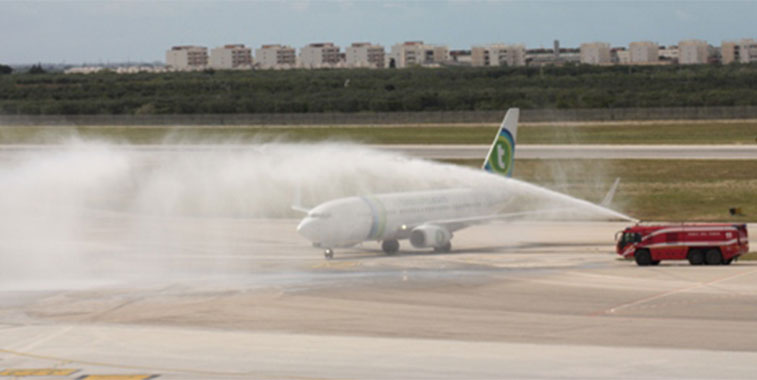 A fine mist rather than a fine water arch.

Judge’s comments: Despite the fact that the fire crews at Bari are merely trying to recreate the well-known local phenomenon known ‘Heel Mist’, a springtime fog that comes in from the Adriatic Sea and shrouds the coastline, we can’t give them any more points for this attempt. 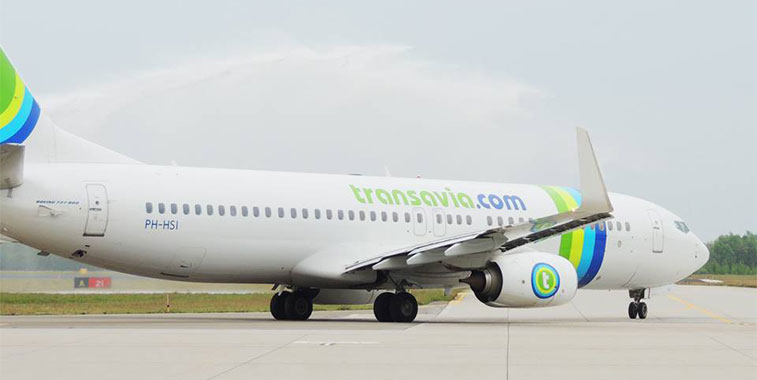 Half a tail and half a FTWA for this Eindhoven effort. 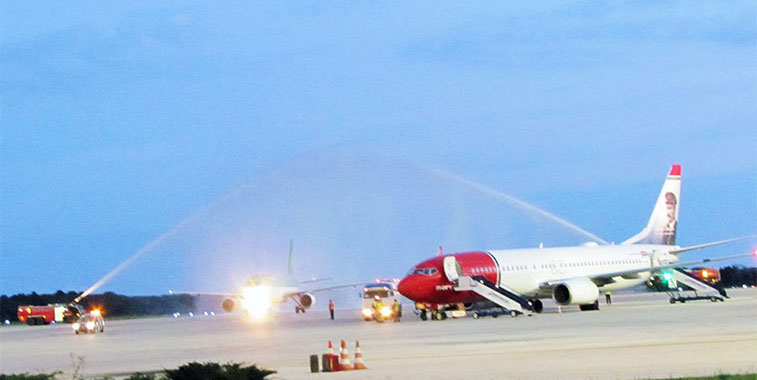 Judge’s comments: Maybe it’s the same photographer working in Lamezia Terme, Thessaloniki and here in Pula, as we have another cluttered, long-range shot of the aircraft in question — with the Aer Lingus machine just visible in the middle distance. But for that error, this FTWA would have scored better. 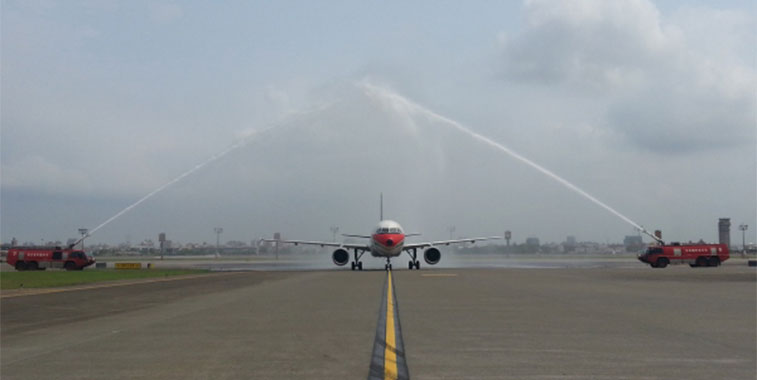 A smiling aircraft for a good FTWA from Kaohsiung.

Judge’s comments: With one win already under its belt in 2014, we should expect a decent display from the firecrews at Kaohsiung — and that’s exactly what we have got. However there is a smidge too much of ‘Tobleroning’ for our liking, but that really is the only thing that let’s this effort down.