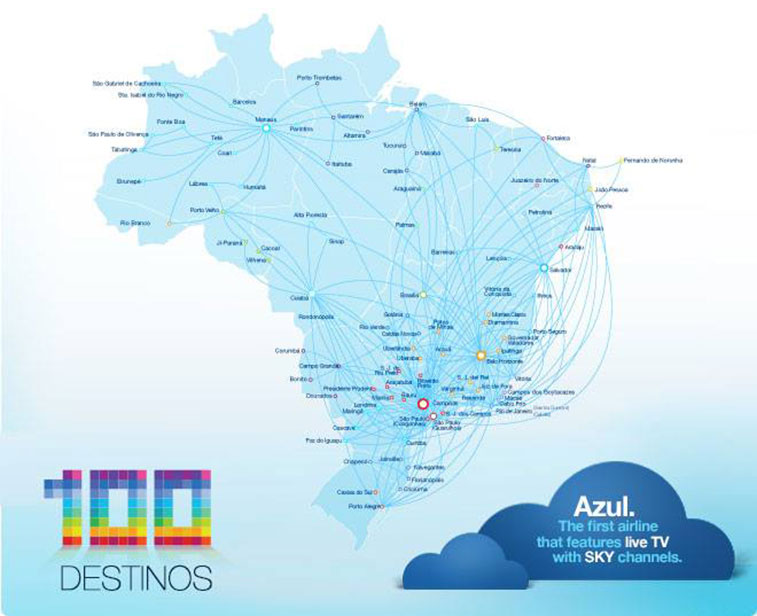 Azul Airlines continues to expand rapidly, operating over 100 domestic destinations this April, with the majority being served from its two hubs ― Sao Paulo Viracopos and Belo Horizonte. However, the airline is set to become the first LCC in the Americas to commence long-haul services to the US, with the delivery of its first A330-200s from early 2015.

Founded in May 2008 by David Neeleman ― co-founder of WestJet and JetBlue Airways ― Azul Airlines is a Brazilian domestic low-cost carrier headquartered at Sao Paulo Viracopos. The airline has been growing impressively in recent years as April 2014 capacity results in almost 200% growth when compared to the corresponding month three years ago, the month it began commercial operations from Viracopos to both Salvador and Porto Alegre. With nearly 21% of weekly domestic seats (according to Innovata schedule data for week commencing 22 April 2014), Azul has established itself as the third largest operator in Brazil, behind GOL and TAM Airlines. As part of its 2014 network expansion, the airline launched on 26 April five new routes from Ribeirao Preto and Recife, all of which are operated weekly using its E195s.

Examination of traffic data facilitated by ANAC (National Civil Aviation – Brazil) indicates that Azul handled over 13 million passengers last year, representing an increase of almost 32% over 2012 figures. In fact, 2013 was an excellent year for Azul, as ASKs went up 31%, cargo increased by 150% and the load factor grew by 1% to over 80%. On 28 May 2012, the airline announced the acquisition of the regional carrier TRIP Airlines, with whom it started comprehensive code-share services from December 2012. Following the complete integration of its subsidiary by late April to mid-May 2014, it will operate a mixed regional fleet of 10 ATR 42s, 47 ATR 72s, 22 E190s, 53 E195s and a single E175, but plans to incorporate 11 more aircraft into its fleet by 2017, as it looks to expand in the long-haul market.

Viracopos-Santos is #1 route by seats

According to Innovata schedule data for this April, the carrier operates 201 non-stop routes to over 100 destinations. Regarding its most significant services, the top 13 airport pairs account for 14% of all weekly seats, representing a 1% increase from last year’s figures, with Viracopos-Rio de Janeiro Santos maintaining its top position in 2014. Neither Sao Paulo Guarulhos, nor Sao Paulo Congonhas offered the LCC much scope for growth when it launched in 2008, therefore, the carrier based its operations at Viracopos, located around 100 kilometres away from the largest city of Brazil. Azul’s two hubs, the other being Belo Horizonte, dominate the LCC’s largest airport pairs in terms of weekly seats, with just Guarulhos-Santos and Guarulhos-Porto Alegre (highlighted in the chart below) being the only routes in this year’s ranking not to feature either of its two main bases. 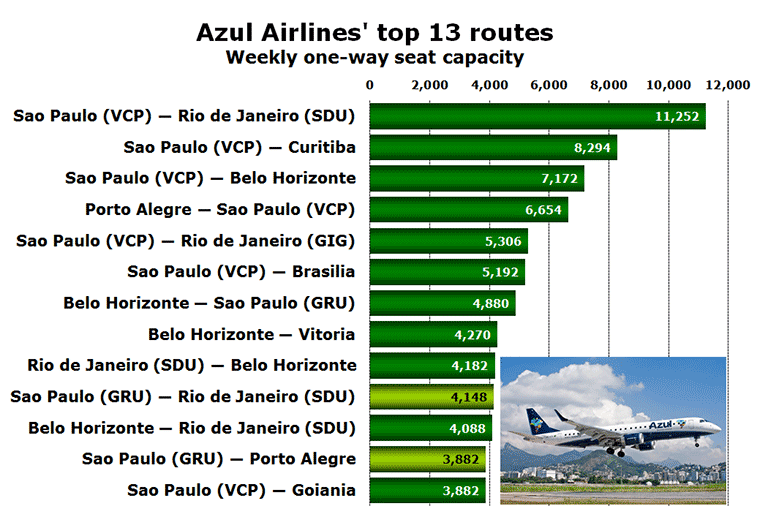 Azul’s weekly seat capacity noted 4% growth when compared to data from the same week last year, with just the link between Viracopos and Belo Horizonte posting a decrease (-29%) from the top 13 routes. On the other hand, the 864-kilometre sector from Guarulhos to Porto Alegre is not only a new entrant into this year’s graph, but also the fastest growing service, having increased by almost 450% or 3,174 weekly seats in the past 12 months.

Analysis of Innovata weekly flights being offered by Azul from individual airports reveals that the LCC is growing this summer at three of its top 12 airport bases. The carrier’s two hubs, accounting for a combined total of 1,521 weekly flights, will both see modest frequency decreases of 1% and 1.8% respectively, coming as a result of diversifying its domestic network. Besides this, Recife ― one if its focus cities ― will witness the greatest decline, as the carrier will trim a total of 46 weekly flights (-24%) from its schedule. 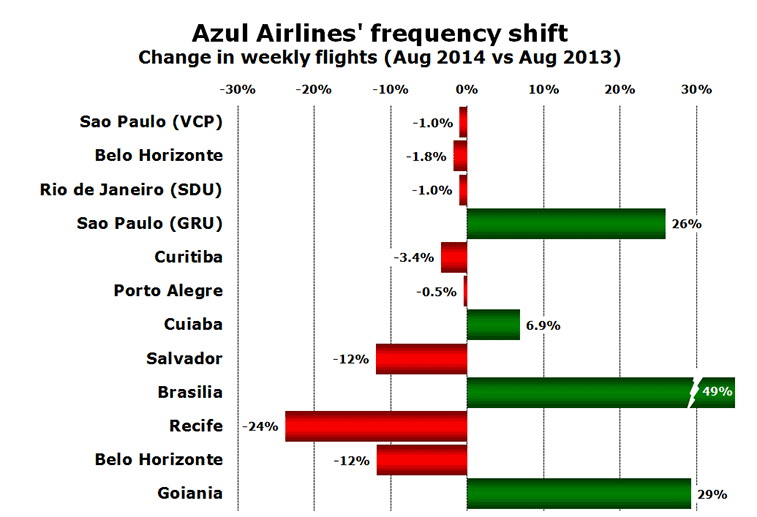 By comparison, the airline is expanding hugely at Brasilia, with the airport experiencing an impressive growth of 49%, following the introduction of services to Cuiaba, Palmas, Ribeirao Preto and Santos for S14, when compared to last year’s summer schedule. Furthermore, the number of weekly departures across its network is expected to go down by 2.5% this summer.

As part of its continuous expansion plan, Azul will see a total of 11 wide-bodies join its fleet in the coming years, with six second hand A330-200s and five new A350-900s being added. The LCC announced on 23 April that it will commence long-haul services from early 2015 from its Viracopos hub to the US, utilising the A330-200s that will be delivered next year. Taking into consideration the link it has with JetBlue, the Brazilian operator will likely inaugurate flights to Orlando, Fort Lauderdale and New York JFK, all three classified as major hubs of the American operator.

Commenting on the international expansion, Neeleman said: “Our customers have been asking for this and now we look forward to providing them with our superior service on international flights, just as we have been doing today on our 880 daily domestic departures. We are excited to share the Azul experience with new customers internationally and expand the airline’s success story beyond Brazil’s borders.”