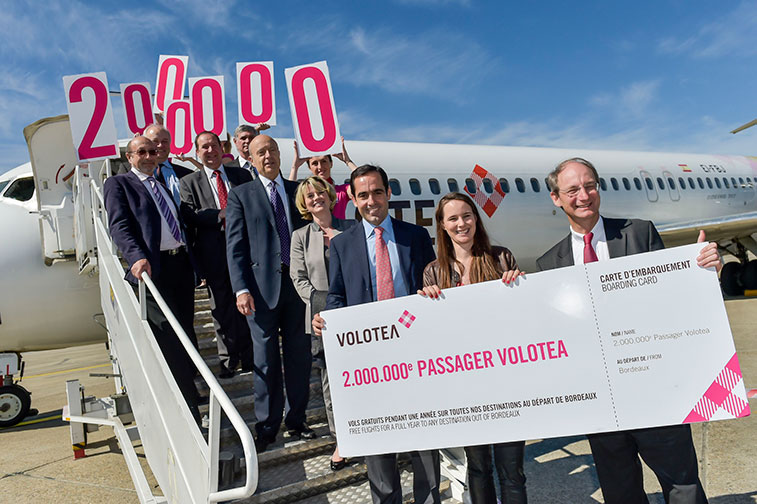 Volotea is the fastest-growing airline for international services at the biggest French regional airports, with seat capacity up 55% this summer. The airline recently celebrated at Bordeaux carrying its 2 millionth passenger since it launched services in April 2012.

As Air France continues to focus on its main hubs in Paris, anna.aero this week takes a look at international services from all those French airports handling over one million passengers annually, excluding Paris Orly and Paris CDG. That leaves a total of 14 airports ranging from Nice (11.6 million passengers in 2013) to Brest (1.004 million). A comparison of schedule data for August 2013 and August 2014 reveals that Nice, Marseille and Lyon are the leading French regional airports for international services. Six of the 14 airports are reporting double-digit growth, with Bordeaux the largest of these. Last year’s host of French Connect reports a 24% increase in international seat capacity, thanks in part to the launch of several new routes by easyJet and Volotea, and the arrival of Turkish Airlines’ four times weekly service from Istanbul. 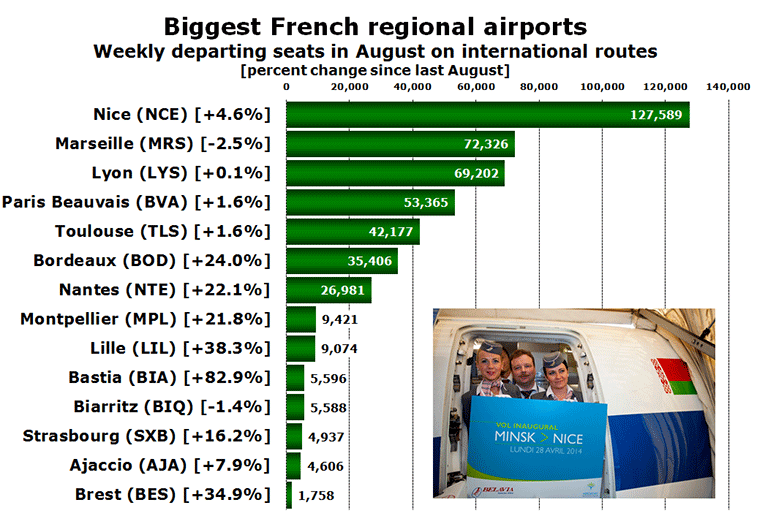 Bastia’s impressive international seat growth of over 80% is helped by easyJet’s new Basel service and an increase in weekly frequency of its Geneva service, while Vueling is offering flights for the first time to Barcelona and Rome Fiumicino. In total across these 14 airports, scheduled international seat capacity is set to grow by around 6% this summer.

This summer easyJet has overtaken Ryanair to be once more the leading airline for international services across the biggest French regional airports. Europe’s two biggest LCCs share almost 35% of international seat capacity, with both Lufthansa and British Airways beating Air France, who languish in fifth place, having cut capacity in these markets by more than a quarter in the last 12 months. Incredibly, British Airways with seven routes from London airports to five French airports, offers more weekly seats and flights on international routes from French regional airports than Air France, despite the French flag-carrier offering 29 routes. Once HOP! and transavia.com France services are added in, the Air France Group still only accounts for 7.3% of the capacity in this market. 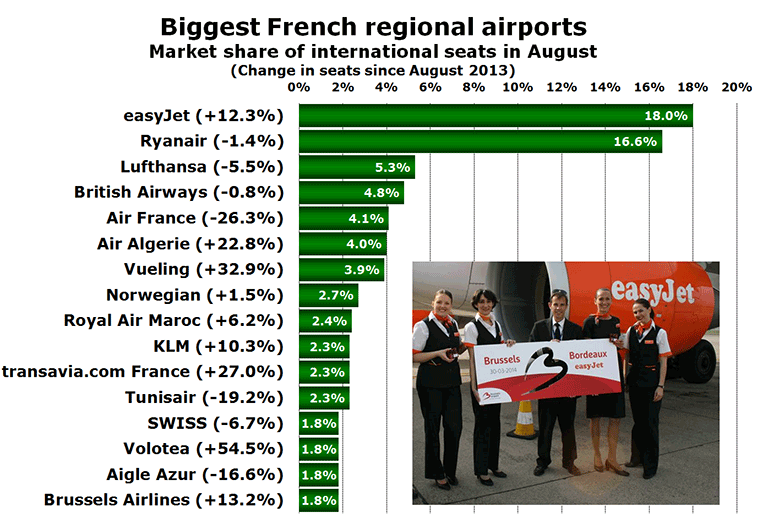 Vueling (+33%) and Volotea (+55%) are the fastest-growing airlines in this market. If Vueling maintains this rate of growth for another year or two it may jump into third place. Confirming the importance of the low-cost market to these airports, Air France’s own in-house LCC, transavia.com France, has seen its seat capacity grow by 27% in the last year, though its total share of the regional market is still only just over 2%, as its main base continues to be Paris Orly.

If ASKs (Available Seat Kilometres) are used instead as the measure of capacity, Air Transat (which offers low frequency transatlantic flights to Montreal) would then rank fourth behind Ryanair, easyJet and Air France.

This year French Connect becomes Connect, and while retaining a strong French flavour, the venue will be Marrakech in Morocco from 3-6 June, and the programme will include debate and presentations from speakers from all across Europe and North Africa. anna.aero is once again delighted to accept the responsibility of giving a keynote address, and will also be involved in a one-on-one with Ryanair’s former deputy CEO and COO Michael Cawley, who is now Non-Executive Director of the airline. anna.aero will also be producing two on-site magazines for delegates. So if you haven’t already booked your place, what are you waiting for?