Jetairfly looks to France for expansion in 2014; new routes from Brussels airports to Miami, Prague and Tel Aviv as ASKs to grow 11% Scissor sisters. Jetairfly added Miami to its network on 5 April with the introduction of twice-weekly flights from Brussels using the airline’s 767. Ribbons were cut to celebrate the event at both ends of the route, and there was also a fantastic cake in Miami.

Jetairfly is a Belgian airline which is part of TUI Travel PLC, the world’s largest tourism group. Last year the airline, which began operations in March 2004 with five aircraft, transported 2.78 million passengers. This year that number is expected to rise with the airline’s fleet currently comprising 23 aircraft, including a solitary 787 (currently used on routes to the Caribbean), one 767-300ER, 15 737-800s, four 737-700s and two E190s.

Not surprisingly the airline’s biggest base of operations is in the Belgian capital, with significant networks from both Brussels’ main airport, and also Brussels Charleroi. Jetairfly also operates flights from other Belgian airports including Liege and Ostend. 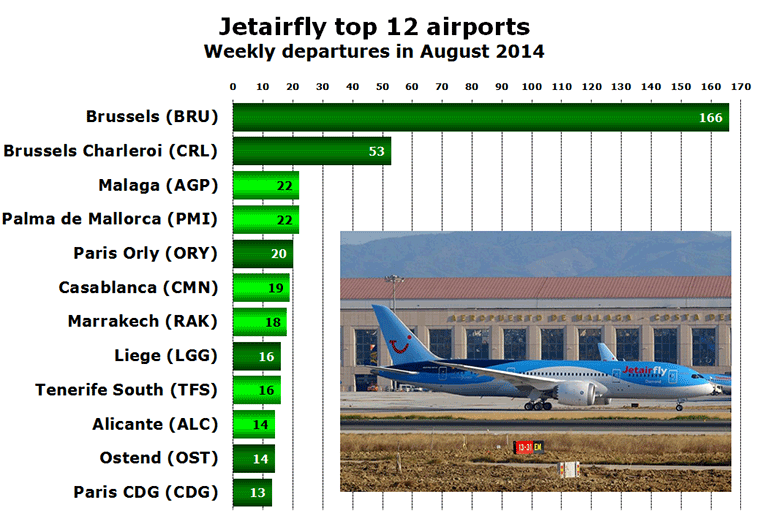 Based on schedule data for this coming August, the airline’s leading destinations (highlighted in bright green) are in Spain (Alicante, Malaga, Palma de Mallorca and Tenerife South) and Morocco (Casablanca and Marrakech).

Analysis of Innovata / Diio Mi schedule data for August 2013 and August 2014 indicates that Jetairfly will be operating to 108 airports this summer, the same as last summer. However, eight airports have been dropped (Barcelona, Bristol, Edinburgh, Glasgow, Istanbul Sabiha Gökçen, Manchester, Marsa Alam and Sharm El-Sheikh) to be replaced by eight others (Amsterdam, Cork, Miami, Mombasa, Münster/Osnabrück, Prague, Strasbourg and Zanzibar). The highest profile of these new additions is Miami. Twice-weekly flights from Brussels were launched on 5 April using the airline’s 767. Other new routes launched with at least two weekly flights include Brussels-Tel Aviv, Brussels Charleroi-Prague, and Paris CDG to Malaga, Palermo and Olbia. This takes the airline’s network to over 160 routes, with an average weekly frequency of just two flights per week. 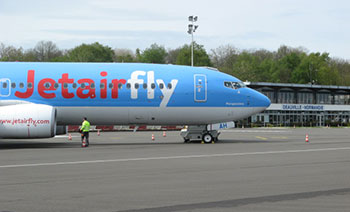 Expanding over the border. Belgian leisure airline Jetairfly’s expansion in France this summer includes new routes from Deauville to Malaga, Olbia and Palma de Mallorca, which all launch in April.

Focus on France for S14 expansion

This summer has seen Jetairfly increase the number of weekly flights at Paris CDG from just one to 13, while Deauville, Lille and Metz-Nancy have all seen the introduction of new routes and a year-on-year increase in weekly flights. Across the whole network this summer seat capacity (and the number of flights) are both up around 7%, while ASKs (which take into sector length) are up around 11%. Routes operated last summer that have not returned to the airline’s network in 2014 include Brussels Charleroi to Istanbul Sabiha Gökçen (now served by Pegasus Airlines), Liege to Tel Aviv, and Marseille to Casablanca.