US-Germany capacity grows 3.9% this summer; Lufthansa dominates with 50% of seats United Airlines, the second largest provider of seat capacity between the US and Germany (as of 12 August 2014), commenced daily operations from Houston Intercontinental to Munich on 25 April. This is United’s fourth route to Munich as it already serves the capital of the German state of Bavaria from New York Newark, Washington Dulles and Chicago O’Hare.

The air travel market between two of the world’s largest economies, the US (1st) and Germany (4th), appears to be once again growing after being affected by the global economic recession in 2009. Examination of data facilitated by the US Bureau of Transportation Statistics (BTS) indicates that traffic between the two countries grew by 27% in 2012, when compared to 2004 figures. This country pair noted 9.7 million passengers in 2012 (a new record high), a number that has increased significantly from the 7.6 million recorded 10 years ago in 2004. 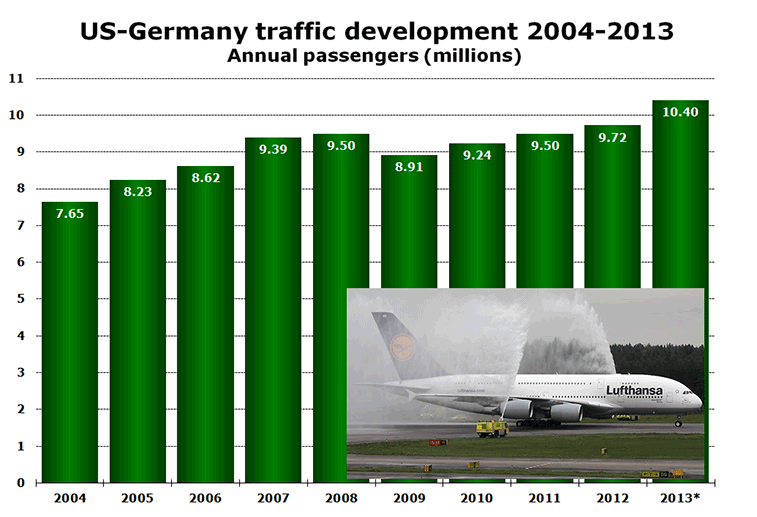 In the first 10 months of 2013, the passenger numbers between the US and Germany recorded an increase of 7% when compared to the corresponding period of the previous year, with 8.7 million passengers achieved until end-October. If the country pair’s traffic continued on this growth trajectory, it would achieve over 10 million passengers for the first time in 2013, based on anna.aero forecasts.

German carries have 64% of weekly seats

According to Innovata schedule data for week commencing 12 August 2014, seat capacity between the two countries is up 3.9% this summer, following the introduction of a raft of new services that have started in recent months, including United Airlines’ daily flights from Houston Intercontinental to Munich on 25 April. A total of four carriers serving this country pair have noted capacity increases, while American Airlines has seen its operations unchanged. The three German airlines account for 64% of all weekly seats, which is up 2% from the corresponding week last year. This is because the four US carriers (United, Delta Air Lines, US Airways and American) have grown their combined seat capacity by a modest 0.5%, while the German operators have increased their offering by 6.6%. 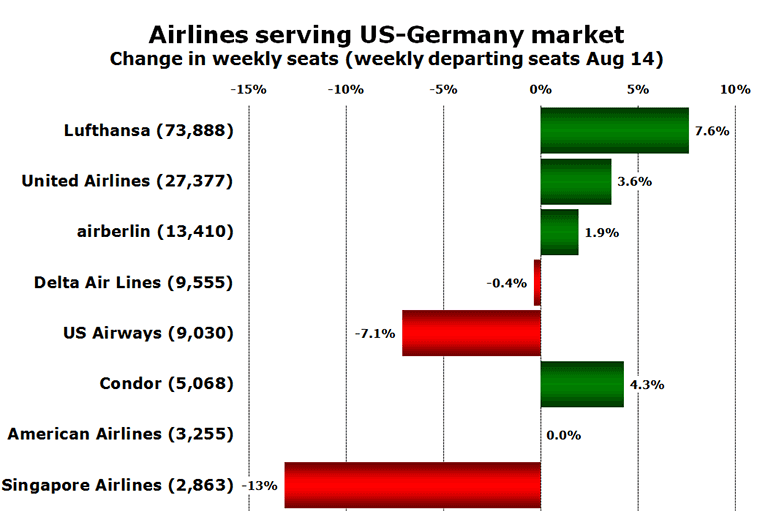 Lufthansa, commanding half of weekly capacity, is not only the dominant carrier in this market, but also the fastest growing one, with an annual growth in weekly seats of 7.6%. The second and third place airlines have remained unchanged, while US Airways has given away fourth position to Delta, following a 7.1% reduction in weekly seats (-693) when compared to August 2013. Another mover in this market, Singapore Airlines, provided the largest reduction in the number of seats since last year (-13%) and dropped one position. In fact, Singapore is the only non-US and non-German carrier to operate in this market, offering Frankfurt to New York JFK daily flights, following its twice-daily A380 operations from its Singapore hub to the German gateway. The capacity decline comes as a result of the carrier switching its 471- seat A380 for a lower seating configuration A380 (409 seats) that features a greater number of premium class services.

Frankfurt dominates with 63% and 58% of seats and flights

Examination of Innovata weekly schedule data for this April reveals that Frankfurt is the largest German destination for US traffic, with around 63% and 58% of weekly seats and flights respectively. Out of its 19 US destinations, JFK is the most frequently served airport with a combined total of four daily flights from Delta, Lufthansa and Singapore.