Australia’s international market is up almost 7% in the last 12 months. The fastest-growing airports for international traffic are Adelaide (+25%) and Perth (+9%), though Sydney remains the busiest international airport by far. Perth’s growth was helped by the launch in mid-December of five times weekly flights from Singapore Airlines’ long-haul, low-cost subsidiary Scoot.

Australia’s domestic air travel market grew by a modest 1.8% in 2013 to reach 57.5 million passengers. The country’s international air travel sector showed rather healthier growth, up 5.9% to 31.4 million. In January 2014, international traffic was up an impressive 10.5%, the first double-digit increase since March 2012. How much of this was down to English cricket fans returning home in disgust at their team’s 5-0 thrashing by the home team in the test series is not clear.

Among the country’s top 10 domestic routes nine reported growth in the year-ending February 2014 (the latest available data), with Melbourne-Hobart (+8.5%) leading the way, and only Melbourne-Gold Coast (-4.5%) reporting a decline. With almost 8.3 million annual passengers, the Sydney-Melbourne route remains by far the country’s busiest air route (and one of the busiest in the world), and grew by 1.7% in the last 12 months. 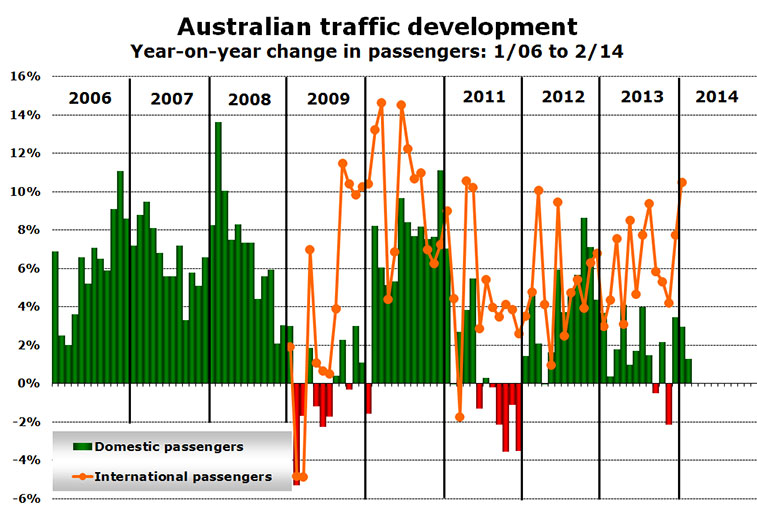 According to the latest BITRE figures for January 2014, Qantas has just 16.0% of the international market followed by Emirates (9.3%). Jetstar Airways and Singapore Airlines were tied in third place with 8.4% each. Combining Qantas and Jetstar still gives the Qantas Group of airlines less than one-quarter of the Australian international market. The biggest gainer in terms of market share is AirAsia X which has increased its presence from 3.4% in January 2013 to 4.9% in January 2014.