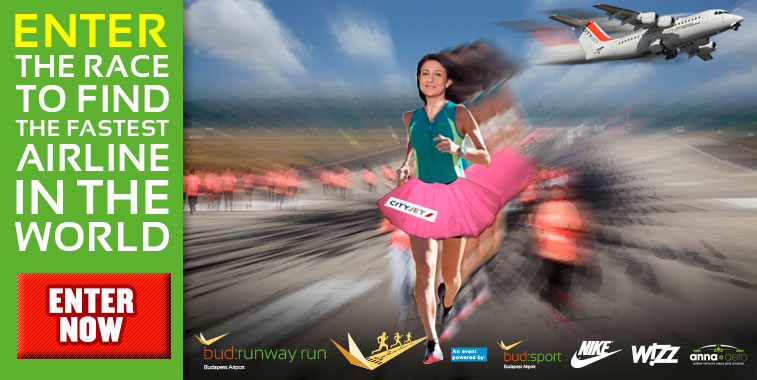 CityJet CEO Christine Ourmières is now favourite to win “Fastest Airline CEO” in bud:runway run, not merely because she is the first female airline CEO to join the race (we do have other airline CEOs who want to join the female entry category) but because the feisty French airline boss is also verrrrrry zippy – producing a very good 4.29 in last month’s Schneider Electric Marathon de Paris.

Christine Ourmières, the marathon-running CEO of CityJet has announced she will lead the Irish-domiciled European regional airline’s bid to win “Fastest Airline in the World” in the 12km running race taking place on Budapest Airport’s Runway 13R-31L on Saturday 6 September, a charity event in aid of child cancer charities, and other good causes organised by Budapest Airport, Wizz Air and anna.aero. 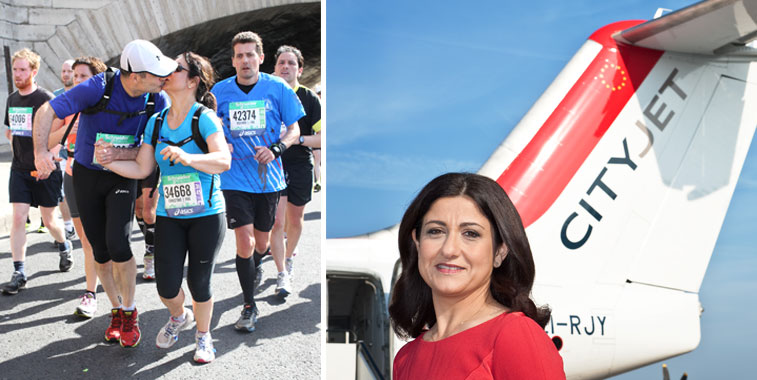 CityJet’s confident Ourmières has time for a comfort break with team mate and husband Floyd Widener (a senior Carlson Wagonlit executive) in last month’s Schneider Electric Marathon de Paris which she completed in a speedy 4.29.

The CityJet entry comes after a big news week for the airline which announced on 1 May its new-found independence as a European regional carrier through brand-new shareholder, INTRO Aviation – the company behind Eurowings, the turn-around of Deutsche BA (dba), LTU, and also the main shareholder in Austrian regional airline InterSky (which is also led by a female CEO, Renate Moser – less than half a dozen airlines in greater Europe are run by women). INTRO’s investment means that CityJet, which operates 700 flights a week from its operational hub at London City Airport, and satellite networks from Cardiff Airport and Cambridge Airport, now begins life again debt-free. Key elements of the new business plan discussed in Dublin include fleet renewal for the 18 Avro RJ85s “as soon as possible” and a “complete rebrand for the Irish based airline to create its own unique identity with a centre of activity from London City Airport.”  The reveal for the new logo, look, and livery is set for June. “CityJet has an enormously talented and qualified management team and staff,” said Ourmières to anna.aero. “Together, with our new shareholders, INTRO Aviation, we are very confident in our future success, not only as a strong, independent regional airline, but also as the tremendously motivated winners of this race.” 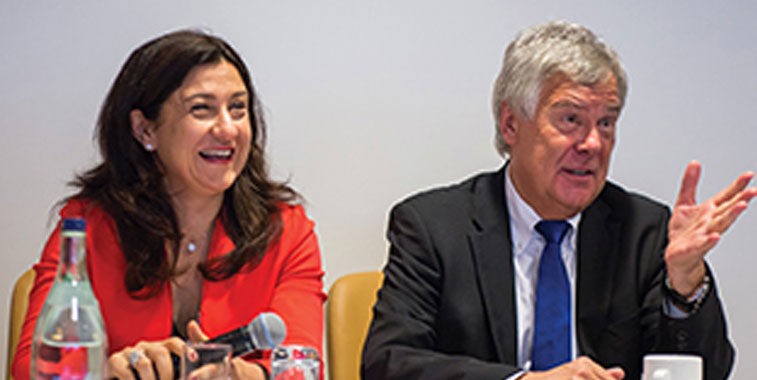 Dublin 1 May 2014: Christine Ourmières, CEO of CityJet, alongside Hans Rudolf Wöhrl, CEO of INTRO, and now also Chief Advisor of the CityJet Board, following INTRO’s investment in the Irish-domiciled carrier. A rapid replacement of CityJet’s RJ85s and a brand relaunch in June promise to quickly put INTRO’s stamp on the carrier.