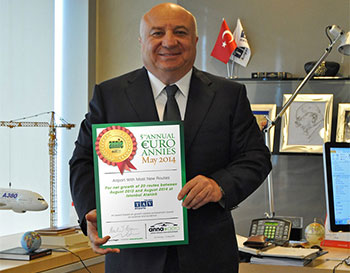 In an almost identical pose to his picture from last year, when Istanbul Atatürk won a Euro ANNIE for colossal 21% growth in the >10 million annual passenger category, Dr Sani Şener, President and CEO TAV Airports Holding is equally as proud this year to be clutching his ‘Airport With The Most New Routes’ certificate for 2014. The Turkish capital city airport netted 20 routes over the last 12 months, starting 27, but losing seven.

It’s Part I — The Airport Awards Section — of the last batch of anna.aero awards in 2014, culminating in the Euro ANNIEs (next week, Part II — The Airline Awards Section). These awards are probably more eagerly awaited across Europe than the annual winners of Eurovision, the Champions League and Bulgaria’s National Flower Arrangement Contest (which recently took place in Plovdiv) combined. The time has come for the fifth Euro ANNIEs, which this year has 10 awards allocated to eight winners (the astute ones among will you will have realized someone has won more than one award) for their outstanding achievements in network development and airport growth in the European region over the past 12 months.

Our awards are based on science, statistics and evidence rather than people’s opinions (and votes). Using Innovata schedule data for 12-18 August 2014 compared to 13-19 August 2013 across nearly 650 airports operating in the European region, our crack team of data elves have pored over the figures and we think we have come up with a more transparent way of rewarding airports that have achieved notable route and traffic related success in the European region during the last year.

Airport with most new routes

The Turkish capital airport beat Europe’s capital to this award by just two new routes, having gained a net of 20 new routes, when comparing this August’s Innovata data with that of the corresponding month last year. Istanbul Atatürk actually gained 27 new routes since last August, but as it lost seven destinations, namely Edremit in Turkey (previously operated by Atlasjet), New York Newark (United Airlines), Heraklion (Aegean Airlines), Krasnodar (Yakutia), Urmieh in Iran (Onur Air), Paris Orly (Air France) and Santiago de Compostela (Turkish Airlines) its impressive return was slightly dented. The new routes are notably a healthy mix of global links, including 13 European services, seven to Africa, four to Asia, two to the Middle East and one to the Americas.

Brussels is the runner-up, having gained 18 airport pairs, driven predominantly by fresh growth from Vueling and Ryanair. As a result, the airport’s network has grown from 164 destinations last August, to there being 182 on the Belgian capital city books this summer.

Airport with most new long-haul routes

In this category, the definition of a long-haul route is a flight of over 4,500 kilometres originating from the European region (Innovata data suggests that there are 73 airports in Europe with such long-haul services), with the French capital airport securing the first of three awards in 2014. Paris CDG has gained a net of six (growing from 88 to 94) new routes over 4,500 kilometres in the last year, acquiring seven and losing one. Home-based and nation’s flag carrier Air France is responsible for five of the new routes, adding services to Brasilia, Panama City, Cayenne, Djibouti and Bangui since last August. Complementing the SkyTeam airline’s growth were Turkmenistan Airlines, launching services to Ashkhabad, as well as Hunnu Air, which has added Paris CDG to its network with a twice-weekly operation from Ulaanbator. Indeed, the French capital city becomes just the third airport in Europe with a connection to the capital of Mongolia, joining Frankfurt and Moscow Sheremetyevo. Paris CDG’s only long-haul route lost since August 2013 was the removal of XL Airways France’s weekly A330 operation to Puerto Plata.

Finishing as runner-up once is bad, but twice is much, much worse. Coming second to the same airport must therefore be downright infuriating – that’s exactly what has happened to Madrid. The Aena-operated hub was just one new long-haul route behind Paris CDG (net of five), surely adding further frustration to its situation.

Airport with the most new carriers

Split last year between three airports (Düsseldorf, Malta and Warsaw Chopin), this time the victory was more clear-cut. Award #2 for Paris CDG, the airport has attracted 16 new airlines over the past 12 months, but has lost four in the same period. The 12 new airlines are a real mixture, with start-ups (Air Go Airlines Egypt), flag carriers (Turkmenistan Airlines), regionals (eurolot), traditional scheduled (Jet Airways) and scheduled/charter carriers (Thomas Cook Airlines Belgium) all represented – but no low-cost (argue amongst yourselves if you consider germanwings as being an LCC — we don’t believe it is). The airport lost four carriers over the last 12 months, including Tunisair, which has chosen to consolidate its operations into Paris at nearby Orly.

In terms of the two runners-up, Madrid takes second spot again, this time sharing the honours with Prague. Both airports managed to gain a net of seven airlines each, and they also held off a host of challengers for the #2 position with Frankfurt, Athens, Ibiza, Larnaca and Lyon all gaining a net of six new airlines since last August.

Airport with most scheduled airlines (the anna.aero Spotters award)

Affectionately known as the anna.aero Spotter’s Award, the ‘Airport With Most Scheduled Airlines’ was again won by Paris CDG, which stole this award from Rome Fiumicino last year. Indeed, the Italian capital city airport has now slumped to #3 place, being leap-frogged by Frankfurt, which now boasts 98 operating airlines. However, it is the Parisian hub, growing from 97 serving airlines last August, to the 109 anticipated during this summer, which will see plane spotter’s flocking to the airport to track down that elusive tailfin for their notepads. 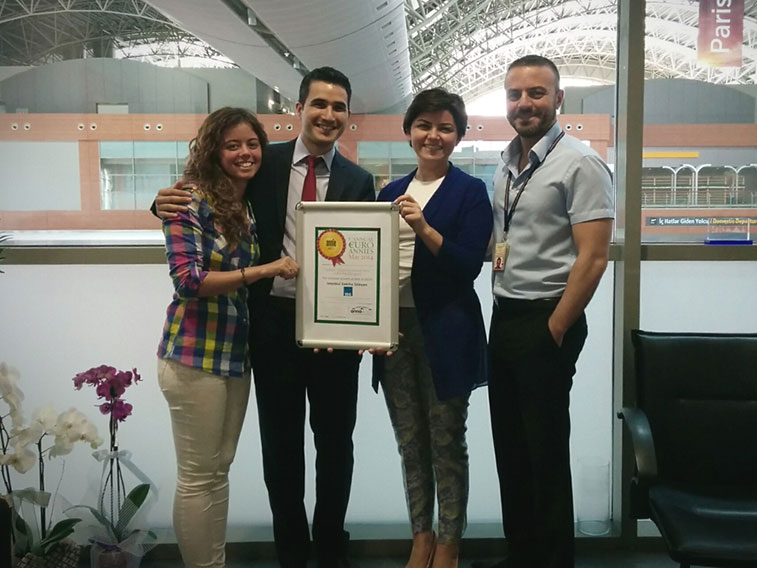 Thanks to anna.aero’s comprehensive, free, downloadable database of airport traffic statistics which includes well over 300 airports across Europe, we have been able to identify the fastest-growing airports in pure passenger terms in six different size categories. The award in the biggest category (>10 million passengers) goes to Istanbul Sabiha Gökçen (growing by nearly 30% year-on-year), claiming the title from the airport across town — Istanbul Atatürk — which scooped the top prize last year. In fact, the fast-growing country secured this winner’s position, along with three runners up places in this year’s awards. In the smallest category, 100,000 to 1 million annual passengers, London Southend and Sumburgh on the Shetland Islands delivered an impressive one-two for the UK. 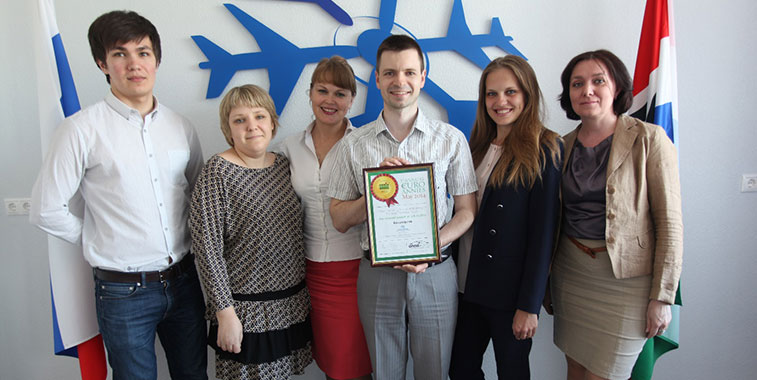 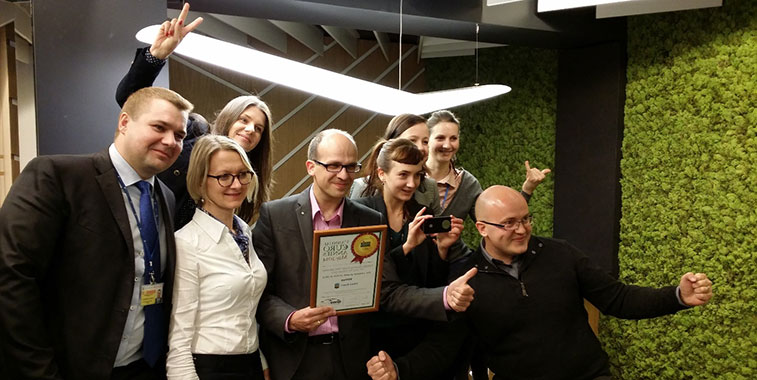 Lithuanian selfie! “Yabaaa-dabaaa-dooo!!! What a surprise my friend. It is always a thrill to be a winner of something”. This was the response anna.aero received from Vilnius Airport when it found out it had won a Euro ANNIE for airports in the 2-3 million annual passenger category. From left to right are: Renatas Aukstuolis, Head of Operations; Jurate Sakiene, Manager Aviation Services Division; Jurate Baltrusaityte, Director, Commerce Department; Marius Bruzas, Director, Administration Department; Greta Babarskaite, Communication Coordinator; Rita Bagdonaite, Assistant to MD; Inga Jankauskaite, Route development fund coordinator; and Evaldas Malakauskas, Head of Aviation Services Division. 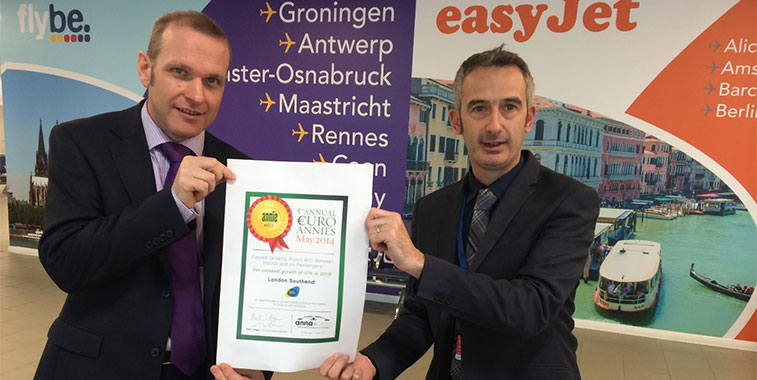 “We are delighted to win the award,” said Paul Haynes (right), Business Development Manager at London Southend Airport, along with Operations Director David Lister (left). With an impressive 57% growth in 2013, the airport won the 100,000–1 million annual passenger category.

For airports, we have six prizes based on total passenger traffic data for 2013 (compared with 2012) in various airport size categories, plus another three awards based on Innovata schedule data for August 2014 (two of which require comparison with the August 2013 data to determine the winner). When determining the number of ‘new’ routes or airlines, we have decided to look at net gains and losses, so that lost routes or airlines are deducted from those gained. When determining whether a route or airline should be included in the data, a minimum requirement was set that the route had to be operated at least weekly (so four times per month) during the peak August month.