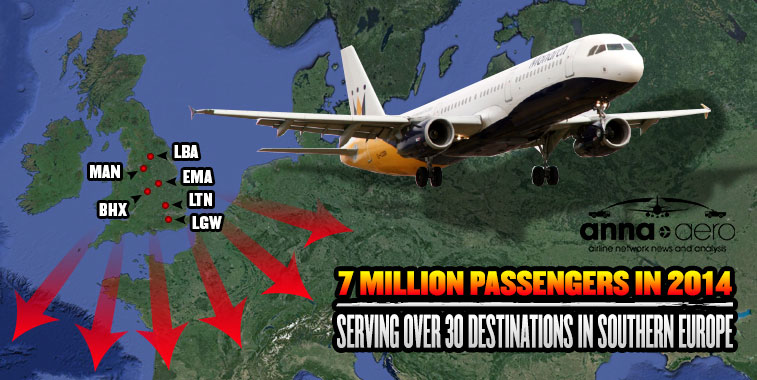 Monarch Airlines, the London-based leisure airline, has celebrated the start of May with the launch of 10 new routes. Since we last analysed the carrier its evolution from charter airline to scheduled airline has continued, while passenger numbers have risen. Between 2011 and 2013 the share of passengers carried on scheduled services has increased from 77% to 88%, while the total number of passengers carried has grown by almost 15% to over 6.8 million. With two additional A321s joining the fleet this summer (to bring the fleet size to 42 aircraft), the airline should easily top the seven million passenger mark for the first time this year. 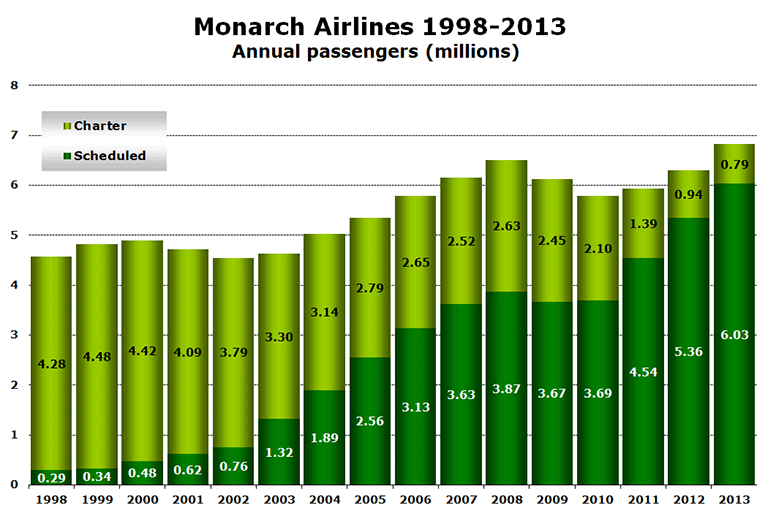 Monarch now has bases at six UK airports, the most recent being East Midlands and Leeds Bradford, both of which opened in 2012. These are still relatively small compared with the airline’s main bases at Birmingham, London Gatwick, London Luton and Manchester. The airline’s route network is still focussed heavily on Mediterranean and ‘summer sun’ routes, resulting in fairly extreme seasonality issues. In 2013, the airline transported four times as many passengers in August as it did in January. 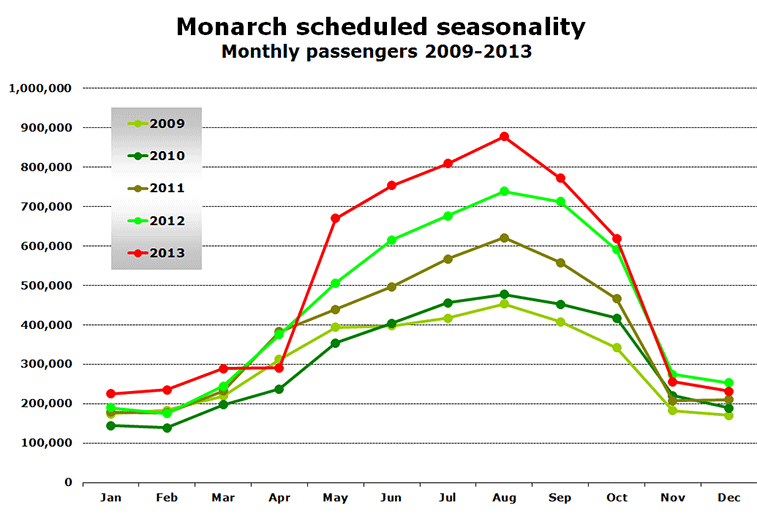 It is worth noting the impact of Easter dates on demand. In 2013, Easter was at the end of March, rather than in the middle or late April. This clearly supressed demand in April 2013. This year the Easter break was at the end of April, which should see the airline reporting a significant year-on-year increase. 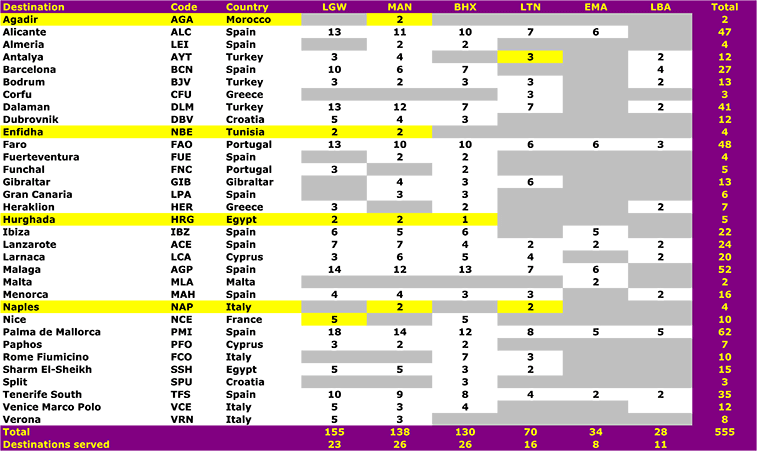 Based on Innovata / Diio Mi data for August 2014, London Gatwick remains the airline’s biggest base in terms of weekly departures (with 155), ahead of Manchester (138) and Birmingham (130). However, in terms of destinations served Birmingham and Manchester both offer 26, while the airline’s Gatwick network comprises 23 routes on scheduled flights. During the last week Monarch has launched 10 new routes from four of its bases (highlighted in yellow), including the first scheduled services to Agadir in Morocco, Enfidha in Tunisia and Hurghada in Egypt, as well as the return of Naples in Italy to the network.

Spanish airports still account for 54% of all flights with seven of the airline’s top 10 destinations being in that country, led by Palma de Mallorca (62 weekly departures from UK airports) and Malaga (52). The three non-Spanish airports in the top 10 are Faro (third with 48), Dalaman (fifth with 41) and Larnaca (tenth with 20). The only destinations served from all six airports are Faro, Lanzarote, Palma de Mallorca and Tenerife South. In the last two years scheduled services to Bordeaux, Milan Malpensa and Munich have been suspended, while other destinations served in the past include Granada, Jerez and Madrid.