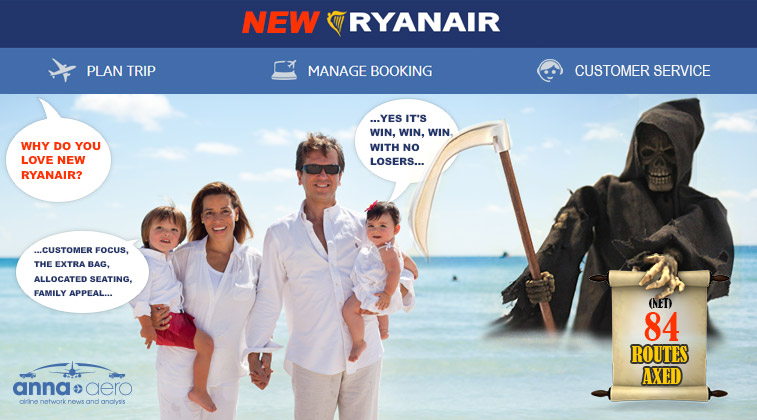 For the first time ever Ryanair has cut the number of routes operated – by a net 84 to 1,312. Although it started 138 new routes, Ryanair’s axe still fell on 222 other services. Big airports were the big winners; the losers were secondary/regional airports which had done so well since 2000. Purist EU regulators, who have acted on European regional airport subsidies to airlines like Ryanair, might be left wondering if this was really the market change they had intended.

If further proof were needed that Ryanair is truly changing, here’s a fact that might shock you. This summer the airline will be operating fewer routes than it did last summer. The number of flights (and hence seat capacity) will be up, but not by much (by less than 1% according anna.aero’s analysis of schedule data for the first week of August). Meanwhile, the number of routes operated will have fallen by a net 84, from 1,396 last August to 1,312 this August. Yes, Ryanair has still started 138 new routes that it was not operating last summer, but it has dropped a massive 222 routes. One consequence of this is that, for possibly the first time ever, the airline has seen its average weekly frequency grow on a year-by-year basis (that’s another anna.aero analysis coming soon).

A closer look at the data by airport reveals at which airports Ryanair has swung its route-chopping axe the hardest. Warsaw Chopin is misleading as the airport only transferred routes from Warsaw Modlin to Warsaw Chopin while the secondary airport sorted out a number of runway maintenance issues. All of these routes have now been relocated back to Modlin. However, Ryanair’s secondary airports serving such major cities as Barcelona, Düsseldorf, Frankfurt, Milan, Oslo and Stockholm have seen the biggest number of net route droppings (which takes into account new routes as well as dropped routes). 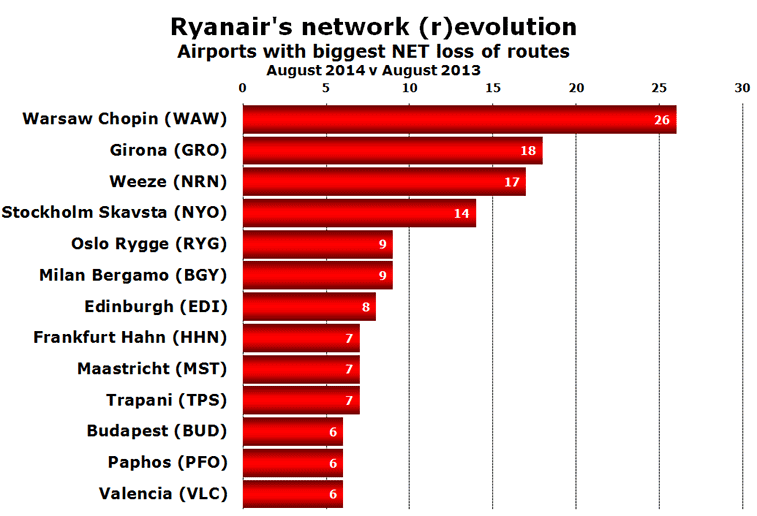 If instead of analysing the number of destinations served, we examine the change in the number of weekly departures, a similar pattern emerges of secondary airport losers, but with one notable addition: Brussels Charleroi now ranks third, as a result of the airline relocating some of its Brussels capacity at the EU capital’s main airport. 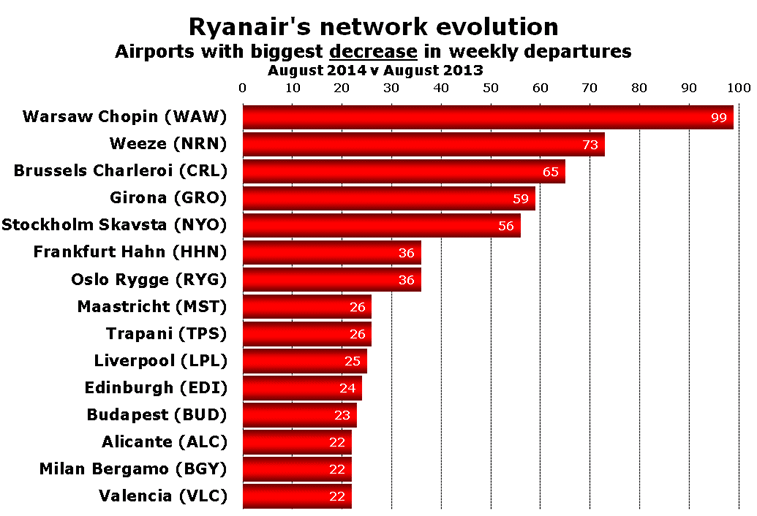 A look at the airports with the biggest increase in weekly departures, clearly confirms the fact that Ryanair’s new approach to network planning embraces operating from bigger airports with proven demand where the airline can grab passengers from existing airlines (as well as growing the market with cheaper fares). 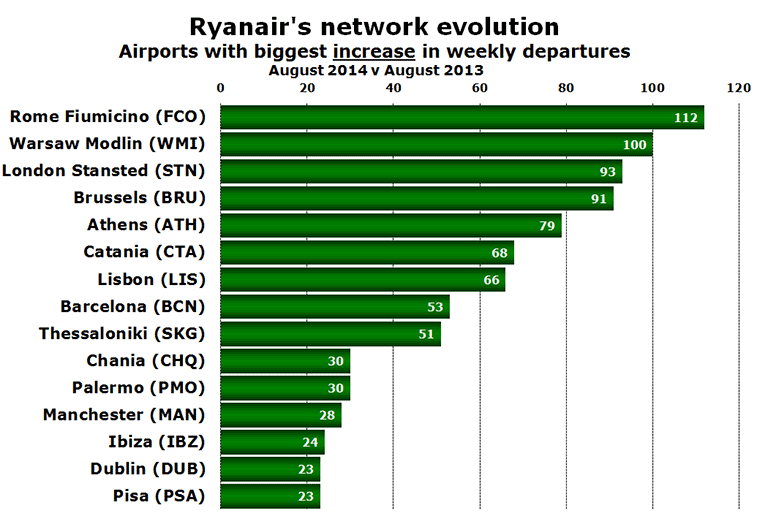 Top of the list is Rome’s Fiumicino airport which has seen major growth as well as the transfer of some capacity from Rome Ciampino. The main airports serving Athens, Barcelona, Brussels and Lisbon, all feature prominently as do two of the airline’s biggest bases at Dublin and London Stansted. Three Greek airports make the top 10, which may come as a surprise, but confirms the robustness of the holiday market to Greece. In terms of net gain of routes, Warsaw Modlin (26) beats London Stansted (11), Brussels (10), Lisbon (10) and Shannon (eight).

A total of 10 airports have been added (or in some cases returned) to the airline’s network since last summer. These are Athens (ATH), Brussels (BRU), Bucharest (OTP), Linz (LNZ), Lisbon (LIS), Osijek (OSI), Prague (PRG), Rennes (RNS), Rome Fiumicino (FCO) and Warsaw Modlin (WMI), which messes up our findings again for reasons explained.

It’s all very well to change the image of Ryanair with sensitive TV adverts, and customer service improvements so it becomes more family-friendly and trusted like Colgate-Palmolive, or Starbucks. But these changes to the route network are real and substantial evidence of the recent conversion. It’s quite likely that the reaction to Ryanair’s route cutting will be negative – it is certainly not good news for the secondary/regional airports concerned. But, were it a pharmaceuticals conglomerate rather than an airline, Ryanair would receive commentator praise for cutting less profitable products before they became seriously problematic, and for simultaneously avoiding job losses and parking planes by shifting capacity to newer, higher frequency services at bigger airports (you wouldn’t want to be in Alitalia’s shoes right now). And, let’s face it, Ryanair is still expecting a net 100 new aircraft to be delivered by 2018. So, with all this new capacity, there’s nothing to stop the ever-clever operator suddenly returning to all these axed routes; it’s done that sort of thing before after all.

This spread sheet shows the 222 Ryanair axed routes according to anna.aero’s analysis of Innovata schedule data for the first week of August. We include both ends of the route,  a-to-b and b-to-a, so it is 444 lines long. Remember that with 138 new route launches the net loss is 84 routes.