Air Corsica specialises in linking Ajaccio and Bastia with destinations in mainland France, but in April it also began weekly flights from both airports to Liege in Belgium.

Passenger numbers passing through Corsica’s four commercial airports passed the three million mark for the first time in 2013, and the rate of growth over the previous year (+7.8%) was the highest recorded since 1998. However, growth was not uniform across all the airports, with the two smaller airports of Figari and Calvi reporting traffic declines of 1.7% and 3.2% respectively, while the island’s two major airports at Ajaccio and Bastia both reported double digit growth. 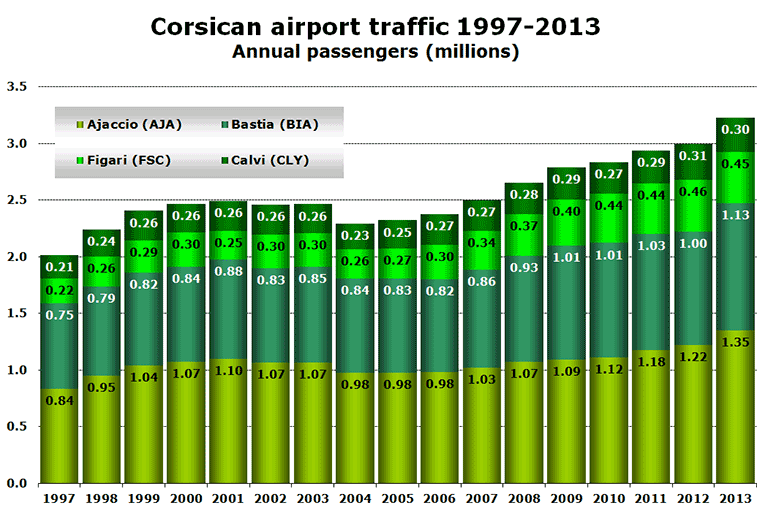 Passenger numbers on the island have grown year-on-year in each of the last nine years, with total demand in 2013 up just over 40% since 2004. According to schedule data, this summer is likely to see further growth of around 6%, assuming load factors remain at comparable levels to last year.

Demand is highly seasonal at all airports

Being a favourite holiday retreat for residents in mainland France, the island’s airports suffer from significant seasonality. While the two larger airports of Ajaccio and Bastia generate SVID scores of 27.51 and 24.38 respectively, Figari scores an alarming 74.71. This is not surprising given its passenger numbers in August of last year were almost 10 times higher than those it reported in February. 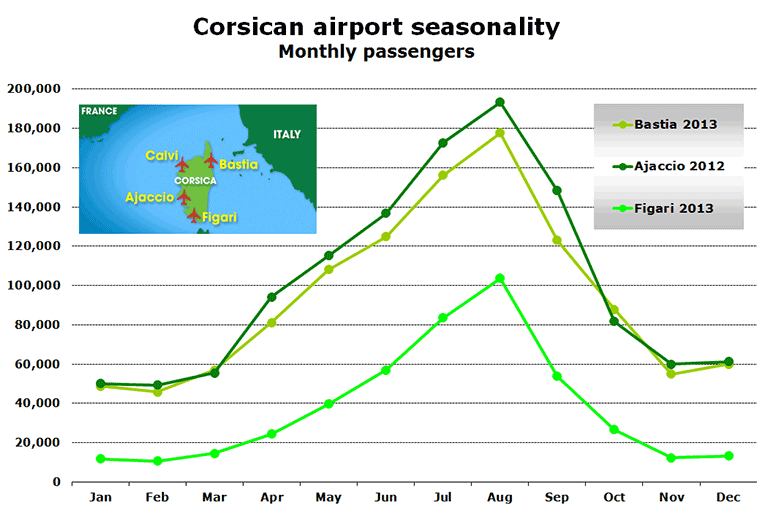 A comparison of Innovata / Diio Mi schedule data for August 2014 and August 2013 reveals that all four airports will be welcoming a range of new services and destinations this summer, some of which have already launched. Local carrier Air Corsica is responsible for several new routes from both Ajaccio and Bastia, concentrating on new services to additional French airports, but also Liege in Belgium.

This summer will also see additional new services from Calvi, including Air Corsica to Perpignan, airberlin to Düsseldorf, Etihad Regional to Geneva, germanwings to Cologne Bonn, Luxair to Luxembourg, and Volotea to Bordeaux and Nantes. Finally, Figari is also celebrating several new services including Brussels Airlines to Brussels, easyJet to both Lyon and Paris CDG, Ryanair to Paris Beauvais, and Volotea to Bordeaux and Nantes.