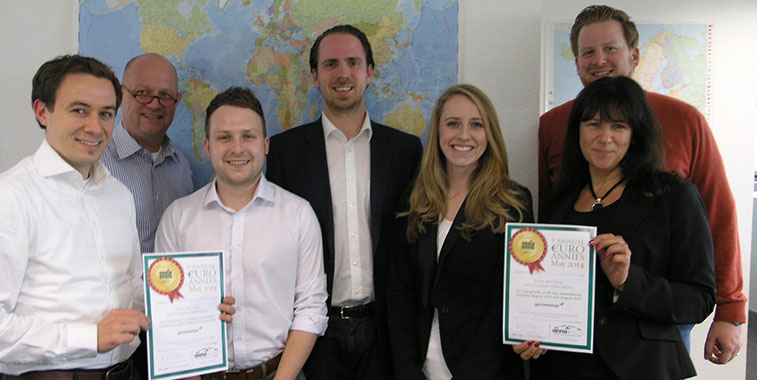 It’s Part II — The Airline Awards Section — of the last batch of anna.aero awards in 2014, culminating in the Euro ANNIEs (see here for last week’s awards — Part I — The Airport Awards Section). Perhaps the most shocking revelation is the fact that Ryanair was nowhere near the top of the class in our analysis, or in fact nestling comfortably mid-table, but languishing close to the bottom of the table with all the airlines that went bust in the last 12 months. So intrigued were we by this revelation that we unleashed anna.aero’s Chief Analyst Ralph Anker on the LCC’s data — the result is a separate analysis on Ryanair’s S14 schedule.

So, the time has come for the fifth Euro ANNIEs, which this year has four awards allocated to three winners (the clever ones among you will have realized someone has won more than one award) for their outstanding achievements in network development and route growth in the European region over the past 12 months.

Our awards are based on science, statistics and evidence rather than people’s opinions (and votes). Using Innovata schedule data for 12-18 August 2014 compared to 13-19 August 2013 from over 310 airlines operating in the European region, our crack team of data elves have pored over the figures and we think we have come up with a more transparent way of rewarding airlines that have achieved notable route and traffic related success in the European region during the last year.

Airline With The Most New Routes

germanwings winning this award, the first of two, has been the cause of much debate between our data elves at the anna.aero galactic headquarters this week, given the fact much of the airline’s growth has come as a result of it assuming flying responsibility on many routes flown last August by Lufthansa. Our rationale is simple. As the new marketing airline uses a different operating code (germanwings, 4U) to the airline it replaced (Lufthansa, LH), we have treated all of these routes as being ‘new’ since the transition process began last year. Right, explanation over, to win this award germanwings has expanded hugely with a net growth of 100 routes in the last 12 months, increasing its network from 161 to 261 routes as of August 2014. Really not that far behind, with a net of 87 routes, Vueling put in a creditable performance to take the runner-up spot.

Airline With Most New Long-Haul Routes 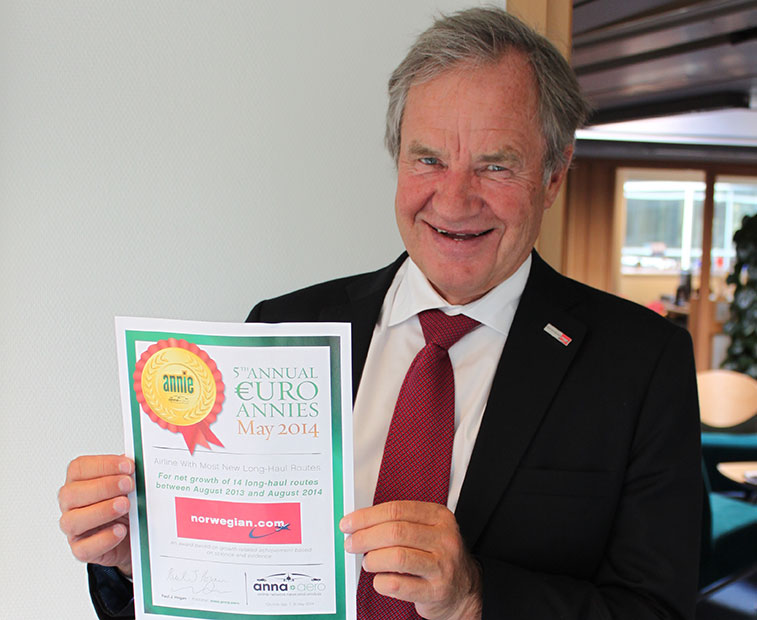 Norwegian’s enigmatic CEO Bjørn Kjos proudly sports his second ANNIE award of 2014, with the latest being the Euro ANNIE for the ‘Airline With Most New Long-Haul Routes’, joining the US ANNIE ‘Biggest New Airline In US Market’ Norwegian won in March.

Airline With Most New European Destinations

Of the 29 new points that will be on the germanwings network map this summer, it is the addition of the likes of Amsterdam, Paris CDG, Oslo, Frankfurt, Milan Linate, Madrid, Bucharest and Warsaw that are perhaps the most interesting. Many of these points are capital cities, and failing that, economic and commercial powerhouses (Amsterdam, Milan Linate and Frankfurt), yet Lufthansa has deemed them unserviceable, presumably as they involve a regional destination at least at one end of the route being transferred. Aegean’s strategy of launching direct routes from its seven regional bases in Thessaloniki, Heraklion, Kalamata, Kos, Rhodes, Corfu and now Chania, has clearly pushed it up the table this year. In addition, it is targeting secondary European cities from its main Athens base to places such as Birmingham, Hamburg and Nantes, which further helps to explain its #2 spot. 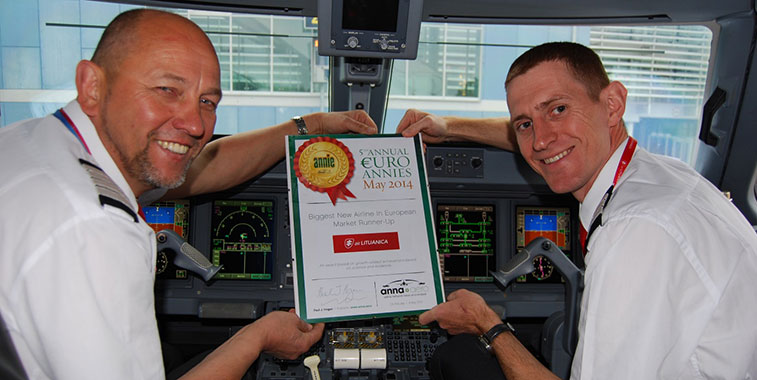 New kids on the block: Captain Jonas Ruzgas (left) and second pilot Adomas Grabskis (right) from Air Lituanica were clearly pleased with the fact that the fledgling Lithuanian airline has won one of its first awards — runner-up in the ‘Biggest New Airline In European Market’ category.

This award goes to the airline with the most scheduled seats operating from European airports in August 2014 that was not operating in, or to, the European region in August 2013. Despite the evident turmoil in Ukraine at the moment, Atlasjet Ukraine, the winner of this category (offering over 27,000 new weekly seats) continues to move towards launch. While domestic and international operations from Kiev Boryspil, Donetsk, Kharkov, Lviv and Odessa were originally planned to start at the beginning of the month, anna.aero understands that the airline has recently received it Ukrainian AOC, so hopefully its launch will go-ahead this summer despite the most trying of operating conditions. With nearly 5,700 weekly seats, in second place was Lithuania’s de facto national carrier Air Lituanica, which narrowly beat Greek start-up Ellinair. The Vilnius-based carrier will be serving ten destinations this August, offering two in Germany (Munich and Berlin Tegel) and Sweden (Gothenburg and Malmo), as well as destinations in the Netherlands (Amsterdam), Czech Republic (Prague), Denmark (Billund), France (Paris CDG), Estonia (Tallinn) and Belgium (Brussels).

For airports, we have six prizes based on total passenger traffic data for 2013 (compared with 2012) in various airport size categories, plus another three awards based on Innovata schedule data for August 2014 (two of which require comparison with the August 2013 data to determine the winner). When determining the number of ‘new’ routes or airlines, we have decided to look at net gains and losses, so that lost routes or airlines are deducted from those gained. When determining whether a route or airline should be included in the data, a minimum requirement was set that the route had to be operated at least weekly (so four times per month) during the peak August month.