On 16 April, Boeing delivered its 8,000th 737 family aircraft to come off the production line to United Airlines, marking another historic milestone. Commenting on the achievement, Beverly Wyse, VP and GM 737 Programme, Boeing, said: “The 737 programme continues to innovate with new features and technology, meeting the needs of our customers now and into the future. Boeing has a long and treasured history with United, and we’re proud they’re taking delivery of this milestone aircraft.”

Following the busiest ever March, both Boeing and Airbus delivered fewer aircraft this April. Besides the fact that Boeing maintains its leading position over Airbus in terms of monthly aircraft delivered in the fourth month of the year, the American manufacturer continues to lead the 2014 delivery race by 24 units (up from 20 in March).

The combined deliveries of both manufacturers for the fourth month of the year, was 108, of which 56 came from the American producer, and 52 from its European counterpart, making it the best April since anna.aero started tracking aircraft deliveries in 2008. Boeing improved its performance when compared to the same month last year, delivering 12 more units, while Airbus handed over six fewer airframes. Overall, 73% of all April deliveries are narrow-body airframes. 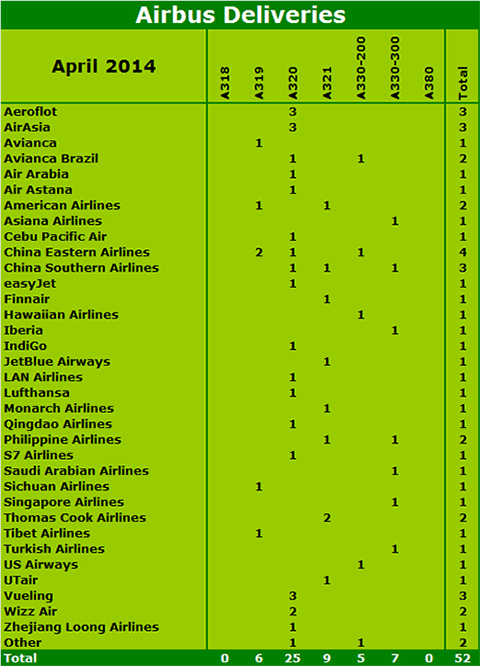 Airbus closed April with a total of 52 units delivered, which constitutes six units fewer than both March’s deliveries, as well as the corresponding month last year. Over the four completed months of 2014, Airbus delivered a total of 193 units, a decrease of 4.5% (-9 units) on the same period of 2013.

Once again, single-aisle deliveries in February were led by the A320 (25 units), with 40 single-aisle jets provided to airlines around the world. The Spanish low-cost carrier, Vueling, was one of four airlines to receive more than two narrow-body units from the European manufacturer, as it incorporated three A320s into its fleet. Other noteworthy carriers to receive three single-aisle units were AirAsia (three A320s), China Eastern Airlines (two A319s and one A320) and Aeroflot (three A320s), while three carriers saw two Airbus narrow-bodies join their respective fleets in April.

A total of 12 wide-bodies were delivered in April, one fewer than in both the preceding month as well as the corresponding month of 2013. Following March’s delivery of four A380s, there were none in April. Furthermore, a total of seven A330-300s were handed over, one each to Asiana Airlines, China Southern Airlines, Iberia, Philippine Airlines, Saudi Arabian Airlines, Singapore Airlines and Turkish Airlines. On 21 April, Aeroflot took delivery of a new A320 fitted with sharklets, which was named in honour of Konstantin Petrovich Feoktistov, a famous Soviet cosmonaut and an eminent space engineer. 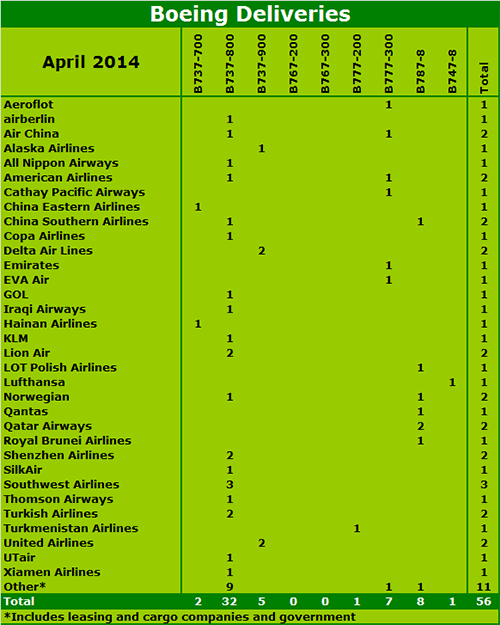 Boeing closed April with a total of 56 units delivered, 10 fewer than in the preceding month, but 12 more than in March last year. The American producer’s total for the first four months of 2014 is 217 aircraft, an impressive 36 units more than in the corresponding period last year (+20%).

A total of 17 wide-body airframes were delivered by the American manufacturer in April 2014, five fewer than in March. However, Boeing significantly bettered its year-on-year performance, delivering 10 more wide-body units than the seven it managed in the corresponding month last year. Following four and nine 787-8s delivered to carriers in February and March respectively, Boeing continued to clear the backlog with a total of eight units of the type reaching customers in April. Qatar Airways incorporated two 787-8s into its fleet, while six other operators took delivery of one unit each. Moreover, a single 747-8s was delivered to Lufthansa during the course of last month. 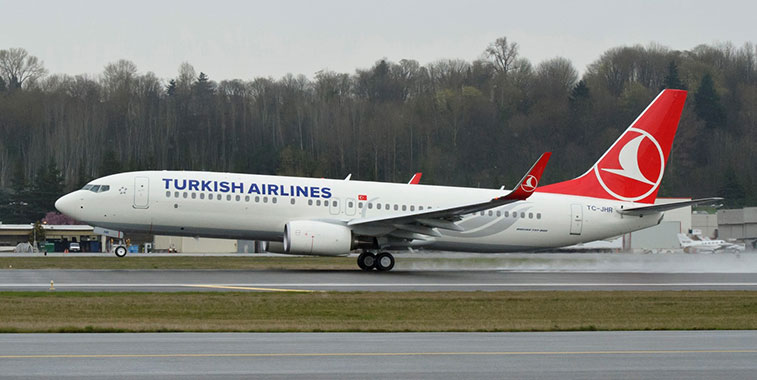 Turkish Airlines took delivery of a new 737-800 aircraft, which arrived at Istanbul Atatürk Airport on 28 April. Commenting on the flag carrier’s latest addition, Ahmet Bolat, Chief Investment and Technology Officer, Turkish, said: “As one of the world’s fastest growing airlines, we are delighted to be taking this meaningful delivery from Boeing. The 75th direct delivery of a Next-Generation 737 aircraft is proving one more time the success of our strong collaboration with our permanent partner, Boeing.”