As part of its 2014 expansion, WestJet has launched daily flights from Fort McMurray to Kelowna and Vancouver on 12 May, which will be operated by WestJet Encore’s Q400s. Marking the achievement are (left to right): Sam Samaddar, Director, Kelowna; and John Weatherill, Director Network and Schedule Planning, WestJet.

Established on 29 February 1996 with three aircraft (that means it technically can only celebrate its birthday once every four years), WestJet is a Canadian low-cost carrier based primarily at Calgary and Toronto Pearson airports. The airline’s fleet of 737 family aircraft has grown rapidly to over 100 units, of which 13 are -600s, 69 are -700s and 23 are -800s. Furthermore, the carrier is the parent company of WestJet Encore ─ which was founded two years ago to serve smaller communities within Canada and now operates 10 Q400s.

The second largest Canadian carrier, according to Innovata schedule data for week commencing 13 May 2014, WestJet handled around 18.5 million passengers last year (a new record high), representing an increase of 6.3% over 2012 figures. However, the great majority of this growth came as a courtesy of its subsidiary that has massively expanded in recent months. In fact WestJet Encore’s July 2014 weekly capacity shows an increase of over 800% (+43,321 seats) when compared to the corresponding month last year. By comparison, the mainline carrier’s weekly capacity grew by just 1.5% (+7,242 seats) over the same timeframe. 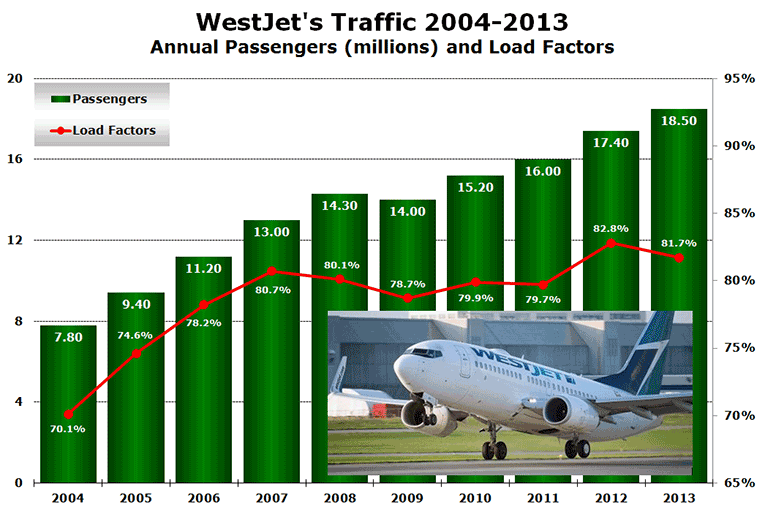 Looking at passenger data between 2004 and 2013, the LCC’s traffic posted a modest decrease of 2.1% in 2009, as a result of the global economy shrinking. With that exception, the carrier has experienced significant growth, achieving a triple-digit increase of 130% in 2013 when compared to 2004 figures.

Having started as an airline intending to serve western Canada (hence the name), the LCC began expanding eastwards in 2000, when Canadian Airlines was absorbed by Air Canada. Examination of its current overall network reveals that it operates over 300 non-stop routes to a total of 79 destinations as of July 2014. According to Innovata schedule data for this summer, Calgary noted almost 13% growth when compared to data from the same period last year, overtaking Pearson and becoming the largest airport in WestJet’s network with an 18% share of weekly flights. 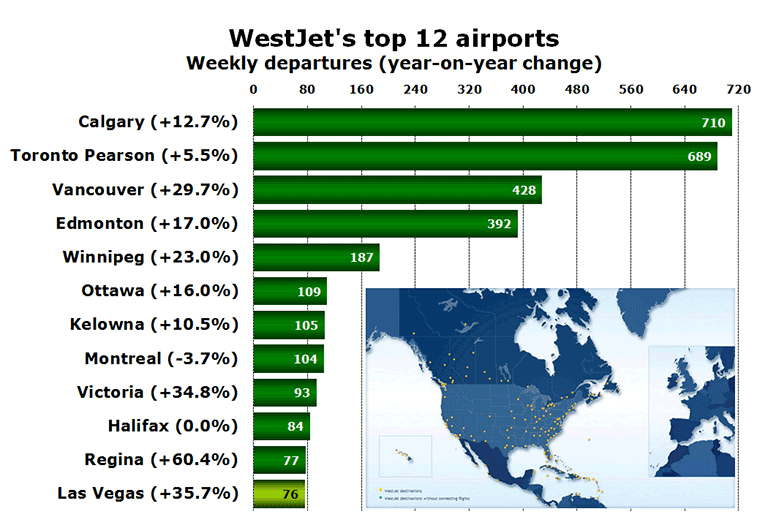 During the summer period, Las Vegas is the carrier’s most frequently served international airport (highlighted in the chart above) with a combined total of 76 weekly flights from 10 Canadian airports. Other noteworthy international airports served with over four daily flights during this period are Los Angeles and New York LaGuardia. As part of its international expansion plan, WestJet has recently announced new seasonal non-stop services from St. John’s to Dublin, starting 15 June and operating until 5 October. Nontheless, as part of the LCC’s international expansion, John Weatherill, Director Network and Schedule Planning, WestJet, commented: “We continue to evaluate the potential opportunity for wide body aircraft.  We are very early in the process, and no decision has been made.”

Analysis of Innovata weekly flights for this July reveals that the LCC is growing at 10 of its top airport bases, with Halifax seeing its operations unchanged. WestJet is expanding hugely at Vancouver, with the airport posting a net increase of 98 weekly flights. This said, WestJet Encore’s triple-digit growth of 480% (+58 flights) is the main catalyst for the Vancouver expansion, while the mainline carrier posted an increase of 13% (+40 flights). In addition, the airport saw the introduction of three new routes in recent months, namely services to Palm Springs, Terrace and Fort McMurray, with the latter having been launched on 12 May along with the Kelowna-Fort McMurray airport pair. In terms of the important factors for evaluating new services, Weatherill added: “We seek opportunities to grow our network to benefit our guests, our people, and our business. We consider many factors: guest feedback, economic growth forecasts, route profitability forecasts, airline codeshare and interline partnerships, corporate strategy, tourism trends and others. To provide sustainable service, new routes in our network must be financially viable, and we partner with airports to deliver low cost air service.”

Calgary-Vancouver is #1 route by seats

Examination of WestJet’s weekly capacity for this summer indicates that the airline’s domestic flights account for a 78% share of seat capacity. Therefore, out of the top 12 airport pairs, 11 are services operated within Canada, with Calgary-Vancouver being 2014’s top route and representing 18% of all weekly seats. On the other hand, the Pearson-LaGuardia service is the only international link in this year’s ranking. 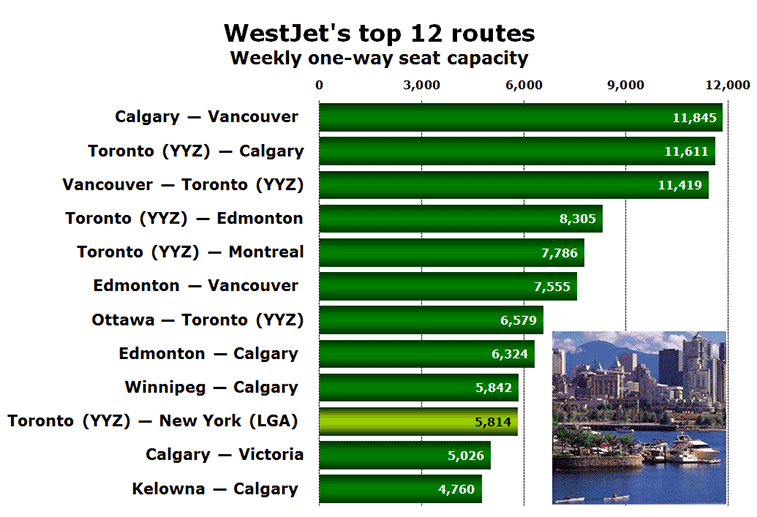 This July, the LCC’s weekly seat capacity experienced 11% growth when compared to data from the same week last year, with seven of the top dozen airport pairs growing. Therefore, the stand out performance is that emanating from the Calgary-Victoria link, which saw 23% growth, while the 573-kilometre sector between Pearson and LaGuardia provided the greatest capacity decrease (-2.6%).