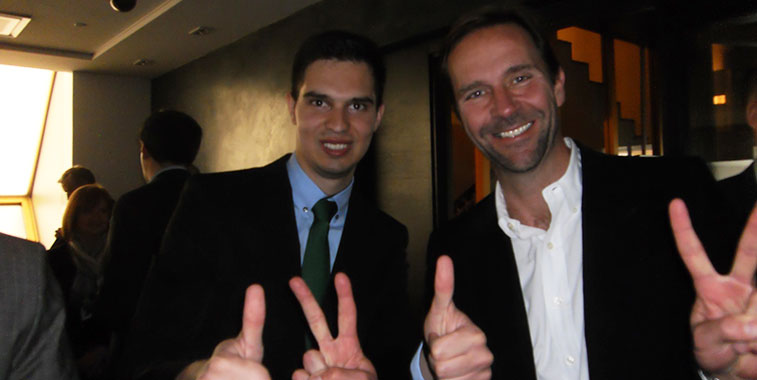 anna.aero’s Vlad Cristescu caught-up with WOW air’s CEO, Skúli Mogensen during Iceland Travel Workshop (ITW) 2014 held in Reykjavik. The LCC had to put its transatlantic plans on hold as a result of not being granted key departure slots at Reykjavik/Keflavik Airport.

anna.aero was invited to Iceland Travel Workshop (ITW) 2014 held in Reykjavik between 15 and 16 May, the first Icelandic conference which aims to connect and introduce the country’s tourism industry to potential partners. A total of 200 delegates attended this year’s conference, giving anna.aero’s Vlad Cristescu a chance to grab a 30-Second Interview with Skúli Mogensen, CEO, WOW air as part of our Iceland special edition grand tour. Read also our Reykjavik/Keflavik Airport profile, Icelandair airline analysis as well as the summary of the ITW 2014.

anna.aero: WOW air currently operates three A320s. Are there any plans to expand the fleet in the near future?

Skúli Mogensen: This summer, we are expecting a new A319 to be incorporated into our fleet. The A320 family supports reduced fuel consumption, lower maintenance costs along with an increased level of reliability, hence we decided to remain faithful to the European manufacturer with regards to our future fleet.

aa: Where are you taking delivery of this A319 from?

SM: The 144-seat A319 will be leased from Atlantic Airways — the flag carrier of the Faroe Islands, and will be utilised to further strengthen our existing European network.

aa: What new network developments are you planning in the next 12-18 months?

SM: We have been seeking to open transatlantic services via our Keflavik hub this summer. Unfortunately, we had to cancel those plans on the basis that we were not granted crucial slots that would have allowed us to connect incoming European traffic to North America. As tourism to Iceland continues to grow at an ever-increasing rate, the demand for routes from North America to our country is greater than ever. We are in position to offer these services and I am hopeful that this issue will be resolved positively sooner or later. That said, we are postponing our transatlantic plans until summer 2015.

aa: According to our recent analysis on WOW air, services to London Gatwick and Copenhagen will record capacity declines. Where are you shifting this capacity?

SM: Services to Gatwick as well as Copenhagen are likely to experience capacity decreases this summer as a result of our plans to consolidate airport pairs to Barcelona, Amsterdam, Paris CDG and Alicante respectively. Unsurprisingly, the UK market is extremely competitive, and after monitoring closely the performance of our Gatwick operations, we decided to manage responsibly our fleet utilisation. However, following the launch of the transatlantic operations, we will significantly expand our presence at the UK gateway.

aa: Stockholm Arlanda, previously scheduled to be launched on 2 June, has been removed from this year’s summer schedule. Why have you reconsidered your position?

SM: Arlanda operations were dependent on our transatlantic project. Following the cancellation of our services to North America this year, we did not have the extra capacity to fly to Arlanda anymore. However, we are definitely looking at opportunities to serve Sweden in 2015.

aa: Analysis of available schedule data for this summer reveals that WOW air will face competition on 10 of its 14 routes from Keflavik, with Icelandair competing directly on seven links. What is it like competing with the flag carrier?

SM: (He laughs)…It certainly involves a lot of fun! We are fully committed and working extremely hard to offer the lowest airfares in the market, deliver excellent on-time performance and enhance the experience of our “guests” (as the airline prefers to call its passengers).