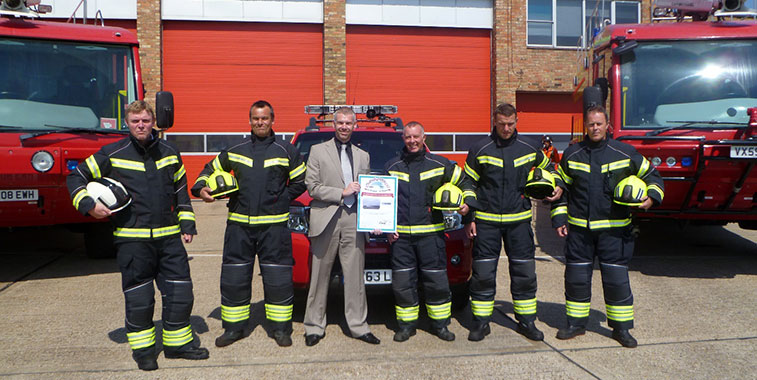 At the end of last year, Tampa Airport achieved back-to-back wins in the inaugural ‘Arch of Triumph’ competition. This week, Cambridge Airport has become only the second airport ever to achieve this monumental feat of airport marketing prowess. That said, I understand that the airport’s fire crew were in intense FTWA training between their two wins to ensure that victory was theirs. However it was a close run thing, with the UK regional airport stealing the win with the last score from the last judge, to push Bakersfield’s FTWA for its Frontier Airlines launch into second place. The inter-regional competition is far more clear-cut, with Europe now storming ahead with nine wins out of 15 so far in 2014. Come on the rest of the world – make a fight of it!!

Etihad Regional Verona to Cambridge 17 May 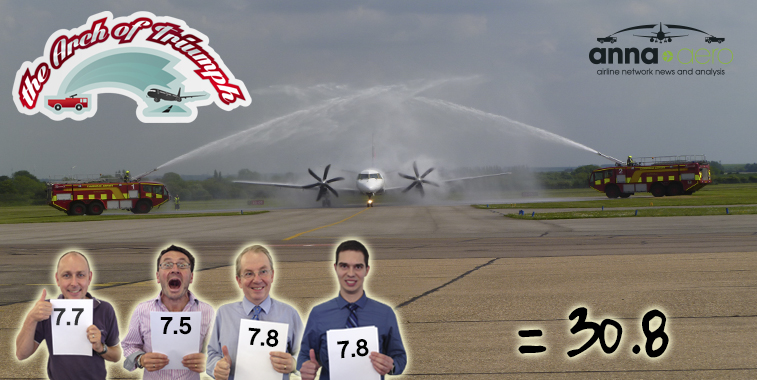 A lovely effort from ‘Green Watch’ at Cambridge Airport. But still a ‘Roman Cross’.

Judge’s comments: Now I know the fire crews at Cambridge have really put the effort in this week to secure back-to-back wins in this illustrious competition, and they think they have produced a pair of ‘Leaping Dolphins’ — but they have not. ‘Leaping Dolphins’ are characterised by arched jets of water meeting perfectly over the aircraft, with no excess water (as a result of too much pressure) being displayed. This is a ‘Roman Cross’ FTWA, which still shows good technique, but will never win the overall ‘Arch of Triumph’.

Icelandair Reykjavik/Keflavik to Vancouver 13 May 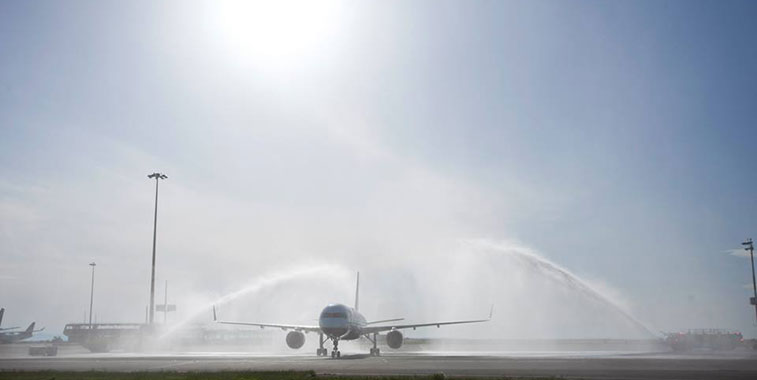 Clearly the bright sunshine in Vancouver dazzled the fire crews into producing this effort. Or is it a blob of ice-cream on the lens?

Judge’s comments: Total whiteout. The placement of the photographer on this one has a lot to answer for. As a result of facing into the sun it’s hard to tell what anything is in the picture…or indeed whether we are at an airport at all. All this before we even get started on the ‘Big boy, Little boy’ provided by the YVR crews. You can tell this is the Canadian airport’s first entry in the competition, as it still has a lot to learn. 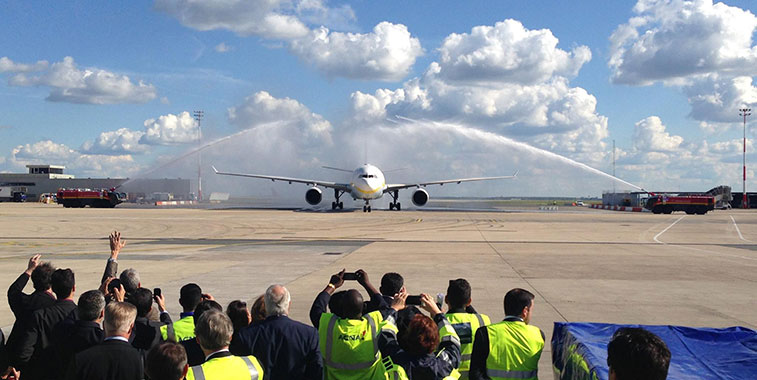 Seconds later this picture could have been close to FTWA perfection. Or is it a ‘Bombay Mix’ style arch?

Judge’s comments: With all those people filming and taking pictures you would have thought that someone might have got a picture 1.8 seconds later when the left-hand monitor’s spray reached full flow and would have created a near perfect pair of ‘Leaping Dolphins’. Unless of course the CDG fire crew were doing homage to a lesser known style of FTWA, known as the ‘Bombay Mix’. I guess we’ll never know. 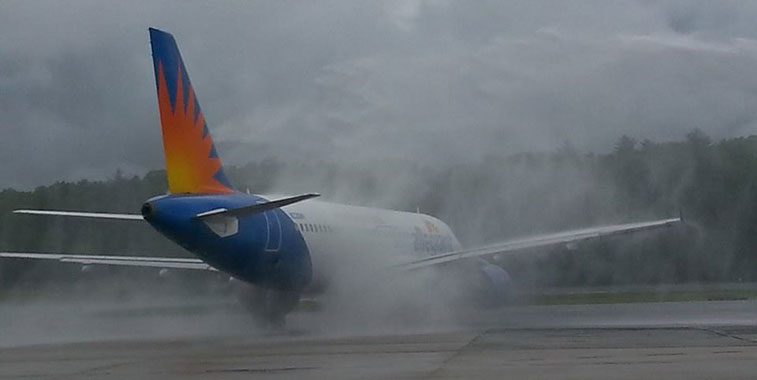 Possibly the worst FTWA ever? Or just an ultra low-cost one?

Judge’s comments: Is this an ultra low-cost FTWA? Maybe, like the Allegiant Air fleet, the fire crews at Ashville sit around for most of the week doing nothing and then spring into action on the three busy days of the week when they have a flight? It would certainly explain this FTWA which has received the lowest score ever awarded.

Qatar Airways Doha to Hofuf 15 May 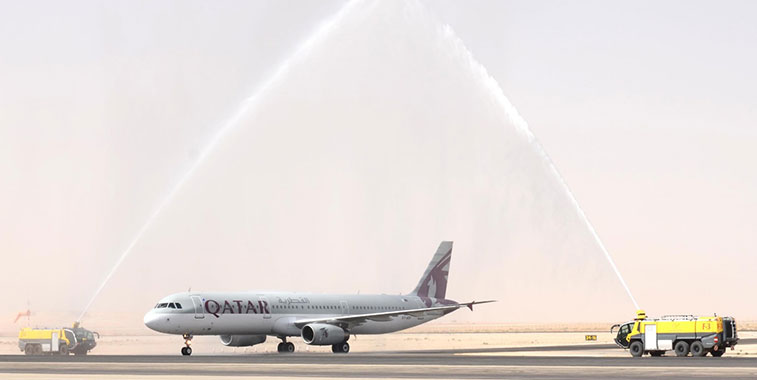 Judge’s comments: Fire station commander: ‘Look guys, whatever you do, don’t get the aircraft wet as we don’t want any drips of water dribbling down the side of the aircraft and hitting Al Baker’s three remaining strands of hair when he gets off the plane.’ Fire crews: ‘Ok boss, we’ll aim high’. Apparently some of the water used in this FTWA is still coming back down to earth.

Frontier Airlines Denver to Bakersfield 16 May 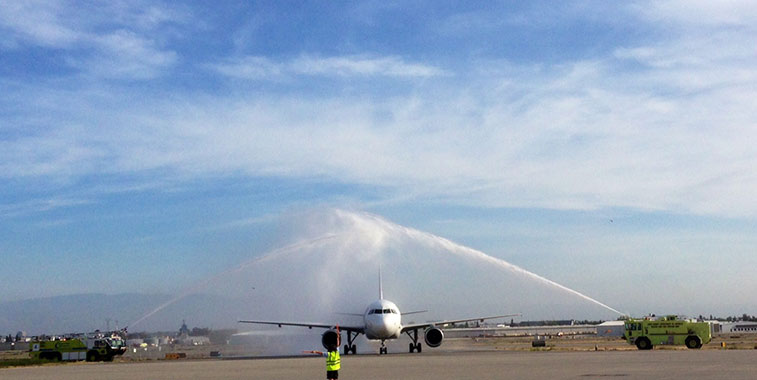 Don’t come this way, the terminal is over there.

Judge’s comments: We love the fact that the two jets of water meet perfectly above the Frontier A319, if only the crew in the right-hand tender had just tweaked the pressure down a notch to produce a more arched display, then this would have a been troubling the top three on the leader board. So close, yet so far.