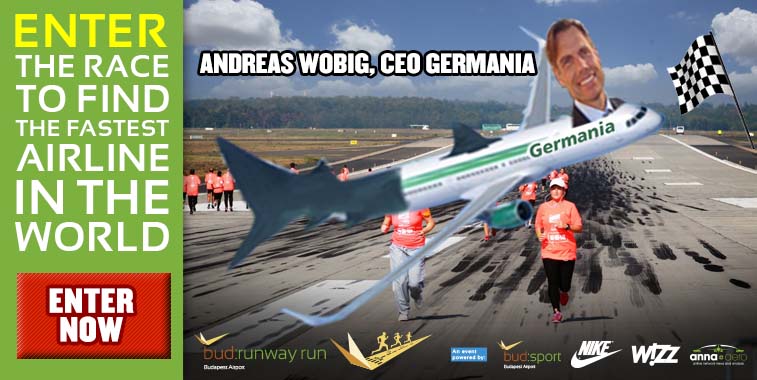 Half marathon-running Andreas Wobig, CEO of Germania, is the latest airline boss to make a bid to win the “Fastest Airline CEO in the World” anna.aero-Budapest Airport Golden Cake Trophy in the bud:runway run, the 12km charity running race taking place on Budapest Airport’s Runway 13R-31L on Saturday 6 September.

The airline leader’s prize is one of a series of anna.aero-Budapest Airport Golden Cake Trophies available for race winners taking part in “bud:runway run”, a totally unique race taking place on the active runway of a major European airport in aid of child cancer charities, and other good causes.

Organised by an expert coalition of race host Budapest Airport, Nike, Wizz Air and anna.aero, the other the top prizes also include the “Fastest Airline in the World” team prize. 100% of entry fees will be donated to the designated charities.

Wobig, who will line up alongside an expanding field of airline CEO’s led by Platinum Sponsor Wizz Air CEO József Váradi, represents a formidable force – alongside “running” Berlin-based Germania, Wobig is a frequent runner who also manages to fit in a half marathon distance each week and regularly competes in races, completing March’s Vattenfall Berlin Half Marathonin 1:48. 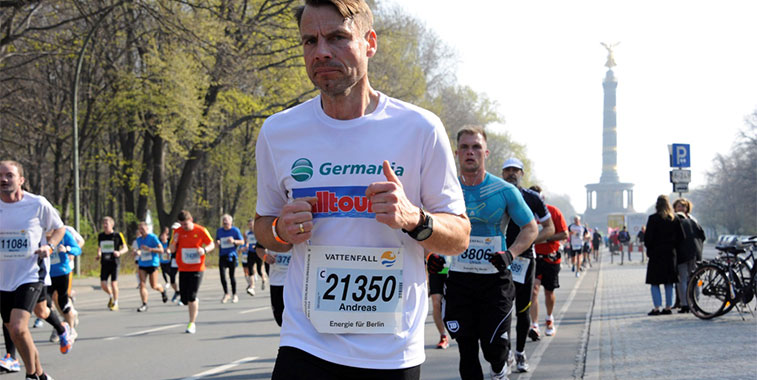 Thumbs up: Andreas Wobig appropriately sails past Berlin’s Siegessäule (Victory Column) to his 1:48 finish in this year’s Berlin Half Marathon. The Germania boss tells us he has the Budapest Runway Run’s “Fastest Airline CEO Golden Cake Prize” firmly in his targets.

The Germania boss will no doubt be expecting that running down the runway at Budapest in bud:runway run will also be good preparation for November’s TÜV Rheinland Berliner Marathon-Relay – a regular “home game” for Berlin-based Team Germania which takes place on the runway of the now-closed Berlin Tempelhof Airport in which Wobig will be joining as a fifth team member for the first time.

“Andreas is excited about coming to Budapest where he will be joined by Germania team mate, Sven Dupke. Besides the team prizes he fully expects to make a competitive bid for the title of Fastest Airline CEO” said Friederike Busch, Executive Board Secretary, when posting the entries.

According to an anna.aero analysis earlier this year the privately-owned carrier grew rapidly in 2013, handling over 1.6 million passengers, 60% more than in 2012, and has embarked on a further huge network expansion with a total of 11 routes being added in the first half of 2014 – all of them faithfully covered by anna.aero: