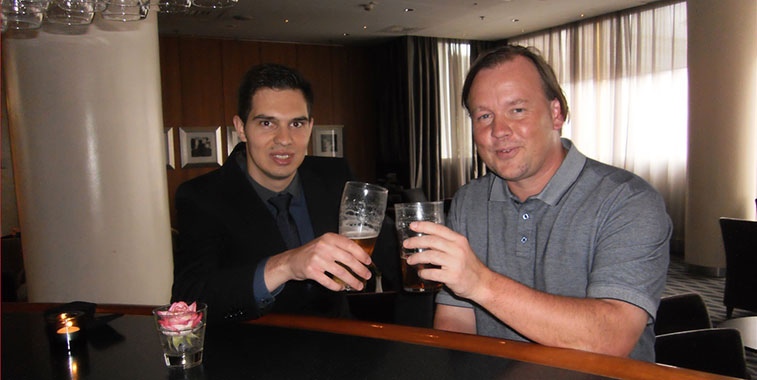 Discussing the recent developments of Icelandair over a cold one during Iceland Travel Workshop 2014 held in Reykjavik last week, are (left to right): anna.aero’s Vlad Cristescu and Kjartan Jónsson, Director Network Planning, Icelandair.

Iceland’s national carrier, Icelandair, launched on 13 May its fifth connection to Canada — Vancouver — with twice-weekly flights from its Reykjavik/Keflavik base. The geographical position of Iceland — midway between Northern Europe and the eastern coast of North America — allows one-stop transatlantic services, which is one pillar of the airline’s business strategy, along with traffic to and from the country. “With a total of 25 and 13 gateways served in Europe and North America respectively, the transatlantic connectivity is a significant aspect of our business model,” stated Kjartan Jónsson, Director Network Planning, Icelandair, during an informal meeting with anna.aero’s Vlad Cristescu at  Iceland Travel Workshop 2014 held in Reykjavik last week.

Operating a fleet of 18 757s, the carrier has been growing impressively in recent years, as analysis of Innovata seat capacity indicates that around 94,000 weakly seats will be offered this July, 37% more since anna.aero last looked at this carrier three years ago. In addition, as part of its future expansion plan, Icelandair has recently signed a commitment for 16 737 MAXs, to be delivered from early 2018. “Taking into consideration the reduced range of the 737 MAX family aircraft, they will likely be flying to the eastern coast of North America, which will facilitate the opening of new markets, namely Ottawa and Montreal. While the new airframes will be used on the short sectors, our current 757-200s will be relocated to longer operations,” said Jónsson with regards to the future aircraft order.

After a period of operational rationalisation due to the 2007-08 local banking collapse along with the eruption of Eyjafjallajökull volcano two years later, Icelandair significantly increased its annual passenger performance over the last three years, handling 2.3 million passengers in 2013 (a new record high), representing an increase of 12% over 2012 figures. In the first four months of 2014, for which data is already available, the carrier posted an increase of 14% when compared to the corresponding period of the previous year, with 600,000 passengers achieved until end-April. If the airline continues on this growth trajectory, it would set a new record of close to 2.6 million passengers in 2014, based on anna.aero’s forecast. 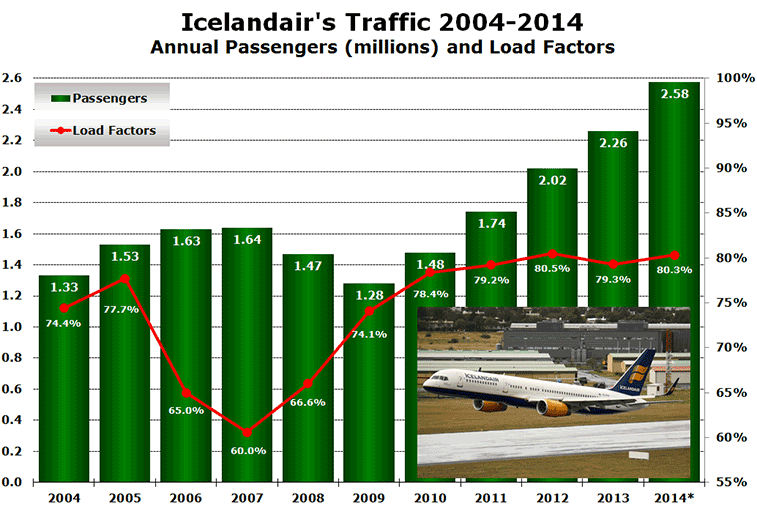 It seems seasonality plays a major role in Icelandair’s operations. Historically, February and July have been respectively the weakest and the strongest months of the year, as a consequence of the increased tourist demand during the summer period. However, analysis of recent traffic figures indicates that this gap has been narrowing in recent years, as the 2011 February low accounted for 31% of the July peak, followed by 33% in 2012 as well as 34% last year. Commenting on the airline’s seasonality, Jónsson, said: “This is driven by the fact that Icelandair operates in a very seasonal market, which has a concentrated tourist season peaking from mid-June to August. I don’t believe this will change very much in the future, considering the profits are being much higher during the summer period.” 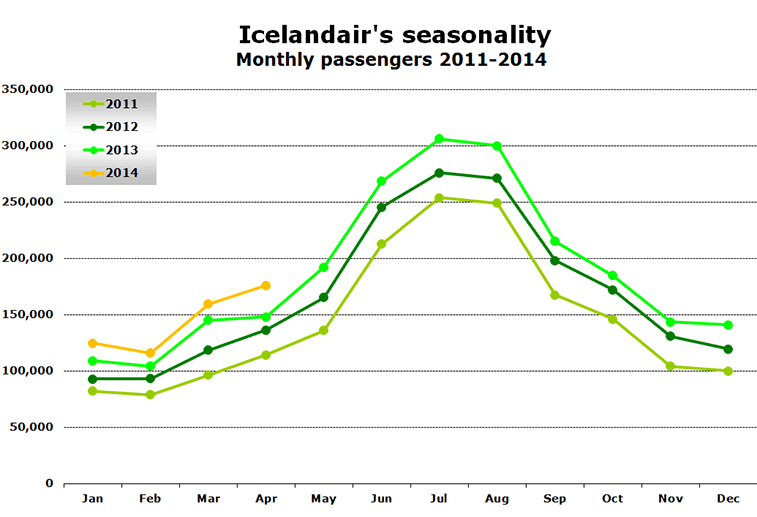 Copenhagen is still #1 destination by seats

According to Innovata schedule data for this July, the carrier operates 38 non-stop services from its Keflavik hub to a total of 15 countries in North America and Europe. In terms of its most significant services, the top 16 routes account for 76% of all weekly seats this summer, representing a 7.7% increase from last year’s figures. Furthermore, with a yearly increase of 3.8%, the 2,150-kilometre airport pair to Copenhagen still accounts for the majority of weekly seats (10%) in 2014, being operated with a total of 26 weekly flights from Keflavik.

Moreover, highlighting the airline’s operating strategy of feeding European traffic to North America, seven of the top 16 routes are services operated to either the USA or Canada (highlighted in the chart below). “Throughout 2013, around 45% of Icelandair’s traffic was connecting between the USA and Europe via our Keflavik hub. With that exception, around 15% of traffic was classified as outbound traffic from Iceland, while the remaining 40% of demand was originating outside the country,” confessed Jónsson. 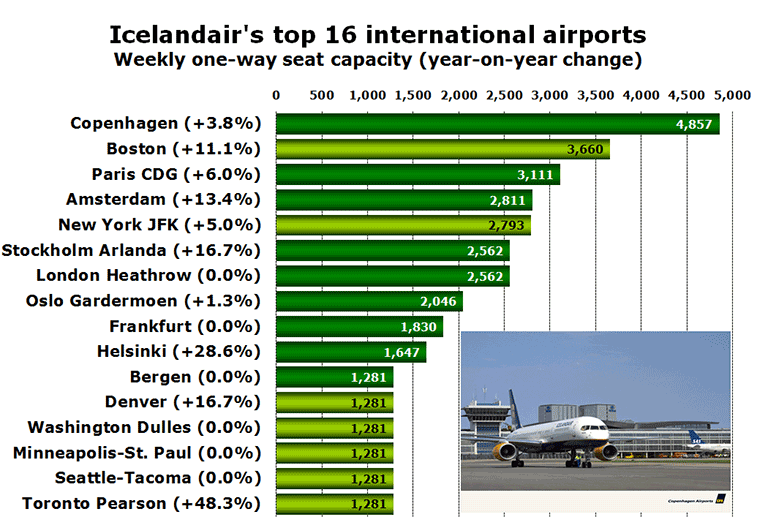 Icelandair’s weekly seat capacity posted 16% growth this July, when compared to data from the corresponding week last year, with 10 of the top 16 routes growing, while the remainder saw their operations unchanged. That said, the stand out performance is that emanating from the 4,181-kilometre sector to Toronto Pearson which grew by 48% (+417 seats) over last year. Commenting on the overall growth over the airline’s network for S14, Jónsson, said: “This summer’s growth comes as a consequence of Icelandair incorporating three additional 757-200s into its fleet. While one aircraft is being acquired from American Airlines, the remaining two will be taken back from Yakutia, after having been leased to the Russian carrier for the past years.” As part of its network expansion, Icelandair commenced its fifth connection to Canada, with twice-weekly seasonal flights from its Reykjavik/Keflavik hub to Vancouver. The new airport pair will be operated utilising the flag carrier’s 757-200s until 12 October.