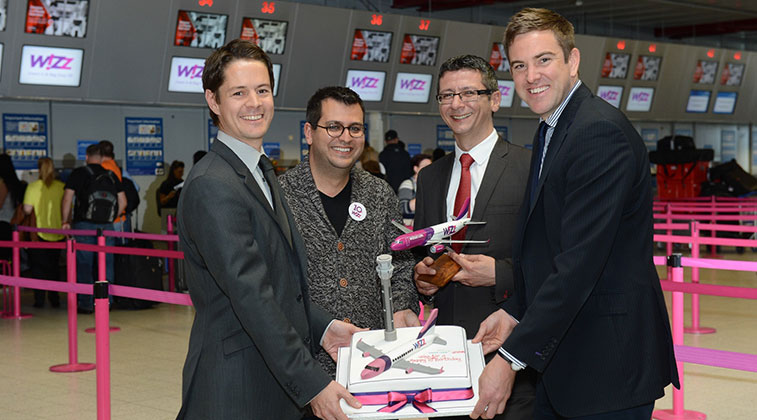 On 19 May 2004 Wizz Air launched its first ever flights from Katowice Airport in Poland to Berlin Schönefeld, London Luton, Milan Bergamo and Rome Ciampino. Some things have remained unchanged in the subsequent 10 years; including the airline’s choice of 180-seat A320s to operate all flights, the distinctive pink and purple branding and aircraft paint scheme, and Jόzsef Váradi as CEO. According to data from Airbus, the airline’s fleet now comprises 48 A320s with a further 86 A320s on order, as well as 26 larger A321s.

Since the airline’s launch in the summer of 2004, schedule data shows that it has grown each year, though growth rates have declined as would be expected as the airline gets larger. However, the airline’s year-on-year capacity growth for this August (of almost 19%), is its fastest rate of growth since 2010. According to the airline’s own PR, it has carried 69 million passengers in its first decade. 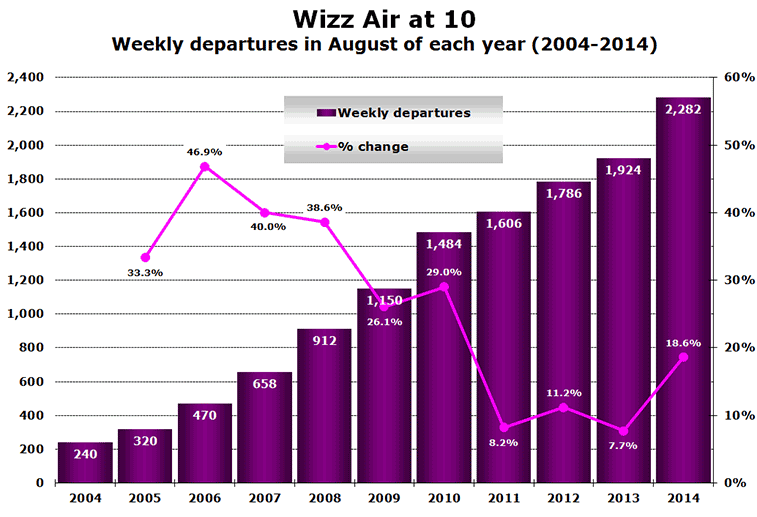 Wizz Air and its sister airline Wizz Air Ukraine, now operate from 17 bases across Central and Eastern Europe. These are split across nine countries. At the end of 2013, additional bases were announced for 2014 in Lviv (Ukraine), Craiova (Romania) and Riga (Latvia). Due to the situation in Ukraine, the Lviv base appears to have been postponed, though the airline continues to operate some flights to the airport. The Donetsk base (which opened last October) has now been reduced to a single, bookable route to Kutaisi in Georgia. The Riga base (one aircraft, four new routes) is scheduled to open in June, while the Craiova base (one aircraft, four new routes) will commence operations in July.

London Luton is still busiest airport (but not a base!)

Analysis of the airline’s summer schedule confirms that London Luton Airport remains the airline’s busiest airport in terms of weekly departures, with 230 spread across 27 destinations, an increase of over 30% on last summer. Other non-base airports (shown in pink) that rank among the airline’s top 16 airports are Barcelona (Spain), Dortmund (Germany), Eindhoven (Netherlands), Milan Bergamo (Italy) and Paris Beauvais (France), highlighting the pan-European nature of the airline’s network. 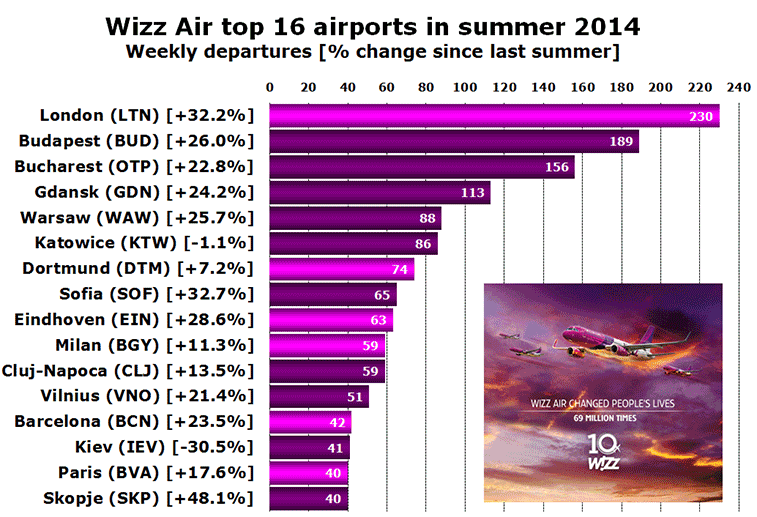 A total of 95 airports will welcome Wizz Air flights this summer, up from 90 last summer. Since last summer, Antalya in Turkey has been dropped from the airline’s network, but Basel (Switzerland), Chisinau (Moldova), Dubai Al Maktoum (UAE), Kosice (Slovakia), Moscow Vnukovo (Russia), and Sibiu (Romania) have been added.

The airline’s route network will this summer comprise 296 routes, up from 269 in August 2013. The net gain of 27 routes comprises 49 new routes and 22 dropped routes. Of the dropped routes, 20 involve operations from designated bases and they are summarised in the following table. The two remaining dropped routes are between Kharkiv (Ukraine) and Kutaisi (Georgia), and between Debrecan (Hungary) and Dortmund (DTM).

Since the summer of 2009, Wizz Air’s average weekly frequency, across its route network in summer, has consistently been below four flights per week. This summer is no exception. However, like Ryanair, Wizz Air’s average weekly frequency has risen slightly from 3.58 in August 2013, to 3.85 in August 2014. Only 42 of the airline’s 296 routes operate at least daily, and just eight operate with at least two daily flights. The airline’s busiest routes are Luton to Budapest (26 weekly departures), Luton to Bucharest (21 weekly flights) and Luton to Warsaw (20 weekly flights).

What the CEO said

Wizz Air’s CEO Jόzsef Váradi, said: “I am very proud to reach such an important milestone. We have reached this important day following 10 years of hard work by an outstanding team of professionals. Our last 10 years have seen rapid growth, constant innovation, giving our customers the freedom to travel and pursue new experiences and opportunities. As Wizz Air, and its dedicated staff, enters our next decade we will continue to challenge competitors and offer low fares and great customer service. Today I would like to thank all of our customers for their loyalty and for being part of Wizz Air’s incredible journey.”