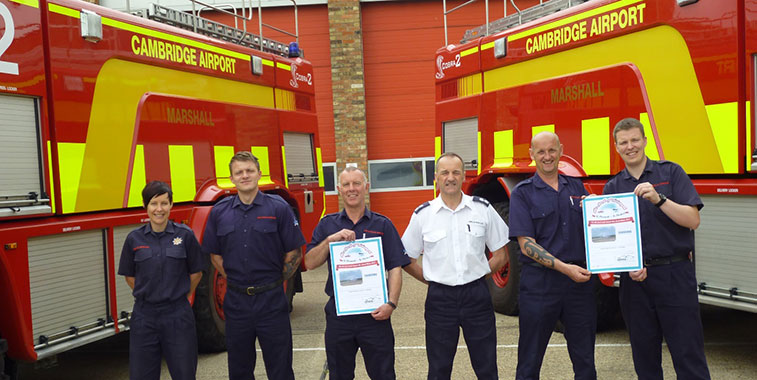 The standard of global FTWA’s is improving – and it’s all down to anna.aero. In 14 weeks of competition last year, the average score from the four anna.aero expert judges was 5.7. In week 16 of the 2014 competition we are already seeing a 0.4 improvement in the average — up to 6.1. We are in no doubt that these higher scores are being achieved because of the increased focus and attention to detail being taken by airport marketing and firefighting departments. Airports want to win our weekly ‘Arch of Triumph’ certificates to add to their trophy cabinets and firefighters are taking it upon themselves to undertake extra training in order to deliver the goods. This week’s winner, Istanbul Sabiha Gökçen, has jumped straight into fifth position – giving Europe eight out of 10 of the leader board positions. Keep monitoring! 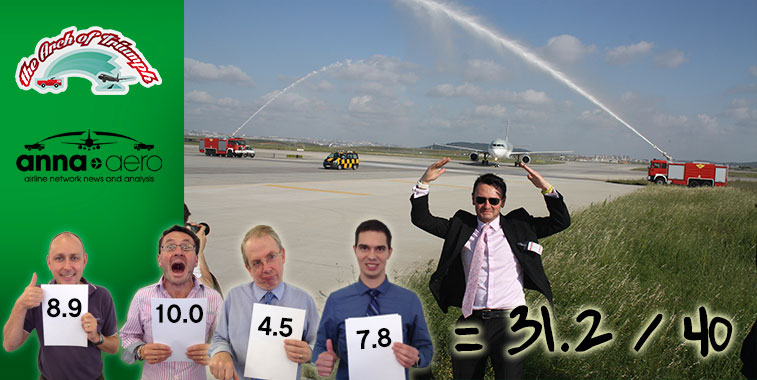 anna.aero’s publisher, Paul Hogan, was specially invited along for the arrival of Qatar Airways’ first service and to witness the world premiere performance of the “Sabiha Gökçen Half Cuban 8” FTWA. See special On-Location Report for this important launch.

Judge’s comments: The “Sabiha Gökçen Half Cuban 8” — a classic manoeuvre you’ve probably seen at air shows, and here re-created here as a FTWA by the firefighters of Istanbul Sabiha Gökçen Airport (which is named after the world’s first female fighter pilot and adopted daughter of Kemal Atatürk). While Ms Gökçen was well known for her combat role — fighter pilots have used variations on the Half Cuban 8 since the early days of dogfighting — in peacetime she was also a talented aerobatic pilot who loved to perform this stunt for adoring crowds.

Interjet Mexico City to Leon/Guanajuato 22 May 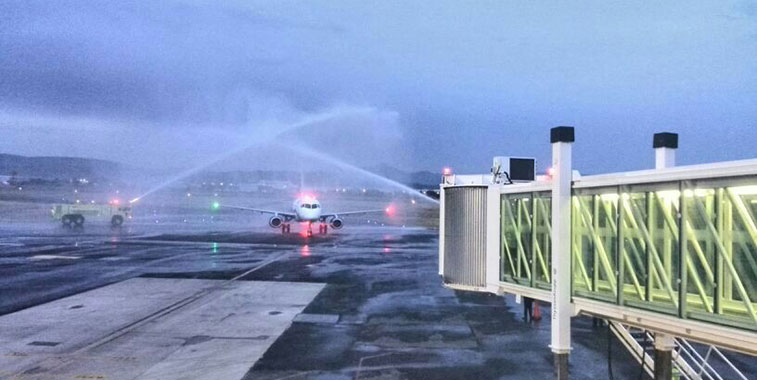 Judge’s comments: In order to save money on route launch marketing costs, Mexico’s Leon/Guanajuato Airport has come up with this ingenious gadget. The water jet firing air bridge. Unfortunately it still requires some work before it creates a perfect pair of ‘Leaping Dolphins’. 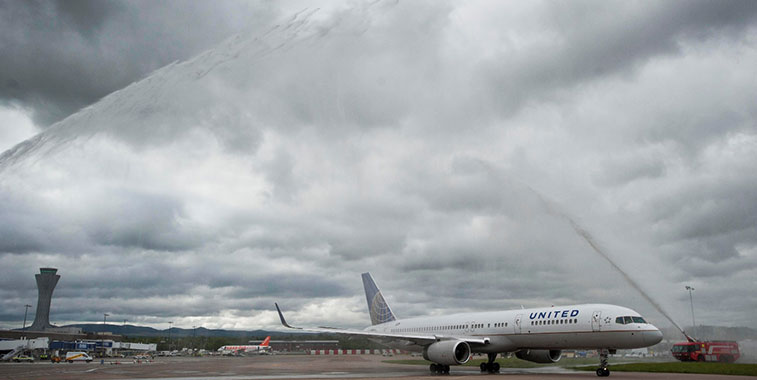 Grey skies for a grey FTWA.

Judge’s comments: A bit like buses on Princes Street in downtown Edinburgh, you wait ages for one and then two turn up at the same time. The same seems to have happened at Edinburgh Airport, we go months with no FTWA entries from Scotland’s capital city airport and then we get two at once. That said, its initial offering is decidedly average…maybe they will do better tomorrow?

US Airways Philadelphia to Edinburgh 23 May 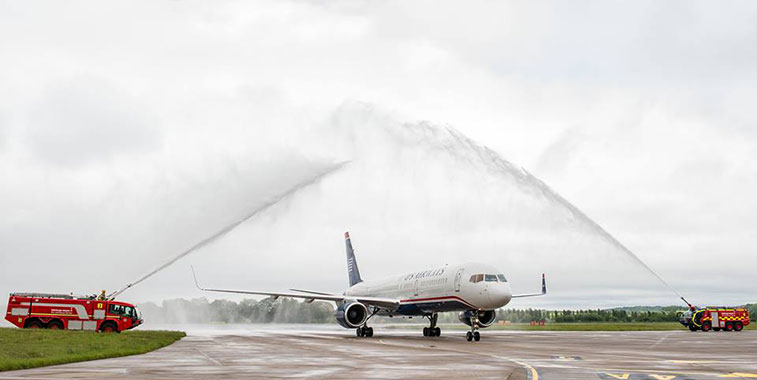 What a difference a day makes. A much better FTWA.

Judge’s comments: The question about this FTWA is…was it the same watch on duty that had performed the FTWA for the United Airlines launch the day before? If yes, then a valuable new route marketing lesson had clearly been learnt. If no, then the firefighters on Friday’s day shift clearly need some more time on the training ground!! Time to fess-up Edinburgh Airport.

Icelandair Reykjavik/Keflavik to Geneva 24 May 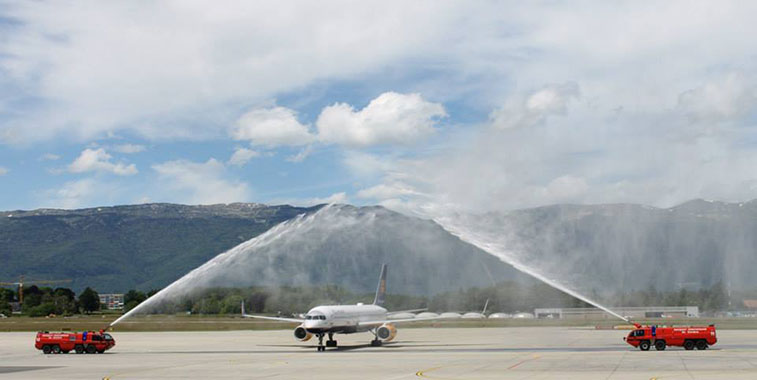 Judge’s comments: The firefighters at Geneva Airport are spoilt for choice when deciding what style of FTWA to go for. They could have elected to go with the more common ‘Tobleroning’ arch which has spread worldwide. Instead they have gone for the less well-known ‘Lake Geneva Fountain’ example. As you would expect its perfectly executed on home soil, but in a global competition only a pair of ‘Leaping Dolphins’ will attract the highest scores.

KLM Amsterdam to Zagreb 26 May 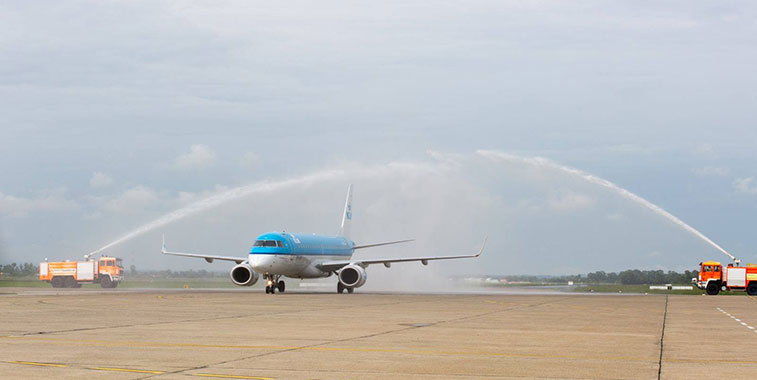 Losing out by 0.1 is harsh for Zagreb.

Judge’s comments: In a less competitive week (or one when anna.aero’s boss isn’t in the picture) this FTWA at Zagreb would have walked away with the weekly ‘Arch of Triumph’ prize. Losing by such a small margin will undoubtedly increase airport marketing resilience at the Croatian airport, a character-building service that anna.aero does not charge for.