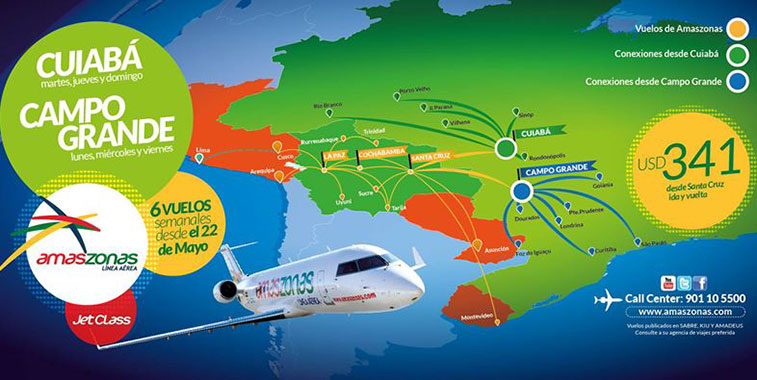 Amaszonas, the second largest carrier in Bolivia, serves a total of eight destinations in the country, as of May 2014. In fact, on 22 May, the operator launched a new international service from its Santa Cruz hub to Cuiaba in Brazil with thrice-weekly flights, using its CRJ 200s.

Covering an area of 1.1 million square kilometres (around twice the size of Spain), Bolivia is a landlocked country in South America, being rich in mineral and energy resources. Inhabited by over 10 million people, the country features a population density similar to that of Russia at just over nine people per square kilometre. According to IATA, the country’s GDP growth has accelerated since 2001, boosted by high gas and other commodity prices, government spending and by large inflows of remittances from emigrant workers elsewhere in South America and Europe. The aviation industry has played a significant role in supporting economic growth as well, due to Bolivia being relatively isolated from the major global markets around the world. The country’s three biggest gateways (in terms of annual seat capacity) are Santa Cruz, La Paz and Cochabamba airports, which have increased their combined annual seat capacity by 42% since anna.aero last looked at this country market five years ago.

Examination of Innovata annual capacity reveals that around 4.4 million one-way seats were offered on services involving Bolivian airports in 2013, representing an impressive increase of 27% over the previous year. That said, all three of the biggest airports managed to post capacity increases when compared to 2012 figures, with Santa Cruz — also known as Viru Viru International Airport — recording the largest growth (35%), followed by La Paz (30%) and Cochabamba (26%). In fact, these top three airports accounted for around 81% of all seats last year. 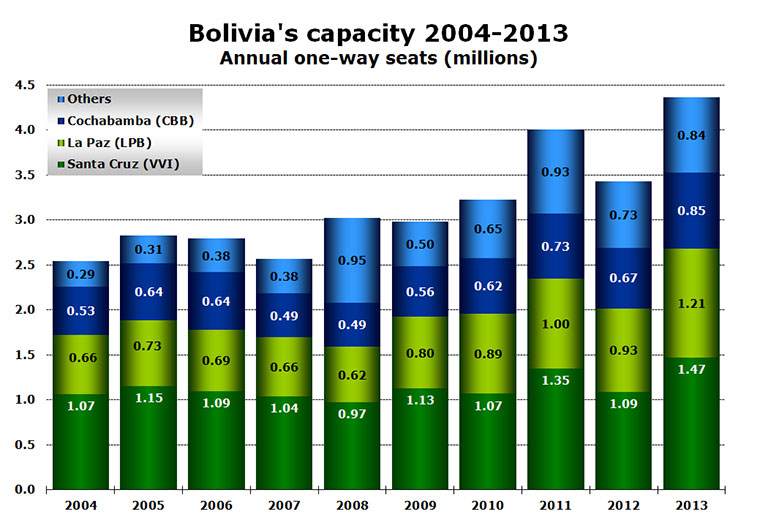 Overall, looking at the annual seat figures since 2004, the combined capacity of Bolivian airports noted almost 72% growth in 2013. Not surprisingly considering the country’s political and economic instability in recent years, these airports saw an uneven development during this timeframe.

BoA bosses Bolivia with 50% of seats

As of May 2014, Bolivia is served by a total of 13 carriers, with Boliviana de Aviacion (BoA), the state-owned national flag carrier, being the dominant player in this country market, as it commands over half of weekly seats. The airline operates a total of 16 airport pairs, of which three are international routes. That said, Buenos Aires Ezeiza is BoA’s most frequently served international destination with a total of nine weekly flights from Santa Cruz, while the other two are Sao Paulo Guarulhos (daily) and Madrid (thrice-weekly). Furthermore, the flag carrier has a 63% share of weekly seats in the Bolivian domestic market, on which it directly competes with Amaszonas and Ecojet, with the former having commenced thrice-weekly flights from Santa Cruz to Cuiaba during the course of last week. 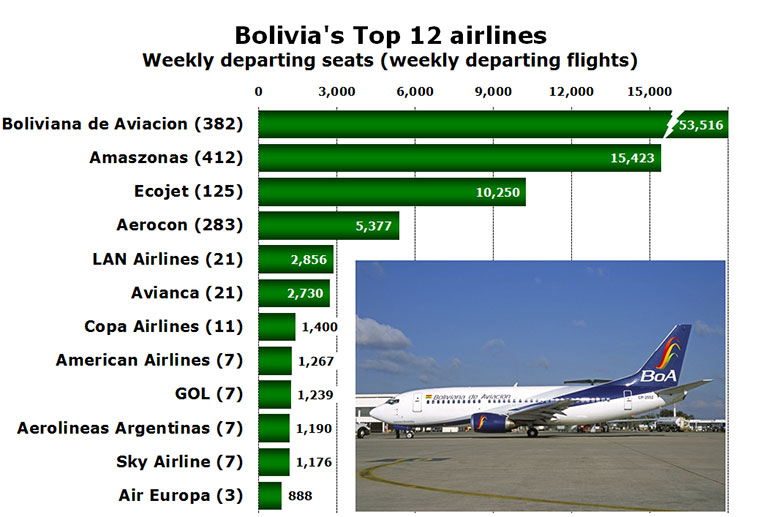 Total weekly seat capacity in Bolivia has gone up 20%, with six out of the 13 carriers recording growth, when comparing data from this May with the same week last year, while four airlines saw their operations unchanged. BoA is not only the biggest airline, but also the fastest growing one, with a net increase of 4,526 weekly seats or 9.2% over the last 12 months. By comparison, GOL, the Brazilian low-cost carrier, noted the greatest capacity decline (-39%), due to reducing its frequency on the 1,851-kilometre Guarulhos-Santa Cruz airport pair from 11 times weekly to daily.

While the domestic sector is Bolivia’s biggest country market representing almost 83% of all weekly seats, nine countries can be reached non-stop from Bolivian airports according to Innovata schedule data for this May. At around 4,200 weekly seats and 6.5% more than in the corresponding month last year, neighbouring Peru tops the list of foreign countries served, with a combined total of 37 weekly flights operated by Amaszonas, Avianca and LAN Airlines from La Paz and Santa Cruz. 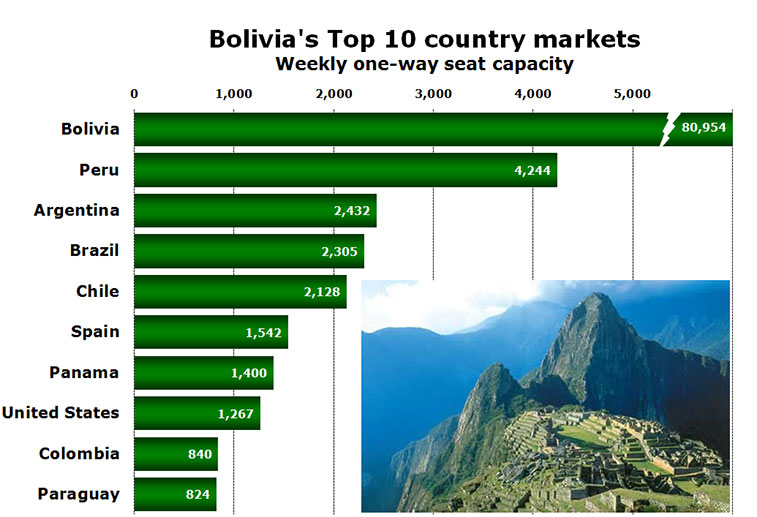 With the exception of the domestic market that has posted a net growth of over 16,500 weekly seats in the past 12 months, Spain and Paraguay have shown the most significant increases, 35% and 32% respectively. As part of its rapid expansion over the last year, Amaszonas commenced four weekly flights from Santa Cruz to Asuncion in Paraguay on 20 November. Unsurprisingly considering GOL’s frequency decrease to Guarulhos, operations to Brazil posted a decline of around 23% (-674 seats) in weekly capacity.