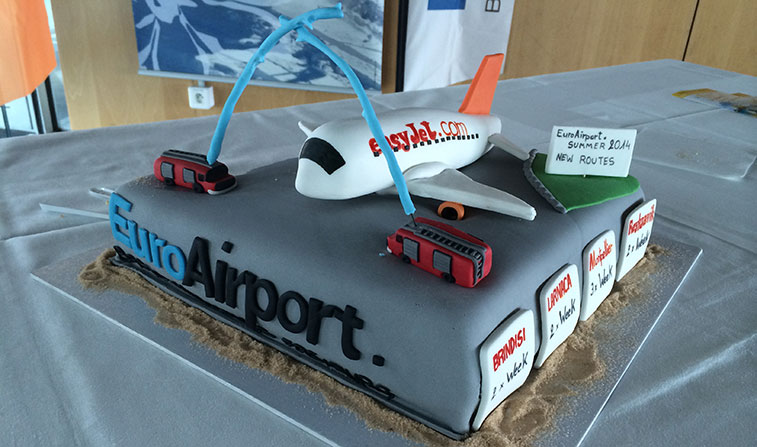 easyJet has been EuroAirport’s leading airline for several years now, and continues to expand its route network from the Swiss-French airport. New routes for S14 celebrated with this awesome cake were the airline’s new services to Brindisi (Italy), Larnaca (Cyprus), Montpellier (France) and Reykjavik (Iceland).

EuroAirport Basel-Mulhouse-Freiburg, more easily referred to as Basel Airport has been one of the fastest-growing regional airports in Western Europe in recent years. Between 2010 and 2013 passenger numbers have soared by 42% from 4.1 million to almost 5.9 million, with the airport well on track to pass the six-million mark this year. During the 1990s the airport grew rapidly thanks to Swiss regional carrier Crossair. However, following the dramatic collapse of Swissair in 2001, the ‘new’ Swiss International Air Lines was created by Crossair, which had acquired the failed airline’s assets. As a consequence, the Basel operations were scaled down and the focus was on rebuilding the Zurich hub. 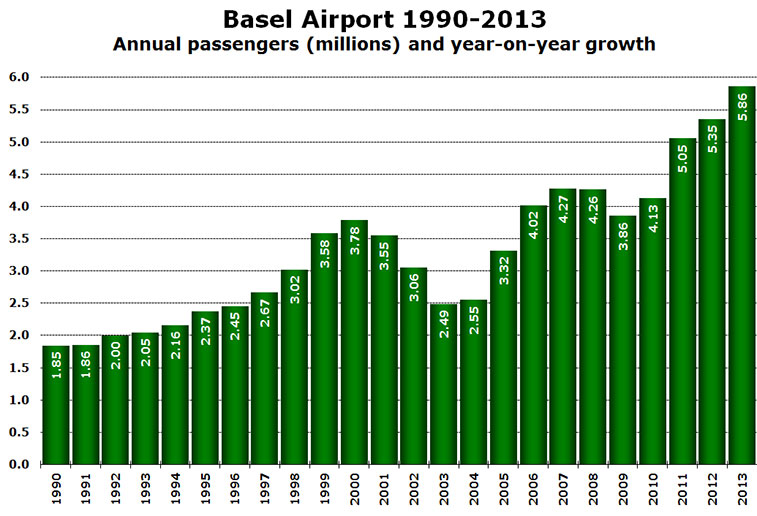 Analysing Basel’s Seasonal Variation in Demand (SVID) score reveals that the airport scores a “good” 4.18, though this is still slightly behind the scores of Zurich (2.12, “good”) and Geneva (1.17, “excellent”). Traffic peaks in July and August, with January and February the least busy months of the year. So far, in the first three months of 2014, passenger numbers are up 4.2%. 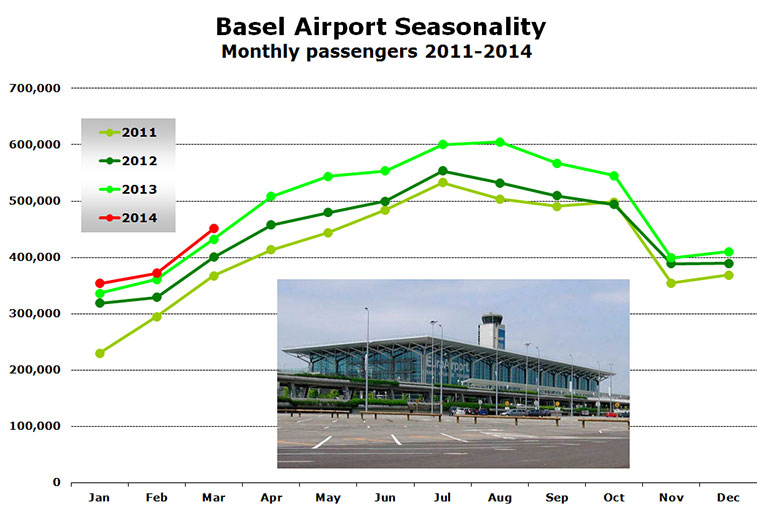 In June 2005, easyJet made Basel its second Swiss base (after Geneva) and since then it has gradually increased its network from just 19 destinations in the summer of 2009, to 46 this summer. New destinations for this summer are Bastia (France), Brindisi (Italy), Larnaca (Cyprus), Montpellier (France), Mykonos (Greece) and Reykjavik/Keflavik (Iceland). Destinations not served this summer are Düsseldorf (suspended 28 March 2014) and Istanbul Sabiha Gökçen (suspended 12 January 2014). The Düsseldorf service recently saw germanwings replace Lufthansa on the route which may have been a factor in easyJet’s decision to withdraw from the market. easyJet now accounts for almost 50% of all scheduled seat capacity at the airport. 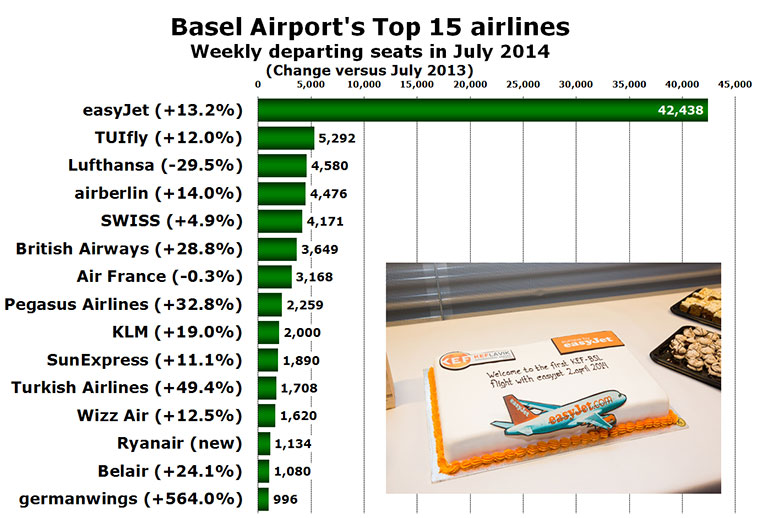 SWISS, which ranks only fifth at the airport, is launching new seasonal services this summer to Ibiza, Olbia and Palma de Mallorca, all markets that easyJet serves. SWISS also competes head-to-head with easyJet on Barcelona and Hamburg, and indirectly on routes to London thanks to its twice-daily flights to London City.

TUIfly and airberlin both operate purely leisure routes to southern European destinations, at relatively low frequencies (with the notable exception of Palma de Mallorca). Lufthansa now only serves its Frankfurt and Munich hubs, with Düsseldorf services transferred to its lower-cost subsidiary germanwings. Wizz Air, which offers low-cost flights to Belgrade, Skopje and Tuzla, is adding twice-weekly flights to Cluj-Napoca in Romania starting in late July.

Ryanair first served Basel in late 2007 and during the next two years offered flights at one time or another to Alicante, Cagliari, Dublin, Girona, London Stansted, Marseille, Porto, Stockholm Skavsta and Valencia. Then in early December 2009 it suspended all routes from the airport. In April of this year it returned with two routes (Dublin and Stansted), and so far the airline has not announced any plans to add further destinations.