anna.aero’s publisher, Paul Hogan, was specially invited along for the arrival of Qatar Airways’ first service and to witness the world premiere performance of the “Sabiha Gökçen Half Cuban 8” Fire Truck Water Arch, inspired by the aerobatic displays once performed by the female fighter ace after which the airport is named.

Qatar Airways’ arrival from Doha to Istanbul Sabiha Gökçen last week – the first touchdown at the airport by a MEB3/Middle East Big 3 airline (and a oneworld carrier) – is the latest big development to further erode the image that Sabiha is a low-cost airport. Indeed the ‘low cost legacy’ has been changing for some time – last year Turkish Airlines arrived with a big chunk of Star Alliance full service and now has 28 aircraft based there, building a mini-hub serving domestic, European and Middle East destinations. Chatting to anna.aero at the launch, Qatar Airways CCO, Marwan Koleilat, made no secret of the fact that the airline sees Sabiha Gökçen as another great chance to feed Doha: “Turkish Airlines is drawing in feed from many airports across Europe and Africa, but this new route gives Qatar Airways access to Sabiha Gökçen’s own important catchment areas on Istanbul’s Asian side, and its reach to many other industrial Turkish cities. Overall this airport serves as as a vital connecting hub between Asia and Europe, so we’ll increase the frequency and size of the aircraft as soon as possible.” (Currently the service is four times weekly using 144-seat A320s.)

To demonstrate Koleilat’s point about connections to over 100 destinations over Doha, Qatar Airways’ marketing people unfurled a banner promoting Istanbul Sabiha Gökçen to the Maldives via Doha. Qatar Airways’ CCO, Marwan Koleilat talks to anna.aero and makes no secret of the fact that the airline sees Sabiha Gökçen as another great chance to feed Doha. “This airport serves as a vital connecting hub between Asia and Europe; we’ll increase the frequency and size of the aircraft as soon as possible.” To demonstrate Koleilat’s point, Qatar Airways unfurled a banner promoting Istanbul Sabiha Gökçen to the Maldives via Doha. The cake is cut, and then tasted by Asiyat Khasanova, Commercial Aviation Director, Sabiha Gökçen and anna.aero’s publisher, Paul Hogan: “In addition to the icing it was very fruity, creamy and spongy – that’s a lot of influences in one cake” concluded the slightly critical publisher after finishing three portions and moving on to share Ms Khasanova’s. 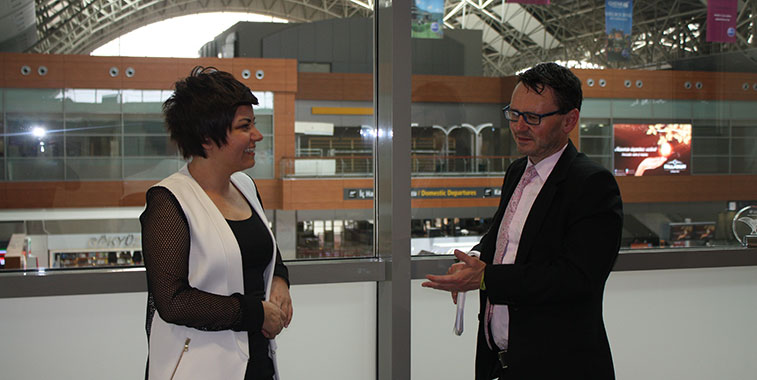 “This has been a full-service airport from the very beginning” Asiyat Khasanova, Sabiha Gökçen Commercial Aviation Director told anna.aero. “We want to attract more full service carriers from both Europe and long-haul destinations and, of course, we want the other MEB3s. International traffic grew by some 50% in Q1 and Sabiha Gökçen is building the capacity which will allow us to grow to 25 million and then 50 million.” 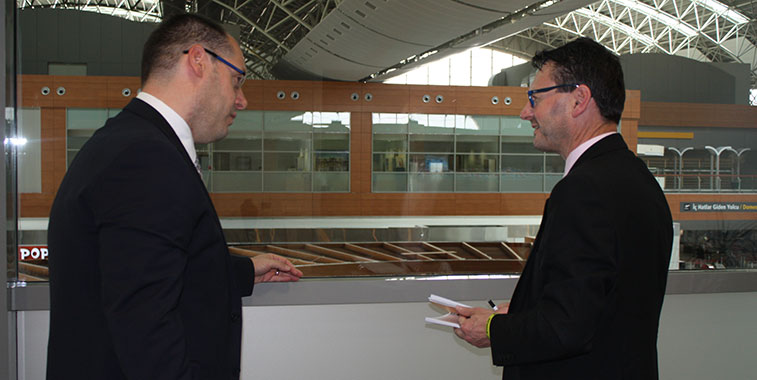 In a separate briefing to anna.aero, Sabiha Gökçen’s COO, Berk Albayrak, explained that construction of the second runway would begin this summer for delivery in the second-half 2016.”We need the runway because our peak times are now filling up, a satellite terminal is also in our plan and will be needed at the same time as the opening of the new runway.”