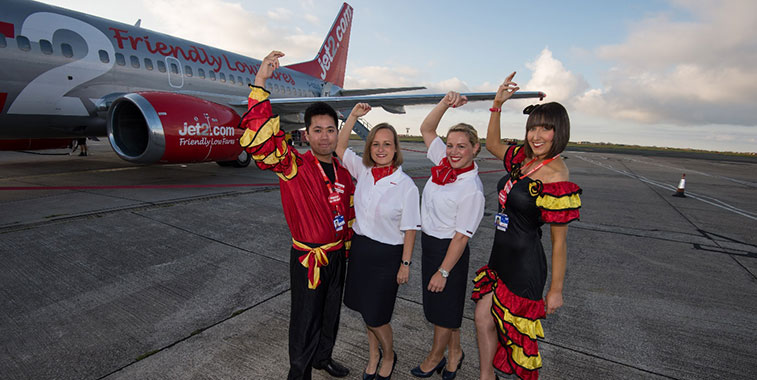 Local Jet2.com staff at Blackpool Airport, Daniel Lio (left) and Antonia Schools (right), donned flamenco outfits to give a fantastic send off to the 145 passengers (98% load factor) travelling on the inaugural flight to Menorca, and treated them to a touch of impromptu flamenco dancing! All passengers on Jet2.com’s new weekly link from Edinburgh to Pula were pleasantly surprised with a welcome reception, home made cakes and plenty of good Istrian wine on offer to welcome their arrival in Croatia. Upon arrival at Funchal on the Portuguese island of Madeira, Jet2.com’s passengers coming in on the inaugural weekly flight from Glasgow on 26 May were welcomed with fresh gerberas (flowers) and Madeira wine. 154 passengers were on-board — a useful 81% load factor. According to Aena’s “new route” rules, Reus has three new routes starting in S14 with Jet2.com — Belfast International Glasgow and Leeds Bradford. However, according to anna.aero’s “new route” rules, we think the LCC is starting four, East Midlands, Edinburgh, Glasgow and Leeds Bradford. Either way, there was a “new route” cake, being cut by Vicente Pallarés, Reus Airport Director (left) and Julie Munton, Jet2.com’s General Manager Spain and Portugal.