Pau-Pyrénées Airport welcomed visitors (including anna.aero’s Ralph Anker and Jon Lassetter) to the back-to-back weekends of motor sport excitement that is the Grand Prix of Pau, and the Pau Historic Festival, which takes place in May each year. Paris flights are operated using a mix of Air France and HOP! aircraft, while Lyon is served by HOP! and Marseille by TWIN JET.

Pau-Pyrénées Airport in the south-west of France handled over 645,000 passengers in 2013 (an increase of 5.9% on 2012), ranking it 18th among French airports. Located around 100 kilometres east of Biarritz and 150 kilometres west of Toulouse, Pau’s airport is also less than 50 kilometres from Lourdes. Domestic passenger numbers have hovered around the 600,000 mark for over a decade, with Air France having a monopoly on routes to both Paris airports. The airport’s overall passenger numbers peaked in 2008 when international services were at their busiest. Ryanair was offering flights that summer to Bristol and London Stansted in the UK, and Brussels Charleroi in Belgium, while transavia.com was serving Pau from its base in Amsterdam. Ryanair’s services to Pau have now all been suspended and the airport is currently looking for other carriers to offer year-round scheduled services to destinations outside of France. The airport’s last scheduled international service was with CityJet to London City Airport, a thrice-weekly service operated on behalf of Air France, which was suspended at the end of October 2013. 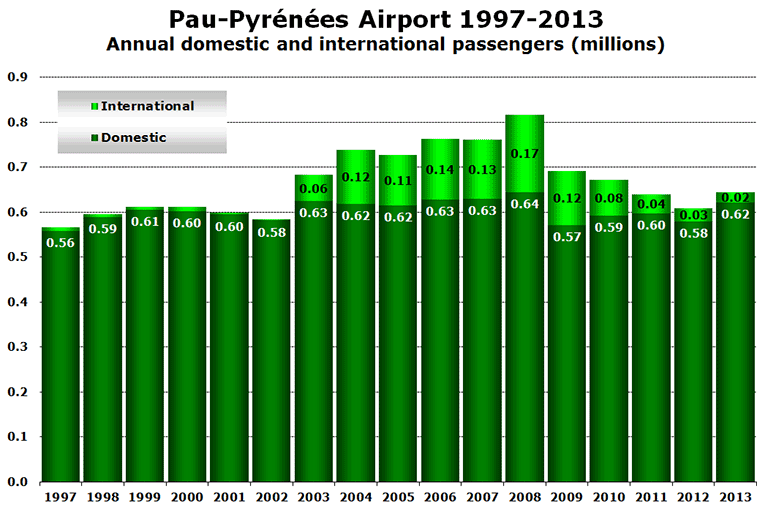 Pau’s seasonality profile is unusual in that the airport’s quietest month of the year is August, normally one of the busiest of the year for a European airport. This can be explained by the fact that the two Paris routes account for over 80% of the airport’s passengers last year, and that these routes cater predominantly for business passengers. In August many French businesses close down for a period, resulting in reduced air travel demand. Overall, the airport’s SVID score is an impressively “good” 1.33. 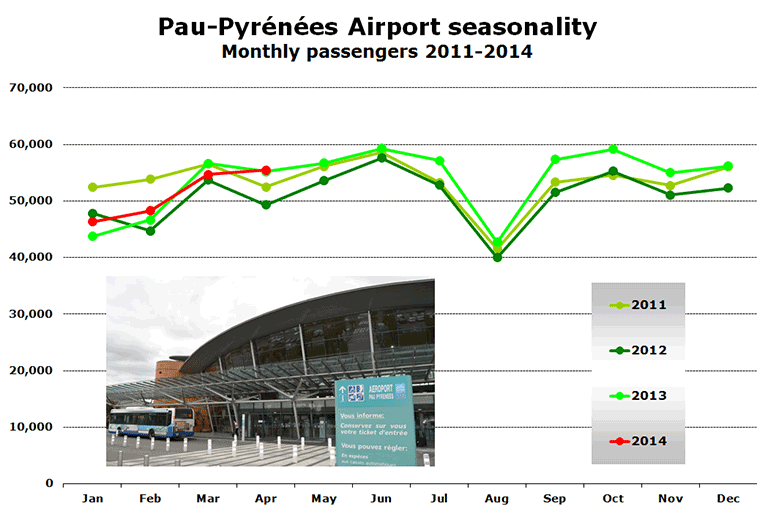 High profile motor races have been taking place on the streets of Pau since the 1930s and race winners have included Formula 1 World Champions such as Fangio, Clark, Brabham, Stewart and Hamilton. This year’s event featured a variety of single-seaters and touring cars. Special guest of honour was FIA President Jean Todt (pictured listening to Mayor François Bayrou during the pre-event gala dinner) who took a particular interest in the race for electric powered vehicles. (All pictures anna.aero except Todt/Mayor picture courtesy of Nicolas Demange – Médias Pack.)

The Grand Prix of Pau has been taking place since the 1930s, on a street circuit through the town, inspired by Monaco. Winners of the biggest race each year have included racing legends such as Tazio Nuvolari, Juan Manuel Fangio, Alberto Ascari, Jack Brabham, Jim Clark, Jochen Rindt and Jackie Stewart, as well as more recent names such as Lewis Hamilton, Romain Grosjean and Juan-Pablo Montoya. Since 2001 a second major event, the Historic Grand Prix, has been held the week after (or before). According to local sources the historic event attracts a greater number of foreign tourists than the event for contemporary cars. This year’s Grand Prix of Pau, held as part of the FIA European F3 Championship, was won by Sweden’s Felix Rosenqvist. Some 31,000 spectators were reported to have attended the races over the weekend, a considerable increase on 2012. anna.aero’s tour of the area around Pau took in mainland Europe’s oldest golf course (established in 1856) and a vineyard, where there was a chance to taste the special ‘biodynamically’ produced wines. And yes, those are the Pyrénées that can be seen in the background, beyond which lies Spain.

anna.aero was recently invited by the airport to visit the region during the weekend of the Grand Prix of Pau. With mostly warm and sunny weather, a Segway tour was a great way to see what Pau had to offer, though sadly access to the racetrack itself for a Segway race was not included. Attendance at the pre-race Gala Dinner included a chance to test one’s slot-car racing skills against local experts, while enjoying delicious food and drink. The following day included a visit to mainland Europe’s oldest golf course, and a tour of a local vineyard, famous for making its wines using ‘biodynamics’. Then it was back into town to enjoy the racing from a grandstand seat. A variety of single-seater and touring car classes took part in qualifying sessions and multiple races. Of particular interest was a race for electric-powered vehicles, which had resulted in FIA President Jean Todt attending the event. A great way to see Pau is on a Segway tour with a guide, though the requirement to wear hairnets can lead to a sudden rush of people grabbing their cameraphones to capture the moment for posterity. The promenade and funicular both offer great views, while local sports are practiced by participants of all skill levels.

anna.aero (aa): What are the top route development priorities for Pau-Pyrénées Airport?

Jean-Luc Cohen (JLC): The airport wants to have an alternative to the Air France network particularly present in Pau Pyrénées. We aim to develop new routes to complement our current business destinations (Paris, Lyon and Marseille), focussing on the leisure sector in different European countries such as Spain, Italy, UK, Ireland, Scotland, Netherlands, Belgium, but also Morocco. Target routes are Madrid, Rome, London, Dublin, Aberdeen, Amsterdam, Brussels and Casablanca. We also wish to expand our French network with new destinations such as Strasbourg, Lille, Nantes and Mulhouse. Pau Pyrénées is once again taking up contacts with different low-cost airlines to launch low-cost routes to Belgium, Italy, UK, Spain and France. The challenge is to convince both low-cost airlines of the potential market reality and the economic partners to assist them to launch new routes.

aa: Ryanair served Pau for several year from London (and other destinations) but stopped serving the airport in 2011. What are the chances that they might return and what in general are the challenges of attracting LCCs to Pau?

JLC: Ryanair stayed seven years in Pau: from 2003 till 2011. The first route opened was London Stansted but Ryanair also operated routes to Charleroi (Brussels) and Beauvais (Paris). In 2011, its increasing requirement of support was considered too much for just Pau Pyrénées Airport as an investor, without support from local authorities. Ryanair makes business decisions and seems to forget past stories, so if we propose route incentives and support that suits them, they can come back in Pau Pyrénées. The difficulty is with respect to the guidelines, because we are in the line of fire of the European Commission.

aa: What new route incentives (if any) and support are you able to offer airlines?

JLC: The airport is self-handling and we offer route incentive measures in accordance with guidelines. The reduction on aeronautical charges are:

Any creation of a new scheduled air route from Pau Pyrénées Airport benefits from incentive measures: reduction of the published tariff for the landing, lighting and passenger fees. Launch incentives are available for the opening of new routes for the first three years.

aa: What are the main attractions for inbound tourists (from France and abroad) of the Pau region?

JLC: The Pyrénées, in winter as in summer! The central position of Pau in South West France: the Atlantic Ocean, Gascony, Lourdes and Spain are situated within a one hour drive. Situated between the beaches and the mountains, Pau Pyrénées offers a large choice of open-air activities (ski resorts at Gourette, Artouste and Pierre-Saint-Martin, paragliding, rock-climbing), golf, water sports (kayak, rafting, hydro-speed), ball sports (tennis, pelote and the jeu de Paume), motor racing, hiking and horse riding. The beautiful countryside, the gastronomy and vineyards makes a country where you benefit from an exceptional quality of life.

Pau Pyrénées also organises each year big international events: “Grand Prix” car racing held in the heart of Pau, international four-star horse trials, the winter horse race meetings and a stage of “The Tour de France”. Pau and its region offer a large variety of cultural events and many historic sites to visit. You’ll be spoilt for choice! 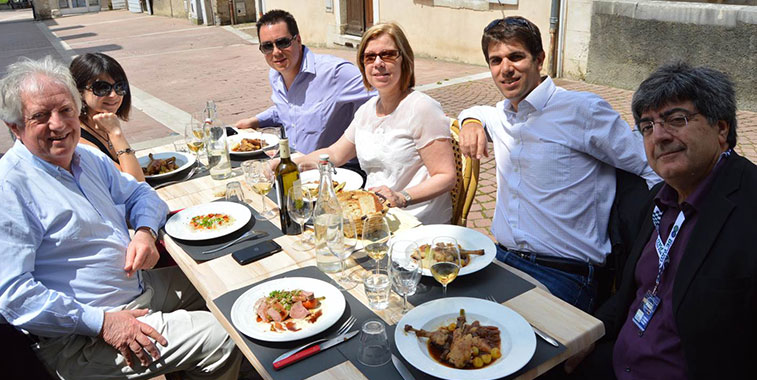