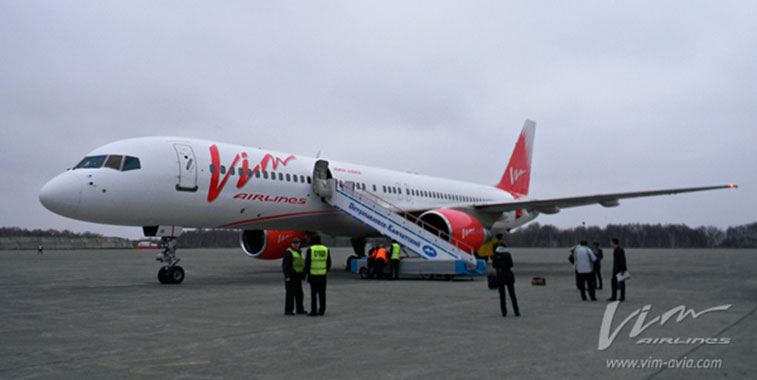 As of August 2014, VIM Airlines operates 30 scheduled non-stop services to countries in both Europe and Asia, utilising a fleet of 11 757-200s. The Moscow Domodedovo links to Makhachkala and Simferopol are the carrier’s biggest airport pairs in terms of weekly seats capacity this summer.

VIM Airlines (also known as VIM Avia) is a Moscow Domodedovo-based carrier, which was established in 2000 by Viktor Ivanovich Merkulov (hence, the name), since when it has operated both scheduled and charter flights to destinations within Europe and Asia, as well as aircraft wet lease services. According to its official website, VIM is currently operating a fleet of 11 757-200s that can accommodate up to 220 passengers. 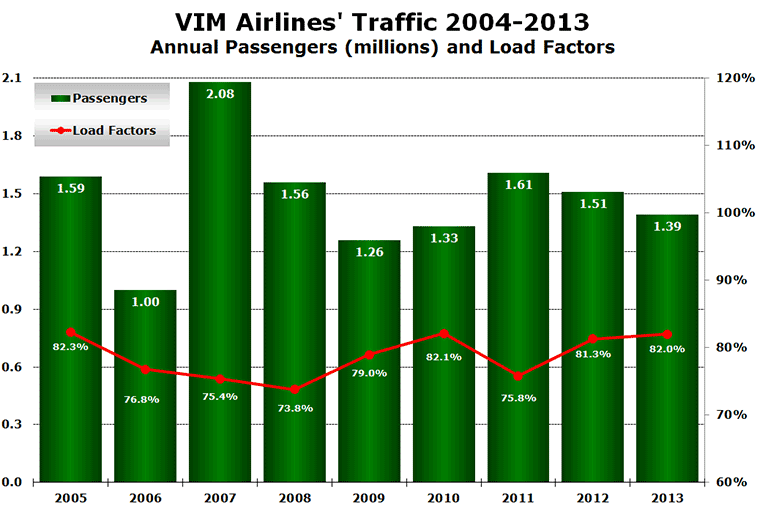 Examination of passenger data between 2005 and 2013 reveals that the airline has had a fluctuating pattern as a result of its diverse operating strategies each year. However, looking back to 2008, VIM’s traffic began to stabilise, with 1.4 million passengers handled last year. In fact, the carrier will likely surpass this number in 2014, as weekly capacity for May this year (33,721 seats) is almost twice as big as the amount recorded in the corresponding period of 2013 (18,334 seats).

According to Innovata schedule data for this August, VIM operates 30 scheduled non-stop services to countries in both Europe and Asia. The carrier’s top 12 routes represent around 80% of total weekly seat capacity, with just three of them being classified as international operations (and are highlighted in the chart below). Moreover, with a yearly increase of 29%, the 1,547-kilometre sector from Domodedovo to Makhachkala still accounts for the majority of weekly seats (13%) this August.  However, as a result of VIM having increased significantly its operations (by 67% or 2,884 seats more) to Simferopol over last year, Makhachkala shares this year’s top position with the city located in the disputed territory of Crimea. 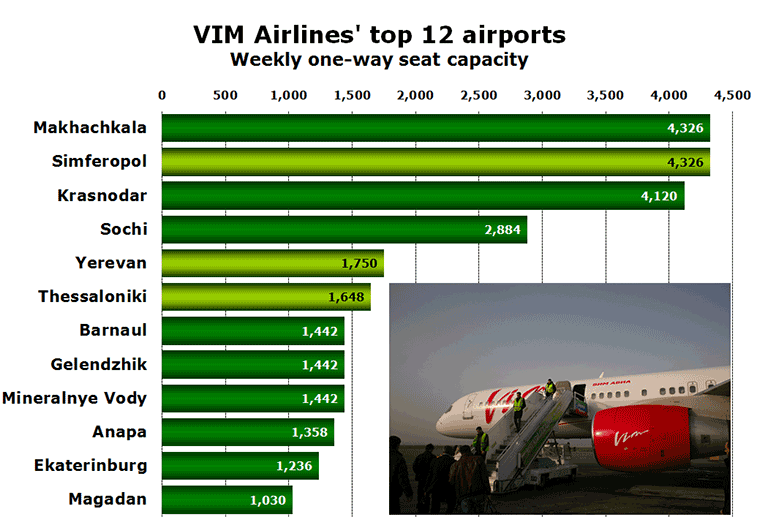 VIM’s weekly seat capacity posted an impressive 84% growth this summer, when compared to data from the same week last year, with an array of new services being launched over recent months. That said, services to Yerevan, Barnaul, Mineralnye Vody, Anapa and Magadan, are all new entrants into this year’s ranking, with the latter having been launched on 2 March. Besides this, the operator had its sights on further domestic growth this week, with two new services launched on 23 May from Domodedovo to Blagoveschensk and Komsomolsk Na Amure.

Domestic sector accounts for 83% of seats

Despite serving a total of nine countries, the sixth largest Russian carrier (according to Innovata weekly capacity) is focussed predominantly on the domestic sector, with 83% of its seats in August having an origin or destination there. The disputed territory of Crimea is not only VIM’s largest international market, but also the fastest growing one, posting a net annual increase of 2,884 weekly seats over last year, and representing a 6.4% share of the airline’s capacity this August. 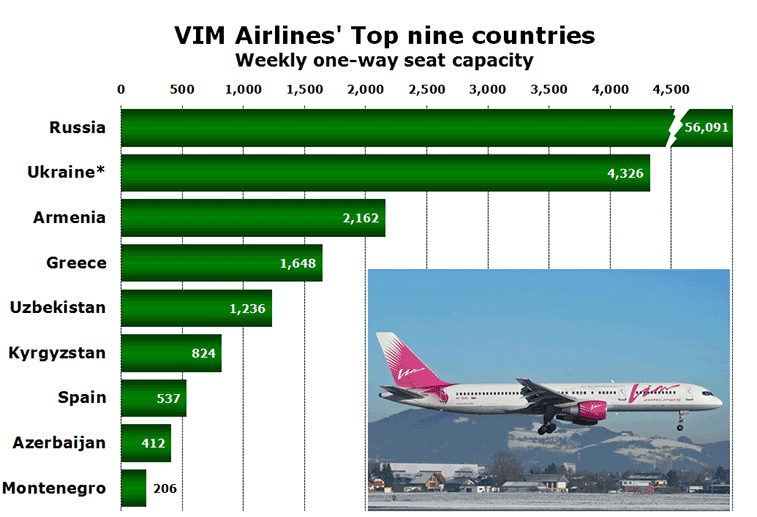 The top two country markets have remained unchanged, and there have been no entrants in this year’s ranking since last August, although there have been movers in that time. Notably, VIM has increased its weekly capacity to Armenia by 1,544 seats, with the country market climbing from fifth to second position this summer. On the other hand, services to Azerbaijan have seen the greatest capacity decline (-33%), due to the operator reducing its frequency on the 1,745-kilometre sector to Ganja from thrice-weekly to twice-weekly.