anna.aero was delighted to be invited by Amsterdam Schiphol Airport to the ceremony of Garuda Indonesia’s inaugural non-stop flight from Jakarta on 30 May. Following its entry into SkyTeam on 5 March, Garuda decided to expand its presence at Amsterdam, making the Dutch gateway its hub for Europe and beyond. Historically, the flag carrier has been serving Amsterdam since 1963, with flights operated via Dubai, as well as more recently via Abu Dhabi. Commenting on the route launch, Emirsyah Satar, CEO, Garuda, said: “Following Garuda’s official joining of the SkyTeam, the opportunities presented by the established SkyTeam hub at Amsterdam are too significant to pass up, as it will be an alternative gateway for passengers who wish to travel beyond Europe. They will be able to choose from 1,064 destinations in 178 countries served by the SkyTeam member airlines.”

Last Friday, the airline inaugurated the 11,352-kilometre sector from #1 most populous city in Southeast Asia (having a population of 9.6 million) that will be operated five times weekly, utilising its brand new 314-seat 777-300. The flight will depart from Jakarta at 00:55 local time and arrive in Amsterdam at 09:40. There is no direct competition on this airport pair, however KLM serves this route with daily flights via Kuala Lumpur. In addition, starting 8 September, Garuda will extend this service to London Gatwick, inaugurating the first ever link between Jakarta and the UK airport. 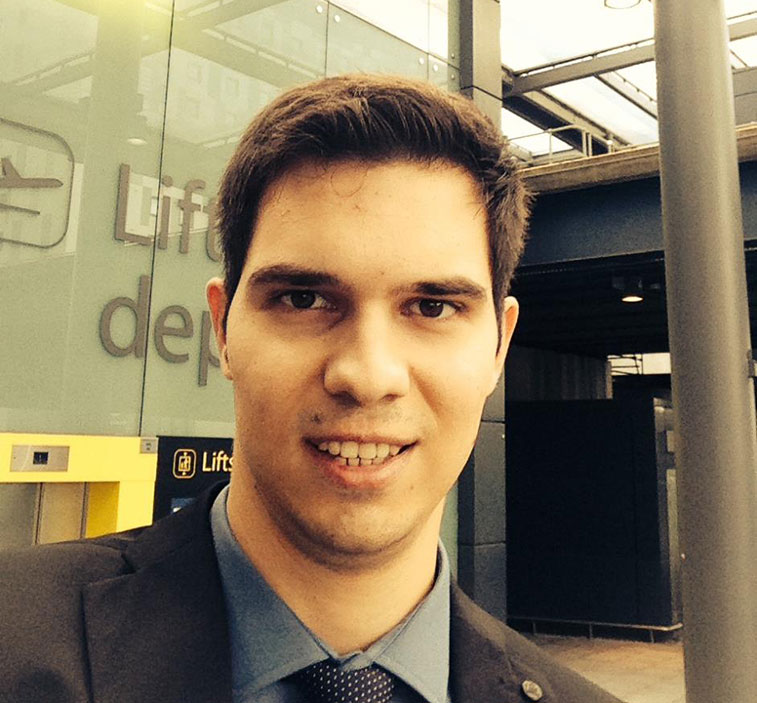 The day before the inaugural: the journey to AMS. Looking a bit like Borat (from Kazakhstan), anna.aero’s Cristescu was gearing up to board easyJet Flight 8881 to Amsterdam at Gatwick’s North Terminal. The early evening (Thursday) flight was 97% full. 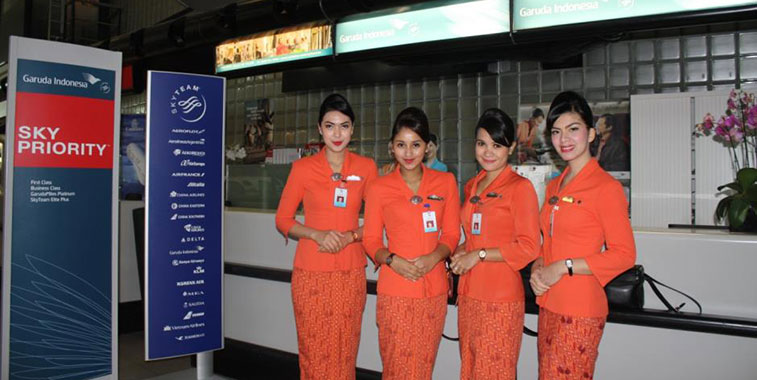 While waiting for Garuda’s first non-stop flight from Jakarta to arrive, we seized the opportunity to meet the airline’s lovely cabin crew on the return flight to Indonesia, which was scheduled to depart at 12:35 local time. Their uniform was inspired by the traditional batik motif of Parang Gondosuli that creates a sophisticated and elegant look. “Our uniforms have three main colours, namely turquoise, blue and orange, all of which have a philosophical value. That said, orange symbolises a warm, friendly and dynamic impression,” they mentioned. 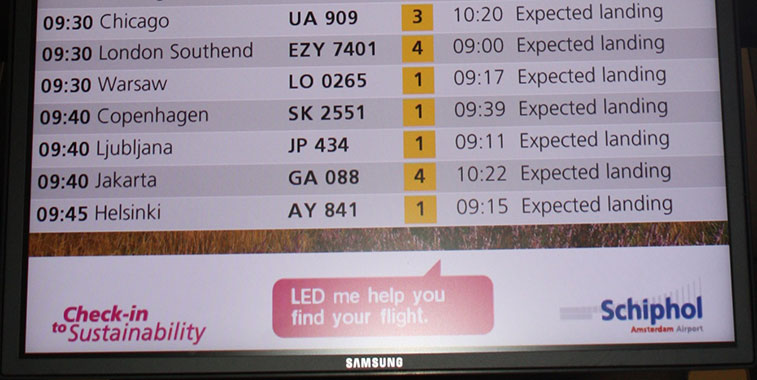 According to Amsterdam’s FIDS, the flight was expected to land at 10:22, being delayed by 42 minutes. Starting 8 September, this service will continue to Gatwick every Tuesday, Thursday, Friday, Saturday and Sunday. 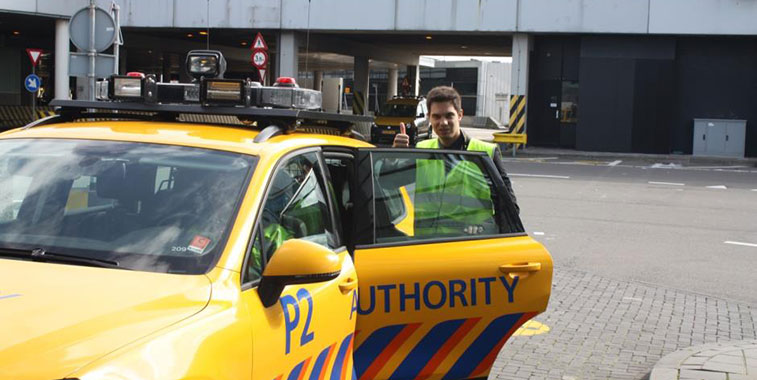 As Garuda’s flight 088 entered the Dutch airspace, Cristescu got a lift in a follow me car to the location where Amsterdam’s fire crew was getting ready to welcome the SkyTeam member’s brand new 777-300 with the traditional water arch salute. 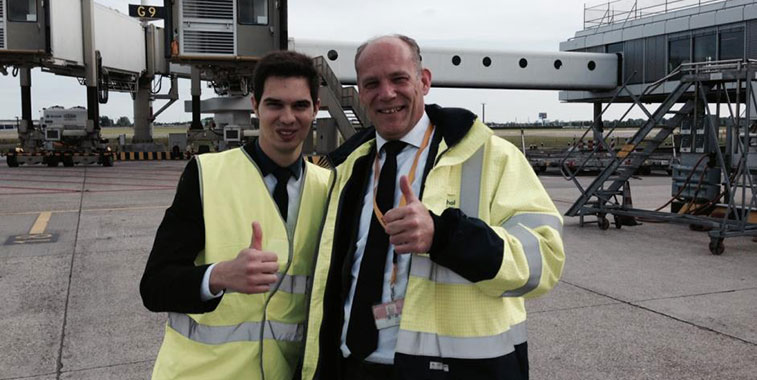 To kill some time, Bert Stroboer, Account Manager, Amsterdam Airport explained to Cristescu that Amsterdam is undergoing a major development programme that will ensure the continued growth of the hub. “By June 2015 the transition from decentralised to centralised security operations in the non-Schengen part of the terminal will be completed. The new development will significantly enhance the airport experience as the security control for connecting passengers from non-Schengen countries will no longer be carried out at the gates, but will be centralised instead,” commented Stroboer. No pressure on Amsterdam’s fire crews, who confessed they have revised intensively the How to Win the anna.aero’s Arch of Triumph guide for Garuda’s arrival from Jakarta. Following the water arch salute, a special ceremony was held at the gate, where passengers were greeted with tulips by a senior delegation of airport and airline officials. 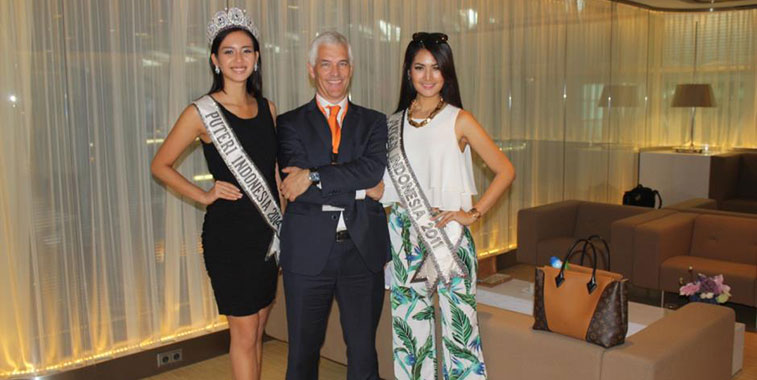 The exchange of gifts between Erik Meijer, EVP Marketing and Sales, Garuda (left) and Ad Rutten, COO, Schiphol Group (right) highlighted the celebrations of Garuda’s first non-stop service to Amsterdam. Furthermore, speaking at the press conference, Retno Marsudi, Indonesian Ambassador to Netherlands, said: “From the perspective of an ambassador, I believe that the opening of these direct operations will not only strengthen the relationship between Indonesia and Netherlands, but will also give many Indonesians another affordable and quality air travel alternative to visit Europe.” 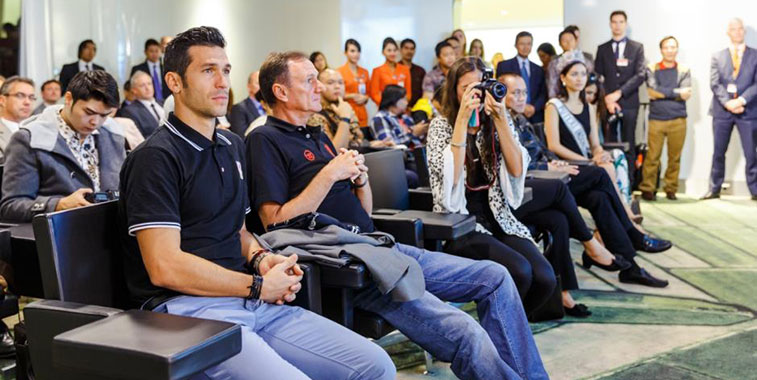 Among the 50 guests that attended the press conference at Schiphol VIP Centre, there were two ex-Liverpool retired players, namely Luis Garcia (left) and Phil Thompson (right). Garuda has been the official partner of Liverpool FC since 2012. Lastly, the celebrations were closed with a special drinks reception that included this fantastic and “very tasty” cake, according to Cristescu. 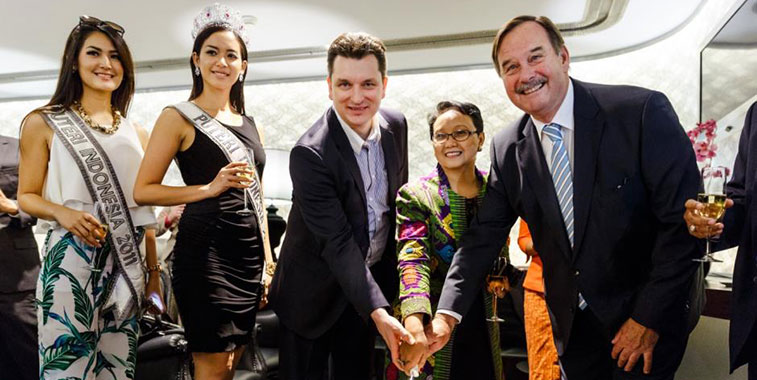