Milanese airport wins this week – but which one? 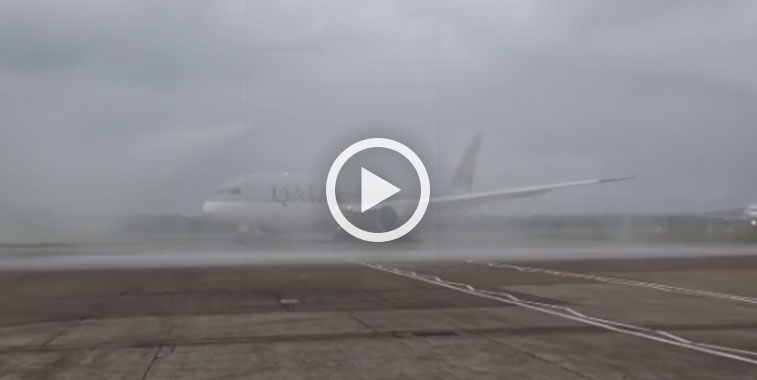 For any firefighters that have cast iron stomach and are not easily scared take a look at this FTWA ‘effort’ at Edinburgh. For those of a nervous disposition, you had best not look. (Click here to view video)

When we enquired this week as to whether our airport partners had undertaken any FTWAs to celebrate their respective new route launches, we received replies such as: “We have drought conditions here,” and even: “It’s too wet here.” We were beginning to think that the world’s airport were ‘scared’ to send us their offerings, given the high standards now expected in this field of airport marketing. Indeed, to even get onto the ‘Arch of Triumph’ 2014 leader board you now need a score which surpasses the average scored by all of last year’s winners — which was 28.5. Now in week 17, this year’s competition is already yielding an average weekly winning score of 29.4 – a result that will only secure you joint ninth spot along with Rotterdam Airport’s FTWA for its welcome of the launch of Turkish Airlines’ services back in March. Standards are high…but so are the rewards. Only at the world’s best airport fire stations will you see an anna.aero FTWA certificate. Keep monitoring! 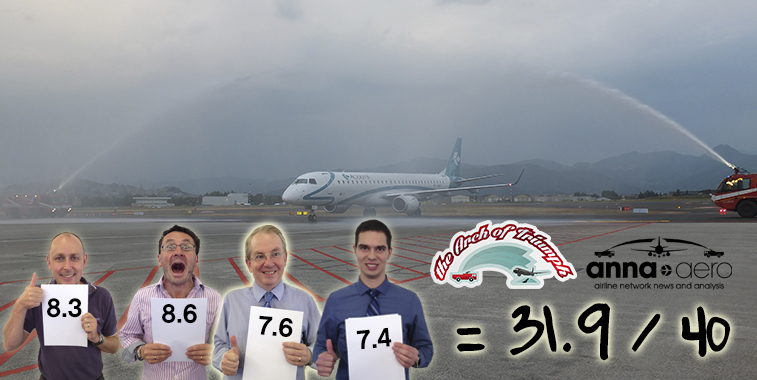 Judge’s comments: This has all the making of the most-desired, perfectly formed, curvy ‘Leaping Dolphins’ FTWA that every airport firefighter in the world dreams of and drills for constantly. It has imperfections – the slight fluffiness and spray – perhaps the early evening warm breeze is the culprit – just look at those burning interior lights in the fire truck. But it is easily good enough to be this week’s winner.

Qatar Airways Doha to Edinburgh 28 May 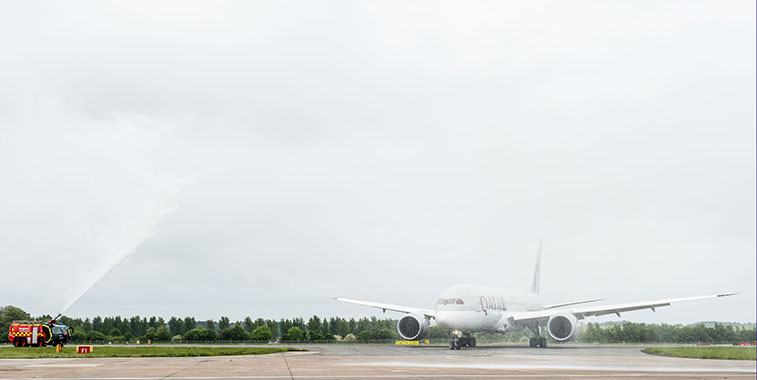 Definition of “Scotch Mist” – a persistent drizzle with poor visibility.

Judge’s comments: There is a British expression called “Scotch Mist” which means all sorts of things  –  that something that does not exist or is worthless – a persistent drizzle with poor visibility – or even a drunken confusion. Whatever it means, it is not a good thing, and for these same reasons this is not a god Fire Truck Water Arch (FTWA). We forgive Edinburgh as the rest of the launch publicity for this new route was very good. But no award for this effort.

Norwegian Oslo Gardermoen to Orlando 29 May 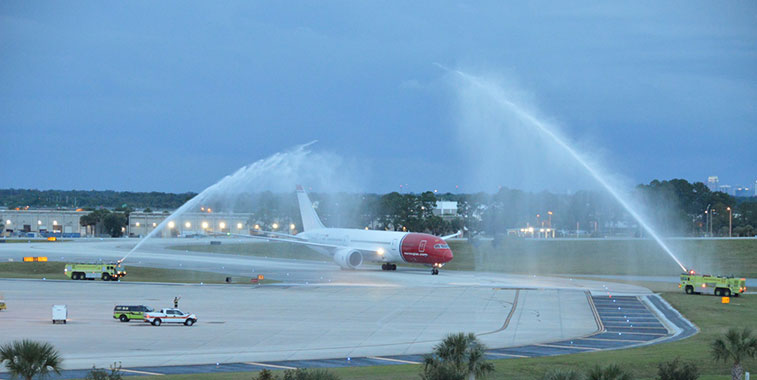 This FTWA would not be out of place behind the centrepiece castle in the Magic Castle.

Judge’s comments: This FTWA style is called a “Minnie meets Micky Mouse.” We’d love to show you some stills from “The Cactus Kid” to show you where the MCO firefighters got the inspiration from, but we’re prohibited from doing so by the Walt Disney Corporation. But it is beautifully done – looks like a magical evening. 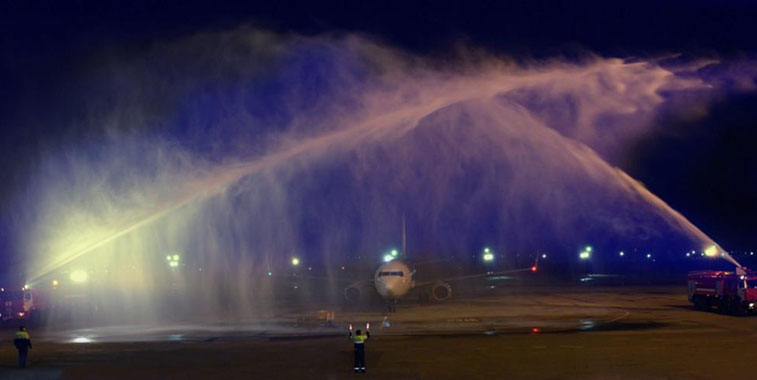 The drama of this shot is in no doubt, however the quality is.

Judge’s comments: Don’t ask me why, but the first thing that came into my head when I saw this FTWA was the epic light sabre duel between Luke Skywalker and his father, Darth Vader in Return of the Jedi. Luke’s anger is boiling over (left tender), as he beats his prostrate father to the floor (right tender), much to the praise and excitement of the evil Emperor. Anyone see that? No…just me then. 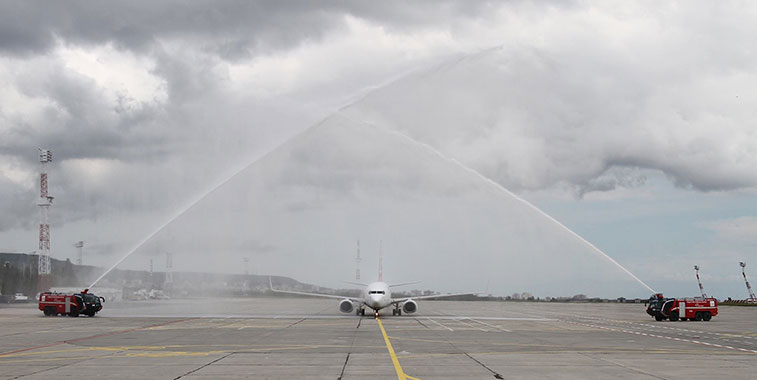 Exotic: A Roman Cross in Varna to welcome Turkish Airlines. It’s a riddle.

Judge’s comments: Any school boy can tell you that this is a Roman Cross – also known as a “Half Roman” in this executive version. So what’s it doing in Varna to welcome Turkish Airlines? We haven’t got a clue either. It’s not bad. But only not bad. 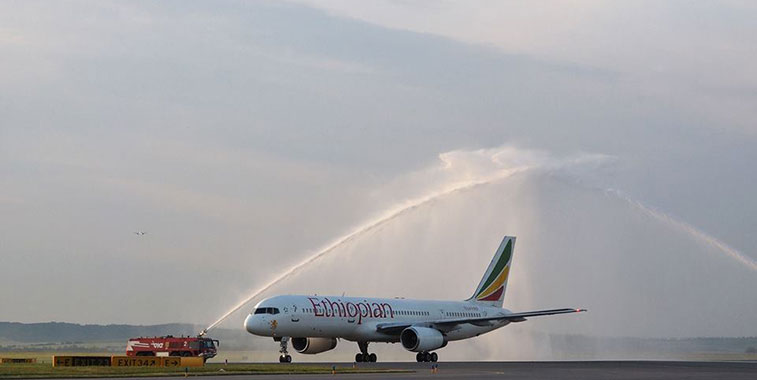 Judge’s comments:  If it had not been for Bergamo this would have been this week’s clear winner. The explosion of thrusted water at the apex of the arch is very close to the hand movements in the ‘Gangnam Style’ of dancing, which was in fact copied from a FTWA technique – bear in mind that the dance was a brief internet sensation last summer, whereas we’ve been judging these arches since the world’s aviators invented celebrating new routes. But Vienna’s work here is not ‘Gangnam Style’ at all – it’s simply called ‘Prater’ after the FTWA’s effect of appearing to revolve like the giant Wurstelprater amusement park feature in the second district of Vienna, Leopoldstadt.