As your one-stop centre of excellence for route analysis and running, anna.aero is proud to bring you news of two vital networking events you need to know about: The 33rd World Airline Road Race (WARR) is hosted by Aer Lingus in Dublin 1-5 October, while bud:runway run takes place on runway 13R-31L at Budapest Airport on Saturday 6 September in aid of child cancer charities and other good causes.

WARR has been declared in Dublin. The 33rd World Airline Road Race (WARR) is being hosted by Aer Lingus in Dublin 1-5 October with the promise: “Come for the craic…leave with the memories.” WARR consists of two road races – 5km and 10km – which both take place on 5 October in Dublin’s historic St Anne’s Park, part of the former estate of members of the Guinness family. Ron Maxwell, WARR’s International Chairman (and an executive with United) comments: “Aer Lingus was a natural choice as this year’s host airline. We have a veteran crew of runners in Dublin and they know all the ins and outs of putting on the event. Dublin is easy to get to with many flight choices, on many airlines and, don’t forget, Dublin is a very fun city.”

The WARR started in September 1982 when a modest group of airline running teams first got together for the inaugural event in San Francisco’s Golden Park. From this small gathering of 300 runners grew a worldwide airline industry running event, now drawing over 1,500 WARRiors. Hosted by a different airline each year, the annual race has developed into a four-day festival travelling the world with a variety of themes. No two WARRs have been the same and, while the core element is the run, the host airline also ensures an exceptional social programme starting at the nominated WARRtering hole.

Among the WARR traditions is the T-Shirt Party. The origins of this go back to 1984 when the British Airways team arrived for the event in Honolulu wearing specifically designed t-shirts. Admired by other runners at the pre-race party, other airlines soon followed suit and by WARR Atlanta 1986, an award had been conceived for the best design.

Hoping to match its 100-strong team from 1993, when Dublin last hosted WARR, Aer Lingus has set up a “Couch-to-5km Running Plan” to encourage all staff, friends and families to get involved. However, there is strong competition for the many medal categories from British Airways, American Airlines and Qantas, not forgetting the Irish-national rivalry between Aer Lingus, Ryanair, Aer Arann and CityJet.

Aer Lingus’ Dave O’Connor, Chairman of WARR Dublin Committee explains: “I would like to invite any walker, jogger or runner from the airline community around the globe to come to Dublin for the World Airline Road Race. Bring your unique culture, enthusiasm and spirit ­– this event is as much about coming together as a community as it is a running race. We want this year’s event to be the benchmark of all future WARRs!”

Meanwhile, dozens of airline and airport executives attending IATA Slots Abu Dhabi have signed up to “bud:runway run”, the 12km running race which will take place on runway 13R-31L at Budapest Airport on Saturday 6 September in aid of child cancer charities and other good causes. “bud:runway run” consists of two races (6km = two runway lengths and 12km = four runway lengths) which has been organised by an expert coalition of race host Budapest Airport, Nike, Wizz Air and anna.aero. Wizz Air serves as both the race’s Platinum Sponsor and Official Carrier, Nike Sport will provide marathon-grade race organisation, expert marshalling and chip timing, while anna.aero is using its reach to 100,000 unique visitors to its specialist route news and analysis to broadcast the event to the world’s air transport community.

Leaders from airlines, airports and enterprises across the aviation community are being invited to compete for a series of anna.aero-Budapest Airport “Golden Cake Trophies” including the key team prize of the “The Fastest Airline in the World” and the top individual categories of “Fastest Airline CEO” and “Fastest Airport CEO” (with separate prizes for male and female winners). 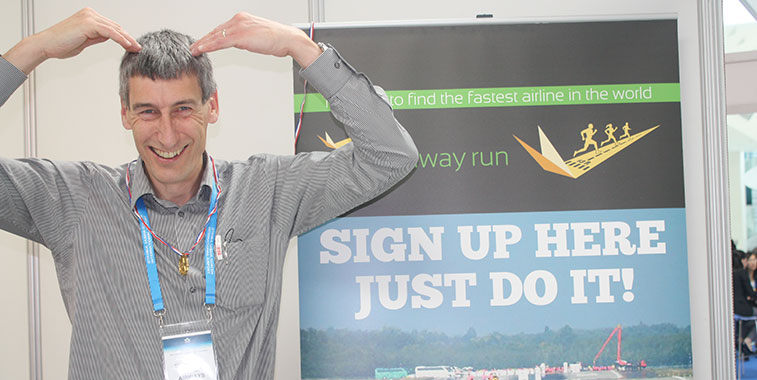 Signing up to bud:runway run at IATA Slots in Abu Dhabi: Marathon runner and member of British Airways’ Athletic Team, Steve Taylor is looking forward to the rare privilege of running on an active runway; “We’ve always been the favourite airline in the world, now we’re going to be the fastest” 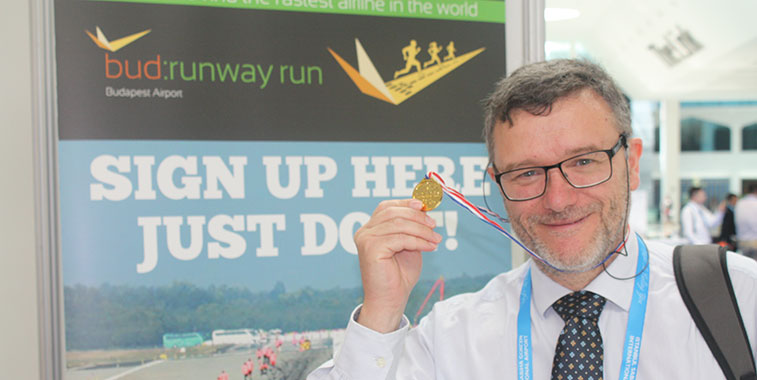 Signing up to bud:runway run at IATA Slots in Abu Dhabi: Alexandre Coutinho, Head of Schedule Planning and Distribution, TAP Portugal thinks “bud:runway run” will be the perfect reason to start training, especially in aid of such great charities. 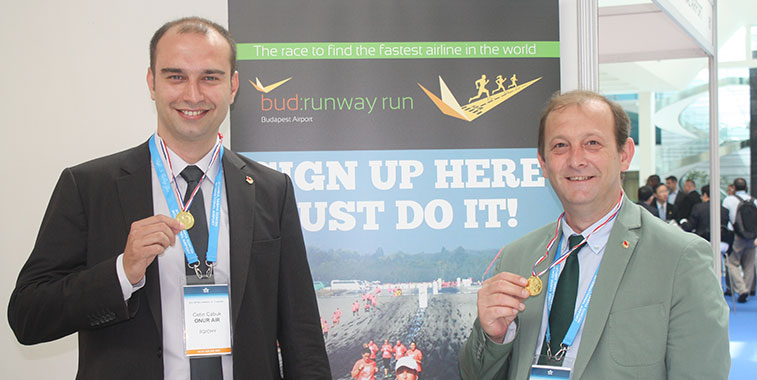 Signing up to bud:runway run at IATA Slots in Abu Dhabi: Onur Air’s Schedule Planners, Volkan Şahintürk and Çetin Çabuk hope to bring home the medals by organising a team to win a “Golden Cake Trophy”. 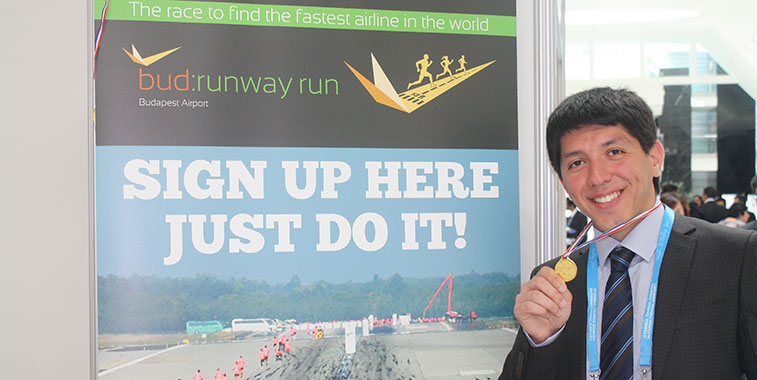 Signing up to bud:runway run at IATA Slots in Abu Dhabi: Komoliddin Mukhamedov from Uzbekistan Airways’ Strategy and Planning Department signs up, vowing to increase his training to make sure he wins a real medal. 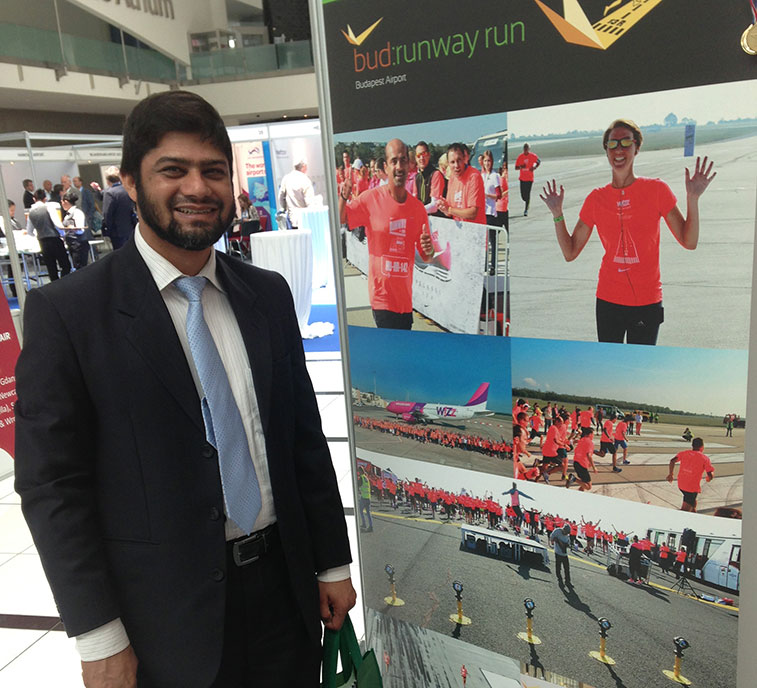 Signing up to bud:runway run at IATA Slots in Abu Dhabi: Pakistan Airlines’ Irfan Ullah, a cross-country runner, is looking forward to his introduction to Budapest, albeit an unconventional one. 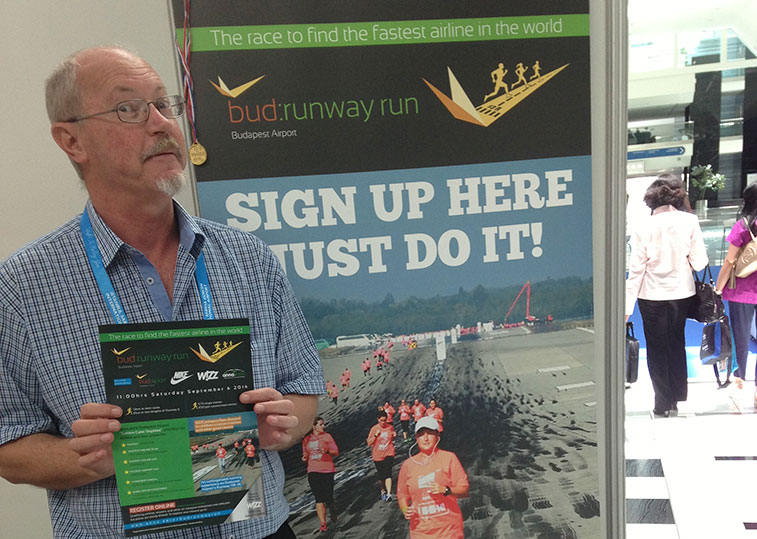 Signing up to bud:runway run at IATA Slots in Abu Dhabi: Mikkie Miller, Slot Coordinator, Airports Company South Africa thinks the running team at Cape Town will want to make a weekend of it. 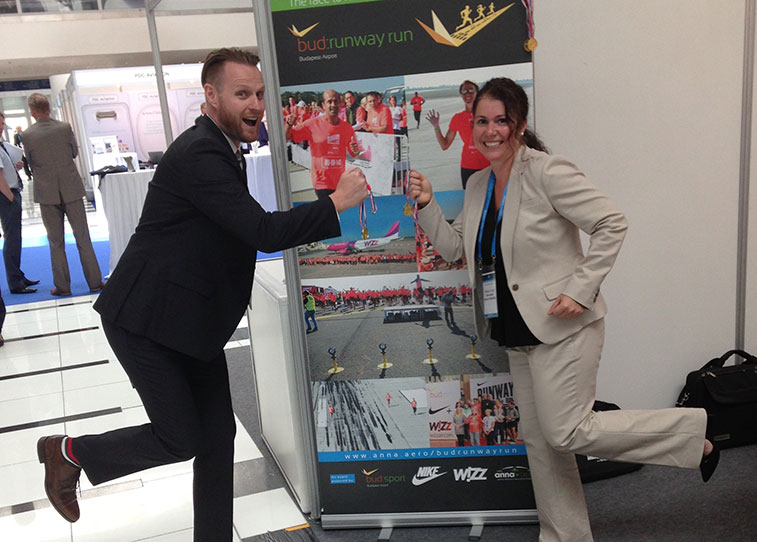 Signing up to bud:runway run at IATA Slots in Abu Dhabi: Schedule Planners from Vancouver Airport, Kyle Galbraith and Melisa Luongo. As members of the airport’s running club they can’t think of a better reason to visit Budapest for the first time. 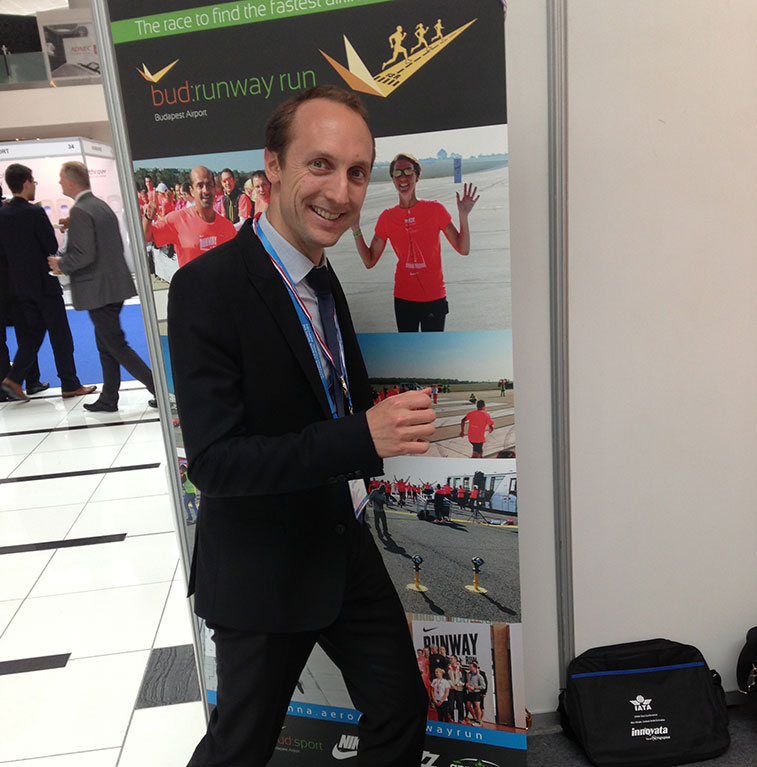 Signing up to bud:runway run at IATA Slots in Abu Dhabi: Keen runner François Decarreau, Slot Manager, Air France thinks 12km is the perfect race length: “6km is great for novices but would be over too quick for me, I’d like to make the most of this rare opportunity to run on a runway.” 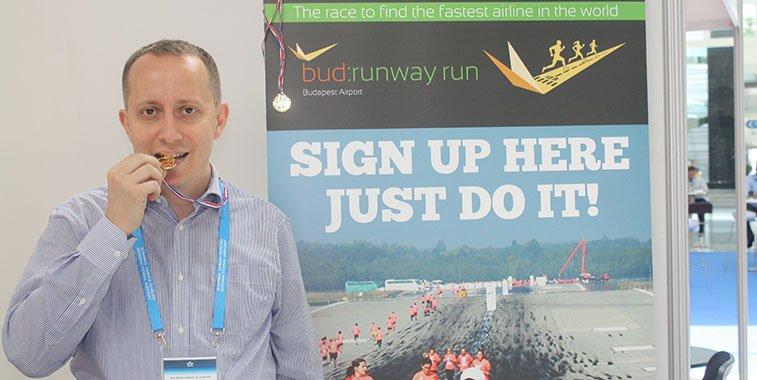 Signing up to bud:runway run at IATA Slots in Abu Dhabi: Dragan Popovic, Scheduling, Montenegro Airlines. Hey Dragan – can you bring our medal back please? You have to race “bud:runway run” if you want to get one (every participant will!!!)