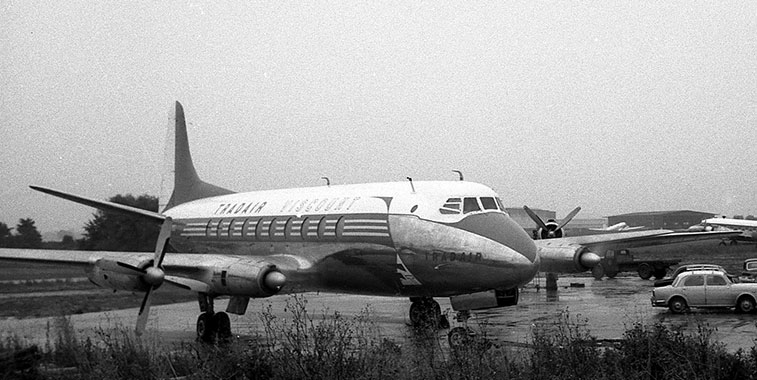 Them were the days. The last time London Southend Airport won an award as prestigious as anna.aero’s ‘Arch of Triumph’ was way back in 1961, when Tradair were errr…plying their trade at the airport. That award was for Neatest Perimeter Fence. Image: Courtesy of Wikipedia.

We had eight FTWAs submitted for this week’s anna.aero ‘Arch of Triumph’ prize. But it was not a lucky-eight for Air China at Munich which was squeezed out by a controversial winner at Stobart’s London Southend Airport which performed a rare style of arch evoking the unique metrological phenomenon found in the Thames Estuary. As a result, London Southend becomes the UK’s fourth entry into the Top 10 FTWAs so far in 2014, and London’s first ever winner, despite having seven airports with commercial services. 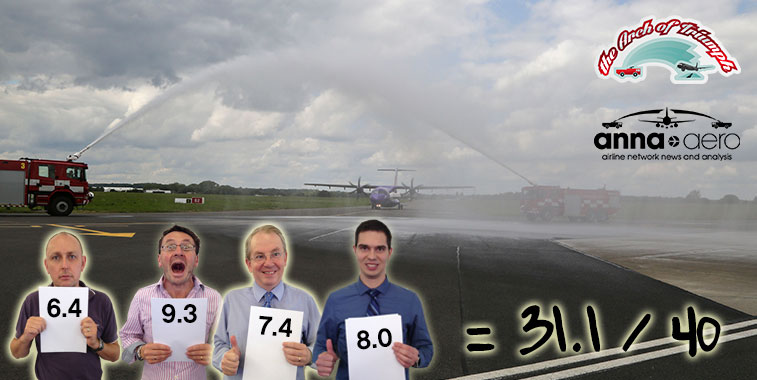 Judge’s comments: Not everyone likes this style of FTWA which is sometimes mistakenly thought to be an accidental collision of the two arches. But it is in fact deliberate, it’s called ‘Thames Estuary Fog’ and, believe it or not, it’s actually far more difficult to achieve than it appears. Good winning effort from Stobart’s crew! 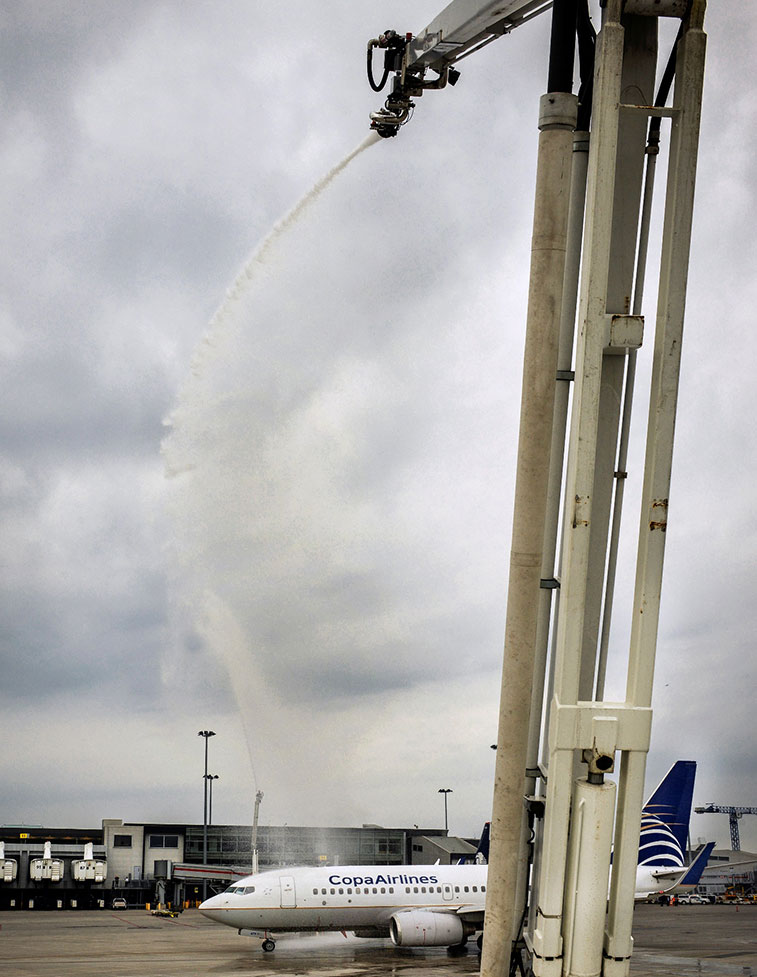 Judge’s comments: Depending on the particular scenario, an articulated extinguishing arm is just what our brave airport firefighters need to assault a major conflagration, but wielding a 20-metre arm over a diddy 737-700 on what looks like a pretty ugly day at YUL was not the brightest idea and the results are predictably inelegant. 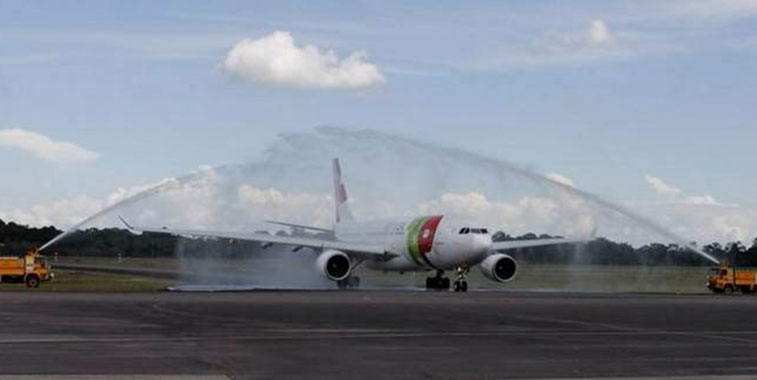 This is a great route for the Portuguese flocking to this city to watch United States vs Portugal game at the Arena Amazonia on June 22.

Judge’s comments: Manus lies at the confluence of the Negro and Solmoes rivers which meet to form the Amazon. It’s where the dark-coloured waters of the former and the muddy waters of the latter flow side by side for 20 kilometres without mixing – you may have seen it on TV, or even in real life if you’ve been on this new service. Well, very appropriately, the water jets from these two monitors don’t mix very well either. It’s hard to see why some judges score this FTWA so highly. 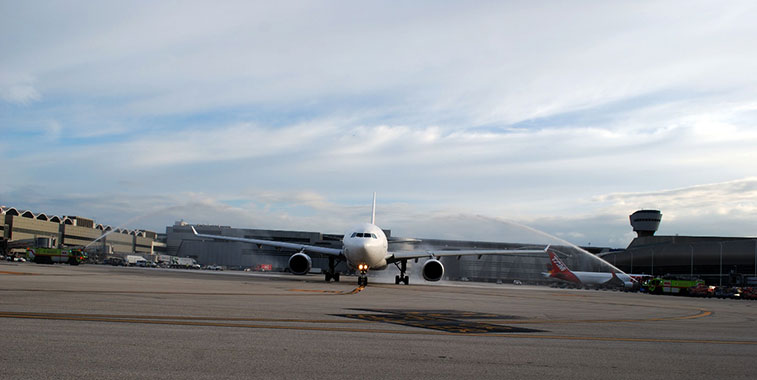 Where are the Miami [leaping] Dolphins???

Judge’s comments: Ummmm, we’re trying to be really nice about this MIA effort. Perhaps a little bit more gas and maybe if they rolled the trucks a little closer in?? Perhaps it was all there and the photographer missed the moment?? Yes, let’s go with that – it certainly looks like it had all the makings of symmetry… 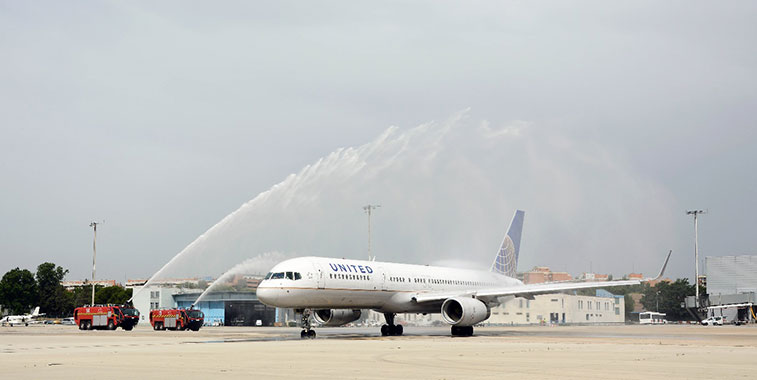 “Hey Juan, what are you doing on my side, you were meant to go starboard!”

Judge’s comments: Ok, there are not a lot of rules to this competition (you can read them here in the “How to Win the anna.aero Arch of Triumph.”) But like all sports, some things are written down, and some are just left to conventional common sense. Like not putting two trucks on the same side. This FTWA is all a bit Pablo Picasso – the ‘Arch of Triumph’ is a skills contest, not an art form…or is it??!! Whichever it is, this FTWA won’t triumph with these low scores amigos. 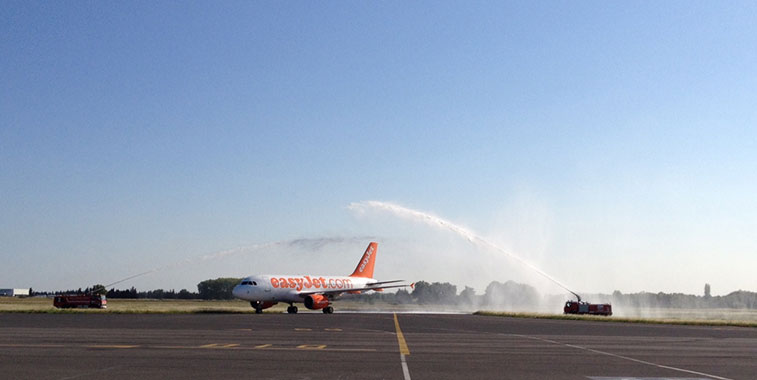 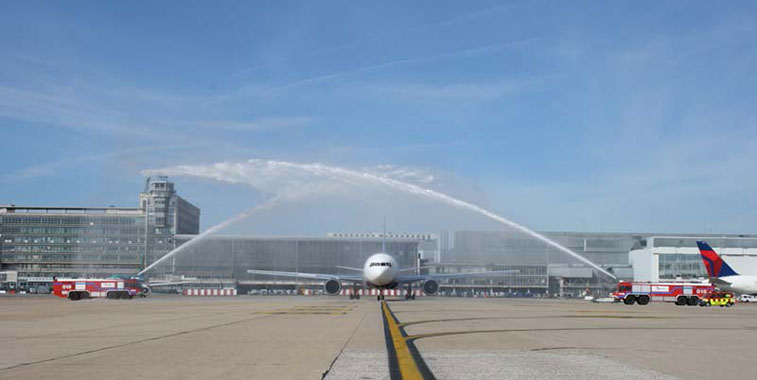 Topical: This arch is called a Jean-Claude Juncker after the former Luxembourg Prime Minister and candidate for the next President of the European Commission. At least it’s more exciting than he is. 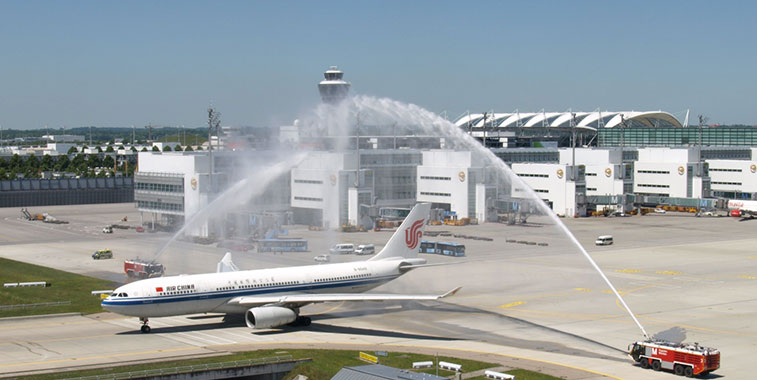 At first it was thought this photo had been taken from the tower…then our amazing analytical judges noticed that the tower is in the photo itself. It just goes to show what brilliant observations we make on anna.aero.

Judge’s comments: Munich Airport has won a few anna.aero ‘Arch of Triumph’ prizes and this one comes very close – extremely close. But the fluffing of the starboard-side arch – known as the ‘Löwenbräu-style’, has not been emulated on the port-side and this has cost vital points from those judges educated and observant-enough to spot this error.