In apparent retaliation for Delta’s rapid expansion in Seattle-Tacoma, Alaska Airlines, in the space of just 10 days, is starting seven new routes from Delta’s hub at Salt Lake City. Celebrations for the airline’s new Los Angeles service were Disney-themed, with Mickey Mouse “ears” much in evidence. The airline’s other new routes from the Utah hub are Boise, Las Vegas, Portland, San Diego, San Francisco and San Jose.

While US carriers as a whole enjoyed a highly profitable 2013, the country’s two most profitable airlines (based on operating margin) according to Airline Weekly were Allegiant Air (15.5%) and Alaska Airlines (12.4%). While Allegiant Air is very much a niche carrier which avoids competition with other carriers, Alaska Airlines (and its subsidiary Horizon Air) is more of a traditional carrier, with a major hub in Seattle-Tacoma and regular all year-round flights.

The airline has been consistently profitable in recent years and its passenger numbers passed 26 million for the first time in 2013. With a fleet of over 130 737s (Alaska Airlines) and over 50 Q400s (Horizon Air) the airline’s growth has been solid rather than spectacular in recent years. 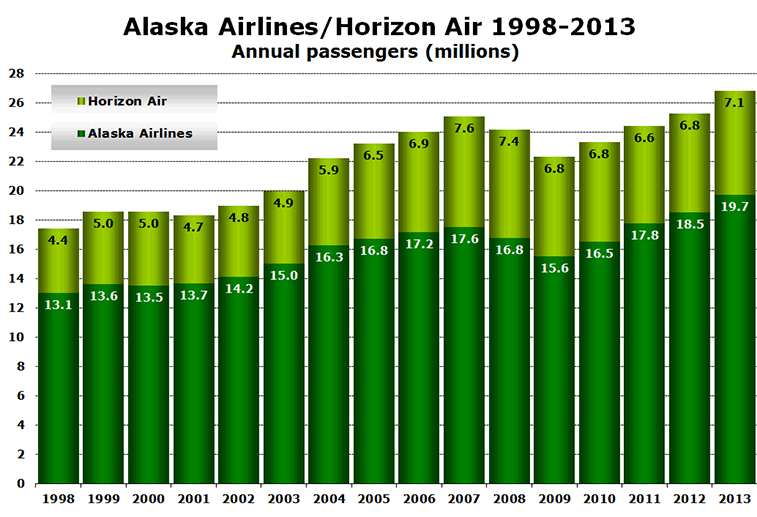 Alaska Airlines’ main base is at Seattle-Tacoma Airport, from where it operates a network of over 70 routes. Last November it added Colorado Springs and Omaha to its Seattle-Tacoma network, both routes operated daily with Q400s. The airline’s highest frequency routes from Seattle-Tacoma this August are Portland (164 weekly departures), Anchorage (131), Spokane (116) and Los Angeles (87).

The airline is coming under growing pressure in Seattle-Tacoma from Delta which wants to make the airport a major gateway for its Asian routes. However, the obvious plan of coming to an agreement with Alaska Airlines to provide short-haul feed for its long-haul routes has not proved appealing enough to the local carrier, and so Delta has rapidly been growing its short-haul network at the airport, overlapping significantly with Alaska Airlines. 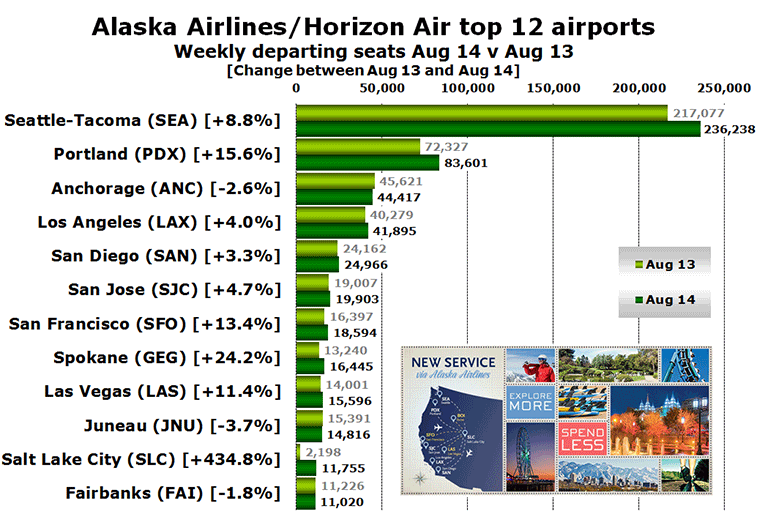 Other new services the airline plans to launch this year include Seattle-Tacoma to Albuquerque, Detroit and Baltimore/Washington in September, as well as daily flights to Cancun starting in November.