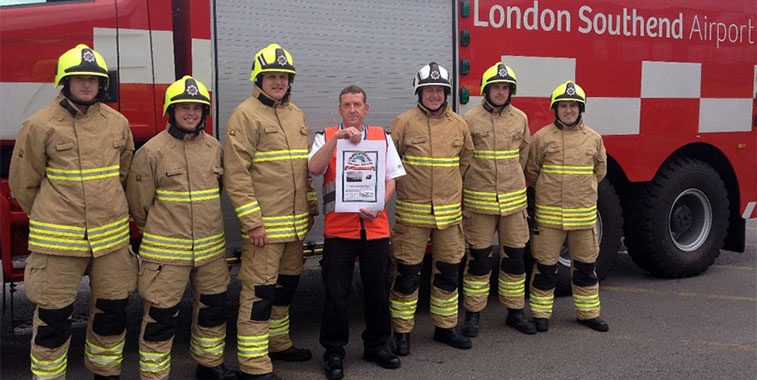 anna.aero would like to apologise for some blatant favouritism (that you would never see from the remaining judges) in terms of the scores allotted by our Romanian-born judge and Assistant Editor Vlad Cristescu. He scored Sibiu’s FTWA a 9.7, while the average from the remaining three judges was just 8.3, and he went even further with the offering from Iasi, which he gave a perfect 10 (against an average from the remaining three judges of 8.9). As a result of this scoring irregularity, the two Romanian regional airports secured a famous one-two, kicking the bottoms of much bigger airports (with bigger marketing budgets) like Athens, Brussels, Dallas/Fort Worth and Miami. With partisan feelings running high in the anna.aero offices this week, it is at this point we would just like to remind Vlad that his team aren’t in Brazil taking part in the World Cup, having been beaten 3-1 in a play-off by Greece. 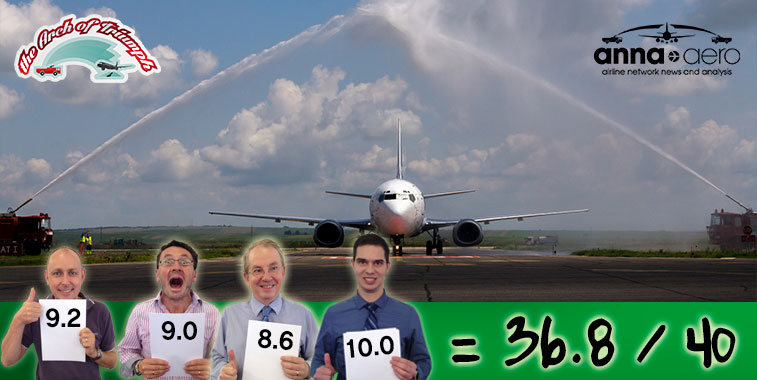 Judge’s comments: In 2013, Iasi Airport handled just 232,000 passengers. By contrast Dallas/Fort Worth (also entered this week) was the ninth largest in the world last year. Despite the significant void in size, it is the tiny Romanian airport that is dishing out the FTWA lessons this week. Bine lucrat!! Marc: 9.2; Paul: 9.0; Ralph: 8.6; Vlad: 10.0.

Judge’s comments: This is a very well-balanced FTWA and in an ordinary week this could have become the fifth UK airport to win the ‘Arch of Triumph’ in 2014 (the country having been barren in 2013). The arch is let down slightly by the fact that the water jets are not quite meeting at the time of the photograph. Marc: 8.9; Paul: 8.5; Ralph: 8.2; Vlad: 7.5. 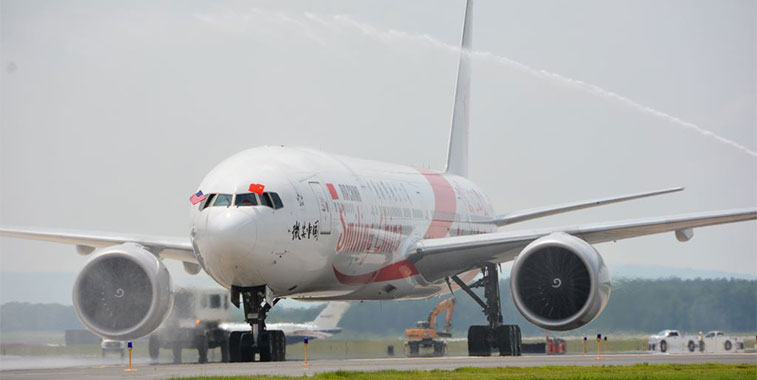 Judge’s comments: It’s always a bit embarrassing when an airline inaugural flight has been blessed with a special livery aircraft, only to be let down by the rest of the new route marketing mix. What a waste…plus nobody would have been ‘smiling’ after this FTWA. Marc: 4.2; Paul: 5.1; Ralph: 7.7; Vlad: 3.9. 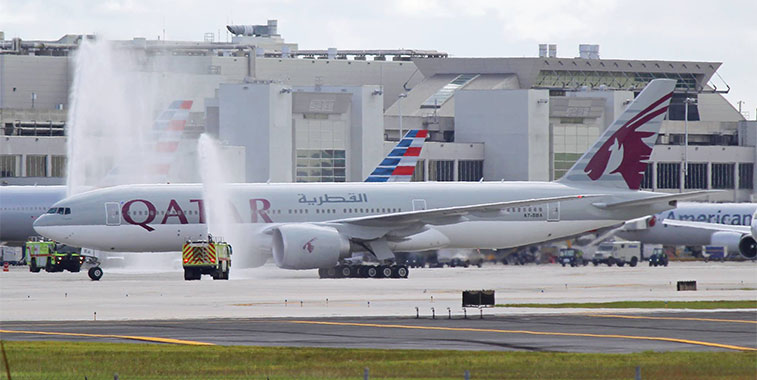 One of the crews knew the dimensions of a 777-200LR. The other didn’t (Photo credit Luis Delgado).

Judge’s comments: Scoring slightly better than DFW, but no less affected by the ‘Big Boy, Little Boy’ syndrome that afflicts many an FTWA around the world, Miami’s finest firefighters were clearly off-shift on 10 June to welcome Qatar Airways. Did no-one explain to them the significance of the arrival of first service by one of the MEB3?? Marc: 2.5; Paul: 4.9; Ralph: 1.5; Vlad: 3.1. 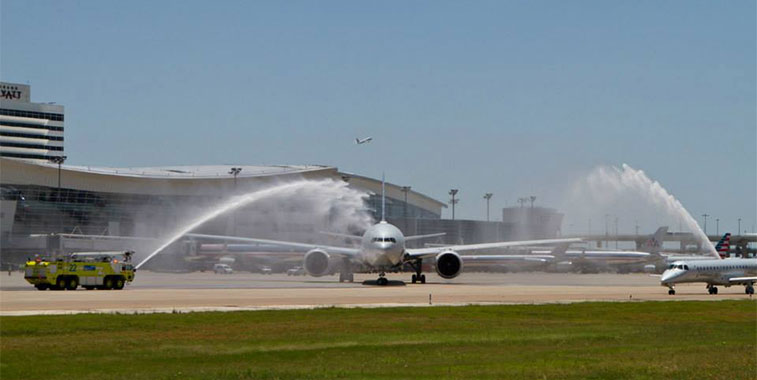 Judge’s comments: Clearly the Texan mega-hub firefighters were missing the direction of Sharon McCloskey, VP Marketing at DFW last week (she was in Abu Dhabi attending Slots) — as this effort would not have happened on her watch. One can only hope that her marketing talents will be evident at the airport’s new route launch. Marc: 2.2; Paul: 5.5; Ralph: 1.7; Vlad: 2.7. 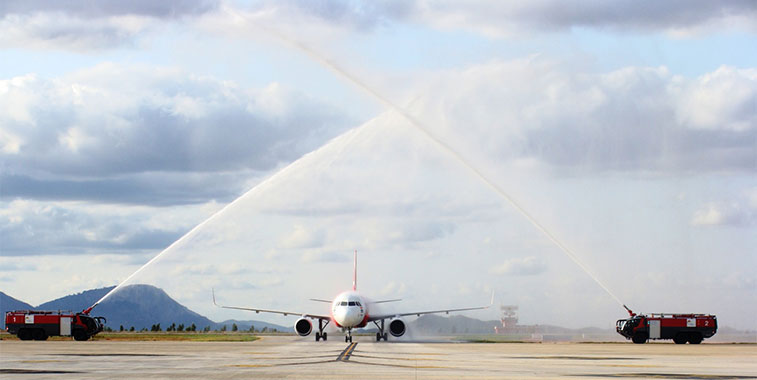 Captured on the positioning flight from Chennai, this FTWA christens the start of a seismic change in India’s LCC market – the start of AirAsia India.

Judge’s comments: The enormity of one of the world’s biggest LCCs planting itself in a new country has clearly wreaked havoc with the concentration of Bangalore’s firefighters. More nervous than the Mexican back four as they faced the Brazilian front line this week at the World Cup, the result is average. Marc: 7.6; Paul: 6.8; Ralph: 6.9; Vlad: 6.1. 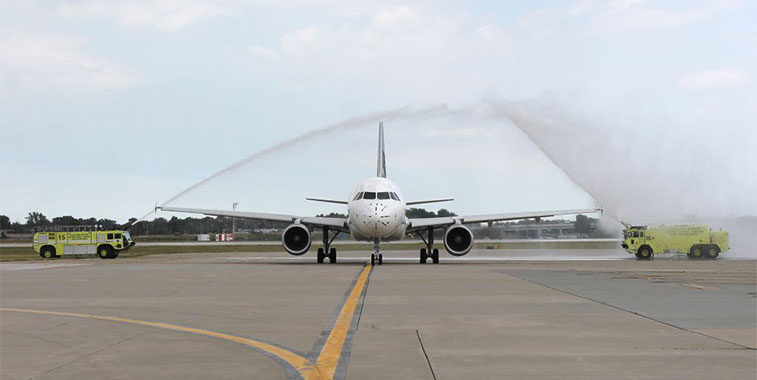 Judge’s comments: A complete mish-mash of FTWA styles here in Cleveland for the launch of the Frontier base. Maybe the right hand tender wanted to make the airline feel at home offering an homage to the snow-capped mountains that surround its home airport of Denver. However noble the intention, the result is ugly. Marc: 5.1; Paul: 4.6; Ralph: 3.6; Vlad: 5.9. 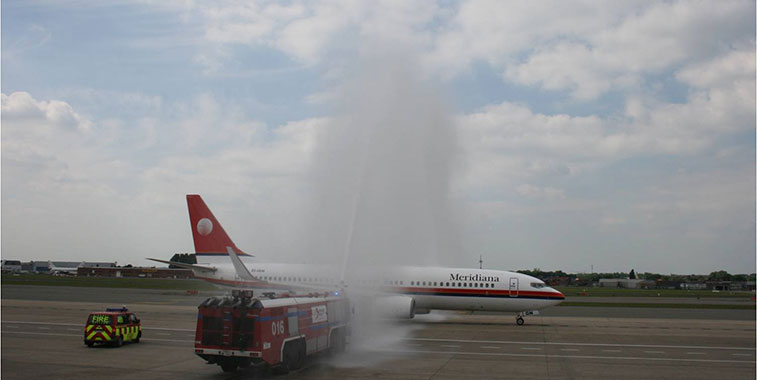 A side-on view of an FTWA is never the best.

Judge’s comments: A photography lesson is clearly required at Brussels. Call us purists, but the anna.aero judges do like to see an FTWA head-on in order to give out the higher scores. So despite the fact it has entered five times this year, the Belgian capital airport scores another blank – sorry guys! Marc: 4.4; Paul: 5.6; Ralph: 4.4; Vlad: 4.4. 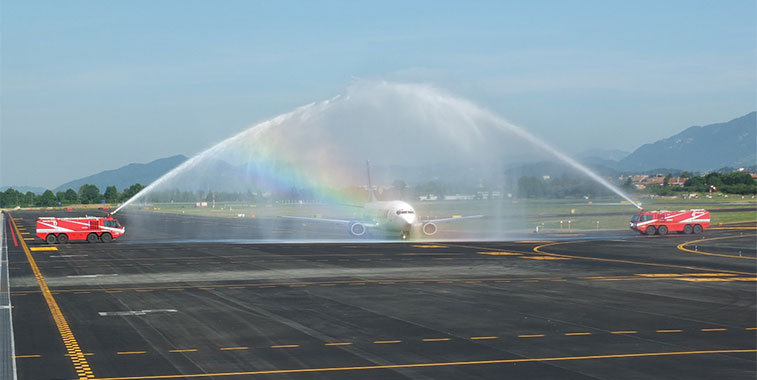 Look at that smooth runway tarmac at Milan/Bergamo! The FTWA’s not bad either.

Judge’s comments: This was never going to win with a Romanian judge present, despite the almost perfect pair of ‘Leaping Dolphins’ and a rainbow on display. Marc: 9.2; Paul: 9.1; Ralph: 9.3; Vlad: 6.7. 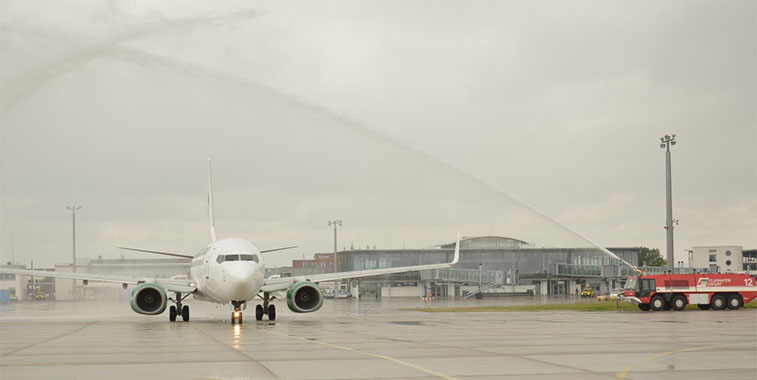 139 passengers were on this inaugural flight – they rated this FTWA ‘wunderbar’!

Judge’s comments: Did Erfurt have its old tender on duty on 14 June on the left-hand side of this FTWA? The brutal cropping of this image tends to suggest that this is the case – either that or it didn’t show at all and there is an Ops guy with a garden hose there instead. Shame, as it’s a good effort from Erfurt. Marc: 8.1; Paul: 7.5; Ralph: 6.5; Vlad: 6.3.. 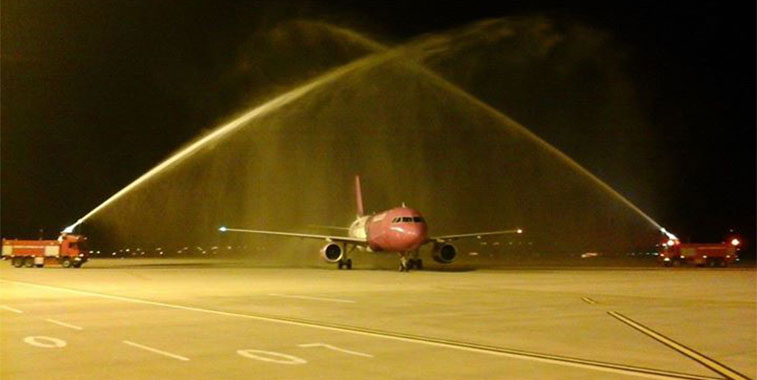 The best of our Roman crosses this week – from a Romanian airport.

Judge’s comments: There were three ‘Roman Cross’ FTWAs on show this week, and this is the pick of the bunch, with a well-poised night shot of this popular FTWA style. Felicitari Sibiu. Marc: 8.8; Paul: 8.5; Ralph: 7.7; Vlad: 9.7. 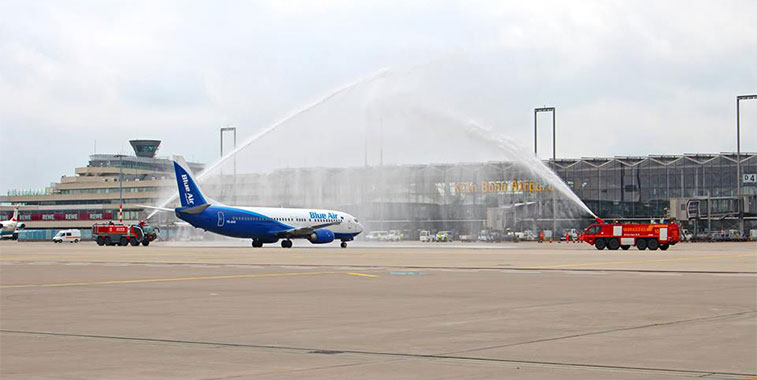 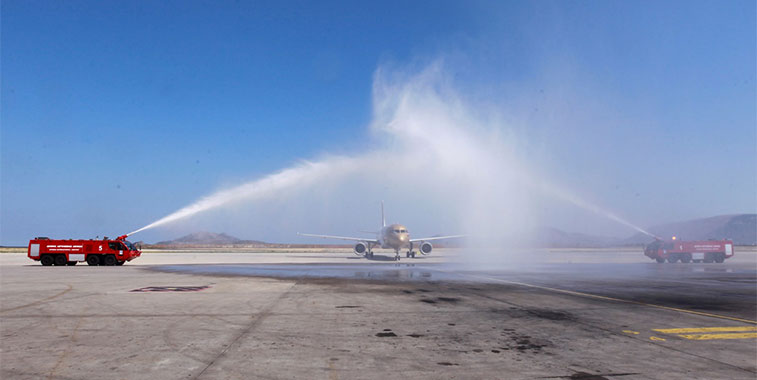 Cloudless skies, but clearly the wind had a hand in this FTWA.

Judge’s comments: With a gold-coloured aircraft, some of the judges suggested that this FTWA should have been named a ‘Golden Shower’ but we resisted the urge. With its right hand side ‘pillar’ of water, evidently there was a local influence in this less well-known ‘Acropolis’ style FTWA. Marc: 6.2; Paul: 6.6; Ralph: 5.6; Vlad: 6.4.