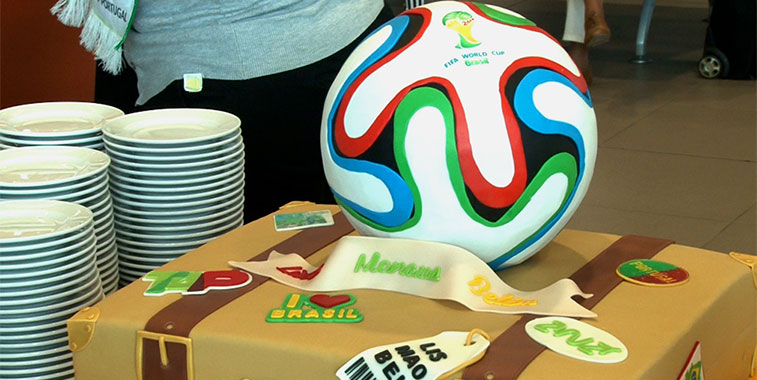 This great cake, celebrating the start of TAP Portugal’s new service from Lisbon to Manaus and Belem in Brazil, won last week’s anna.aero Cake of the Week award. Portugal is the third biggest country market from Brazil (after US and Argentina), with Lisbon the third biggest city market after Buenos Aires and Miami.

With the eyes of the sporting world on Brazil, anna.aero this week takes a closer look at the country’s international air services. Of the 31 other countries competing in the FIFA World Cup, there are direct air services from Brazil to 15 of them. In total there are non-stop flights from Brazil to 33 countries this July, with Morocco the most recent new country market thanks to Royal Air Maroc’s flights from Casablanca to Sao Paulo which began last December.

The leading country market by some way is the USA, which has extended its lead over Argentina since last summer. Of the top 12 country markets only Panama, the UAE and Peru have not qualified for the current World Cup, while the United Kingdom is represented by England. 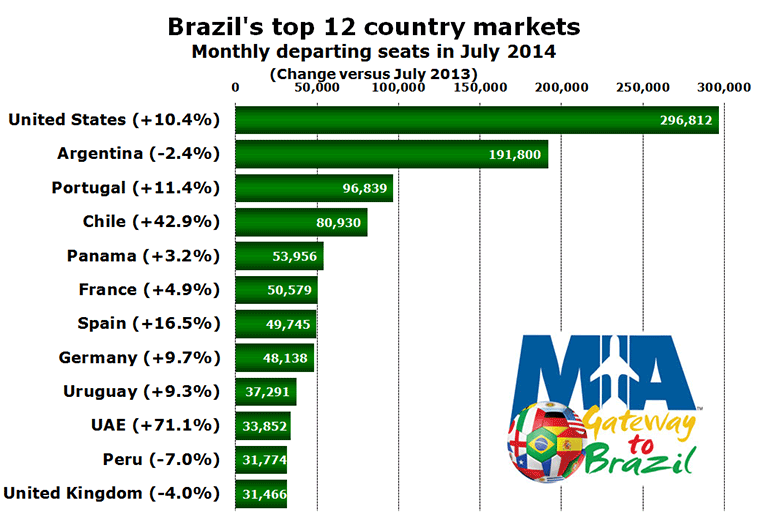 The fastest-growing country market is the United Arab Emirates, where seat capacity has grown by over 70% in the last year. Emirates has increased seat capacity on its daily flights to Rio de Janeiro and Sao Paulo by replacing its 777-200LRs with larger 777-300ERs. In addition, Etihad Airways increased frequency on its Abu Dhabi to Sao Paulo service and also moved to a larger aircraft.

The largest European market is not surprisingly Portugal, which ranks third overall for seats, with almost twice as many as France, Spain and Germany who are battling it out for second biggest European market. Last week saw the launch of TAP Portugal’s newest service to Brazil from Lisbon, with thrice-weekly flights to Manaus, onto Belem, and then returning to Lisbon.

In the last 12 months a number of high-profile long-haul routes have been launched to Brazil from Africa, Europe and North America. The launch of new services to Sao Paulo from both Los Angeles (with American Airlines) and Madrid (with Air Europa) on the same day last December made for a great pre-Christmas bonus for the airport.

Analysis of schedule data reveals that Buenos Aires is the leading international destination from Brazilian airports, though by splitting traffic across two airports Miami becomes the leading airport destination. Lisbon leads the way for European destinations with Frankfurt, London, Madrid and Paris all making the top 12. 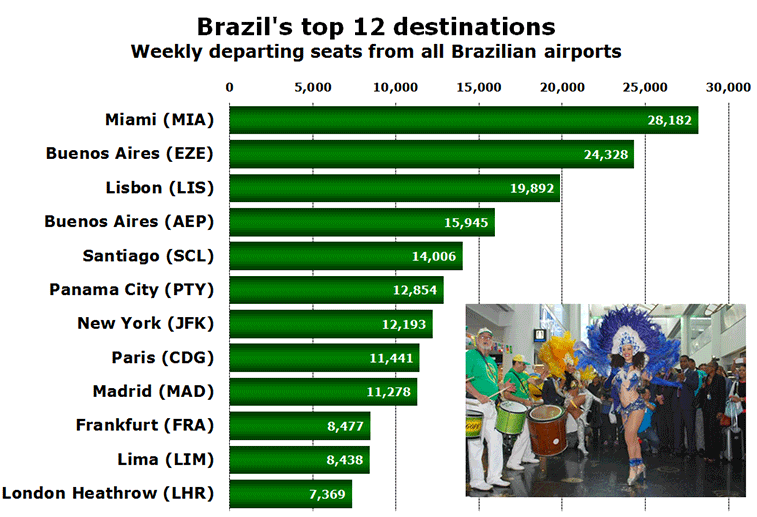