Airbus delivers more units than Boeing for the first time in 2014; Asiana Airlines receives first A380 On 26 May, Asiana Airlines took delivery of its first A380, becoming the 11th operator of the type in the world. In fact, the South Korean carrier has ordered six A380s, powered by Rolls-Royce Trent 900 engines. During the special ceremony held in Toulousse, a scale model of the aircraft’s Trent 900 engine was presented by Eric Schulz, President, Rolls-Royce to Park Sam Koo, Chairman, Kumho Asiana Group. Joining them on the stage was Fabrice Brégier, CEO, Airbus.

While Boeing continues to lead the 2014 delivery race by 23 units (down from 24 in April), Airbus managed to deliver more units than its American counterpart for the first time this year. Having delivered more than 100 aircraft each month since March, the two manufacturers have once again recorded an impressive score, making it the best May since anna.aero started tracking aircraft deliveries in 2008.

The combined deliveries of both producers for the fifth month of the year, was 109, of which 55 came from Airbus, and 54 from the American producer. Airbus improved its performance when compared to the same month last year, delivering three more units, while, Boeing handed over two fewer airframes. Nonetheless, 77% of all April deliveries were narrow-bodies, which is up 4% from April’s figures. 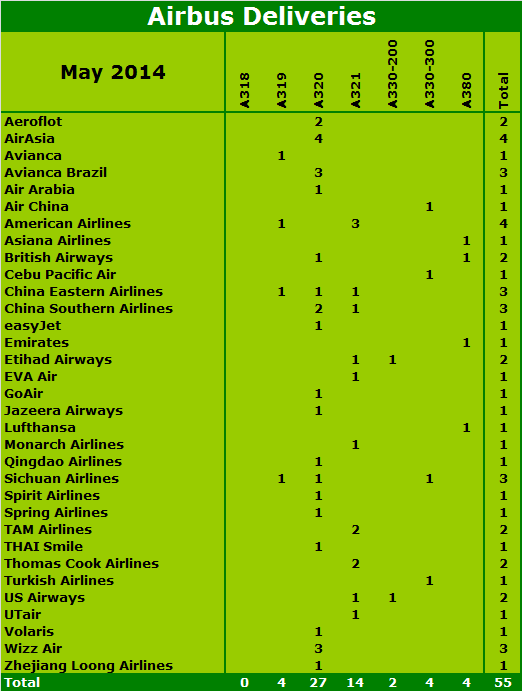 Airbus ended May with a total of 55 units delivered, which constitutes three airframes more than the amount delivered in April 2014 and 10 more than in the corresponding month last year. Over the five completed months of 2014, the European manufacturer handed over 248 units, representing a modest increase of 0.4% (one unit more) on the same period last year.

Once again, single-aisle deliveries in May were led by the A320 (27 units) with 45 single-aisle aircraft provided to carriers around the world. The Malaysian low-cost carrier, AirAsia, was one of five operators to receive more than two narrow-body units from Airbus, as it incorporated four A320s into its fleet. Besides this, other noteworthy carriers to receive three units were Avianca Brazil (three A320s), American Airlines (three A321s), China Southern Airlines (two A320s and one A321) as well as the Hungarian LCC — Wizz Air (three A320s).

Furthermore, a total of 10 wide-bodies were delivered in May, accounting for two fewer units than in the preceding month, but one more than in the corresponding month of 2013. While in the fourth month of the year Airbus had not delivered any A380, the European manufacturer restarted the deliveries in May, handing over four units of the type, one each to Asiana Airlines, British Airways, Emirates and Lufthansa. On 19 May, Aeroflot took delivery of a new A320 fitted with sharklets, which was named in honour of Pavel Popovich, a famous Soviet cosmonaut, who was the eighth man in space. 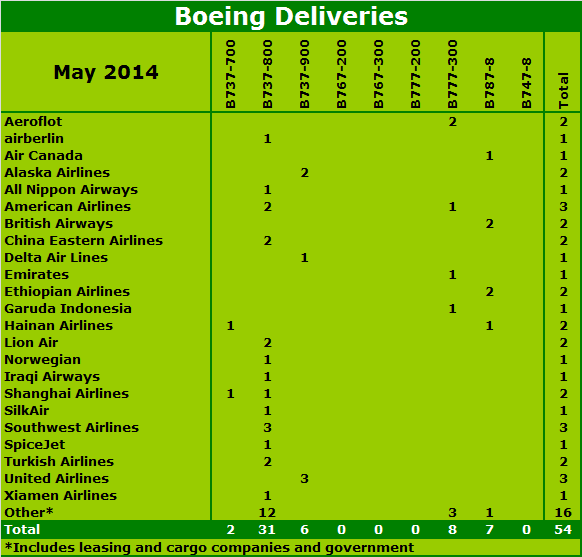 Carriers received a total of 39 narrow-bodies from the American producer, the same amount delivered in the preceding month. In May, Southwest Airlines was the largest recipient of the 737 family for the second consecutive month, as it took delivery of three 737-800s. Nevertheless, the world’s largest low-cost carrier is sharing this month’s top position with United Airlines, which incorporated three 737-900s into its fleet. In addition, five other carriers received more than one single-aisle unit from Boeing, namely Alaska Airlines (two 737-900s), American (two 737-800s), Lion Air (two 737-800s) as well as Turkish Airlines (two 737-800s).

A total of 15 wide-body airframes were delivered by Boeing in May 2014, two fewer than in April. Moreover, the American manufacturer worsened its year-on-year performance, handing over nine fewer wide-body units than the 24 it managed in the corresponding month last year. Following eight and nine 787-8s delivered to carriers in April and March respectively, Boeing continued to clear the backlog with a total of seven units of the type reaching customers in May. Both BA and Ethiopian Airlines incorporated two 787-8s into their fleets, while three other operators took delivery of one unit each. On 18 May, Toronto Pearson Airport greeted with the traditional water arch salute Air Canada’s first 787-8 of the 37 aircraft ordered to be delivered by the American manufacturer through 2019. Commenting on the delivery, Calin Rovinescu, CEO, Air Canada, said: “The 787 Dreamliner will immediately make a dramatic improvement to our fleet capabilities. The improvement in fuel use is extremely exciting for us. The range and economics unlock new destinations for customers, who will love the innovative look and comfort onboard.”