Leipzig and Linz are two airports benefiting from Etihad Regional’s expansion from Zurich Airport. Both started getting daily turboprop service from 30 March and 1 June respectively. Etihad Regional’s network from Switzerland’s busiest airport encompasses a total of eight destinations, while the carrier serves 15 destinations from Geneva, its main base.

Swiss carrier Darwin Airline (IATA code F7) is now operating under the Etihad Regional brand. According to anna.aero’s analysis, the airline has added a total of 23 routes in the last 12 months. Some of these were launched under the Darwin Airline name, although since February 2014 all new routes have been started under the Etihad Regional brand. The airline’s two biggest operating bases are in Geneva and Zurich, while a third Swiss airport, Lugano, also makes the top 10. Six of the airline’s top 12 airports are in Italy, with Leipzig, Düsseldorf and London Stansted being the others. In total Etihad Regional is operating from 32 airports across Europe in June. 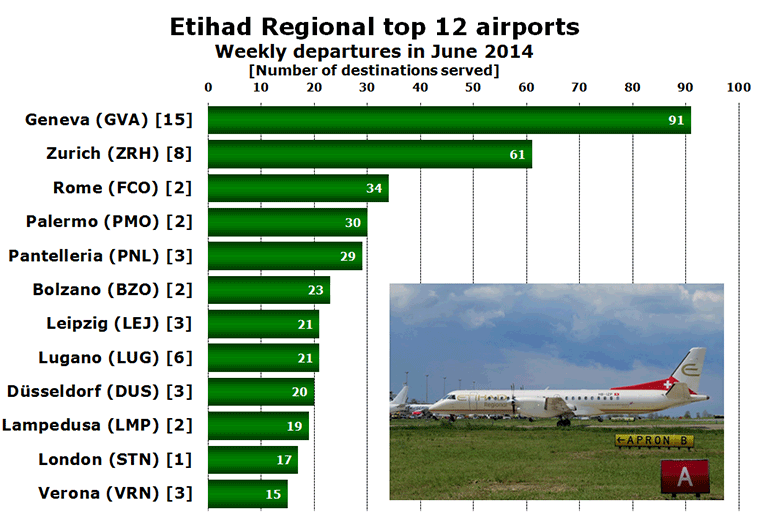 During the last 12 months the following 23 routes (which are still operating) have been launched by the airline. On only six of them does the airline face direct competition. The airline’s next new routes are planned to be daily flights from Dresden to Amsterdam and Zurich, which are expected to start in early September.

The Düsseldorf-London Stansted route was handed over to Etihad Regional from airberlin. It was airberlin’s last remaining route into the UK, and was operated with larger 78-seat Q400s. Last September, Darwin Airline began operating from Cambridge Airport in the UK to Amsterdam, Paris, Milan and Rome but all of these routes have since been suspended. Other routes announced but then not operated include Berlin-Poznan, Berlin-Wroclaw and Rome Fiumcino-Zagreb.