Athens is booming again. The Greek capital airport has welcomed new services from over a dozen airlines this year including Aegean Airlines (to Abu Dhabi), Gulf Air (to Bahrain), Singapore Airlines (to Singapore) and Ryanair (to Milan Bergamo). Across all Greek airports passenger numbers were up an astonishing 30% in an Easter-enhanced April.

Families all across northern Europe will be counting down the days to the start of the long school summer holidays, when according to ancient tradition, destinations that can guarantee some good value, child-friendly accommodation will be headed for. Greece has for many years been one of the most popular destinations, but in recent years countries such as Egypt, Morocco and Turkey have all gained a significant share of the market. Passenger numbers at Greek airports peaked in 2007 at just over 41 million, just before the recession hit many parts of Europe and in particular Greece. 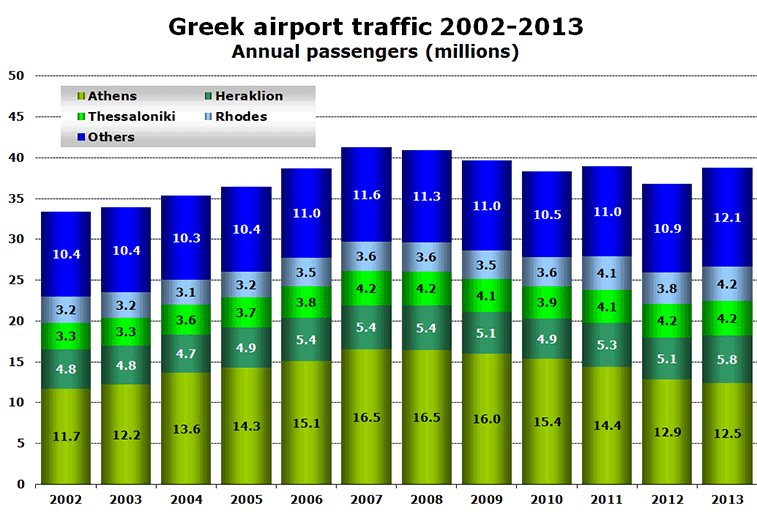 However, with Egypt’s tourism market still suffering from the political situation in the country, Greece is becoming more popular again it seems, as a ‘safe’ destination. Helped admittedly by the re-timing of Easter into April this year, Greece’s airports reported a 30.4% growth in passenger numbers in April. Although unlikely to be repeated for the rest of the summer, analysis of schedule data for August 2014 and August 2013, shows that international seat capacity is up almost 23% across all Greek airports this summer, with a net gain of well over 130 new routes.

Analysing the August schedule data by airline reveals that all of the top 15 airlines operating international flights to Greek airports this summer have increased their seat capacity compared with the previous year. The two biggest airlines for international flights, Aegean Airlines and Ryanair, are also among the fastest-growing; Aegean adding almost 39% more seats, and Ryanair 43% more. However, the fastest-growing by a big margin is Vueling, which has almost trebled its seat capacity in the Greek market. From its new Rome Fiumicino base alone Vueling will have added eight new services to Greek airports by the beginning of August. 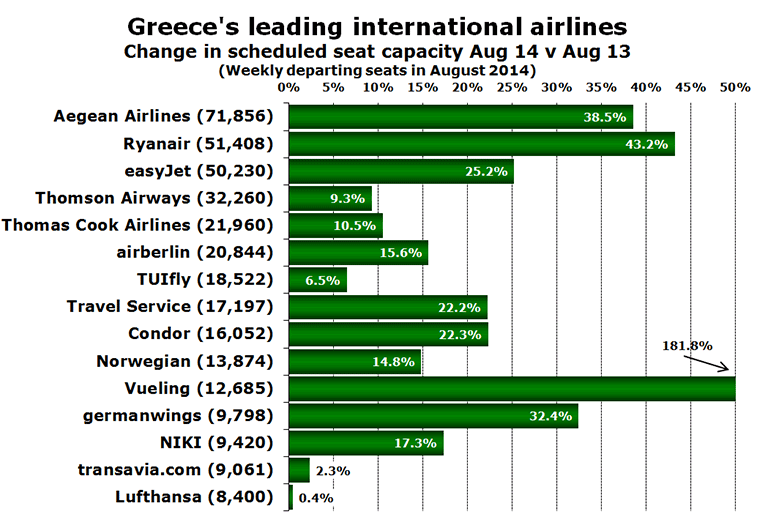 Impressively, traffic growth appears to be spread across all Greek airports. The top 15 airports for international traffic are all reporting capacity growth of more than 10% this summer, with Athens Airport, the country’s busiest, seeing a 25% increase in international seat capacity. It has been helped by new services from a wide range of airlines including Aegean Airlines, Alitalia, Brussels Airlines, easyJet, Gulf Air, Meridiana, Ryanair, SAS, Singapore Airlines, transavia.com, transavia.com France and Vueling. 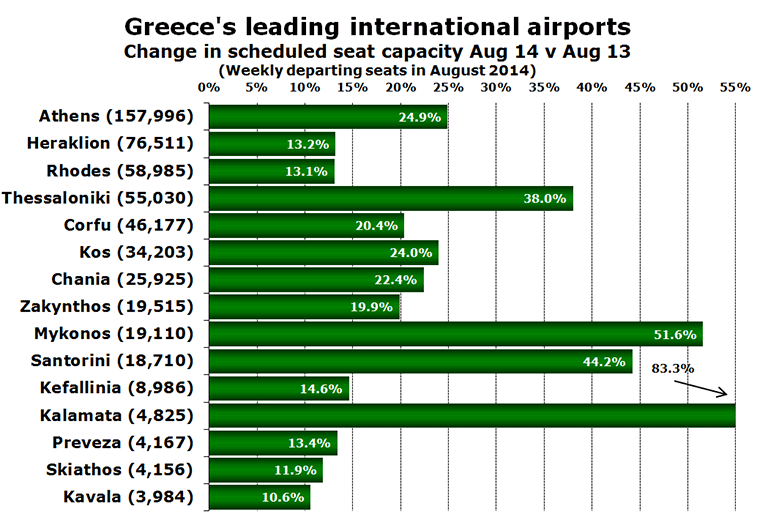 The fastest-growing Greek airport this summer is Kalamata. Whether its appearance in the opening scene of the 2013 movie Before Midnight has been a significant factor is not known, but this summer the airport welcomes eight new services; four from Condor (Düsseldorf, Frankfurt, Munich and Stuttgart), three from Aegean Airlines (Düsseldorf, Paris CDG and St Petersburg), and one from easyJet (to Hamburg). Last year, Kalamata’s passenger numbers grew by 36% to 137,000.