Juneyao Airlines’ traffic grows by 33% in 2013; LCC subsidiary expected to be launched in August 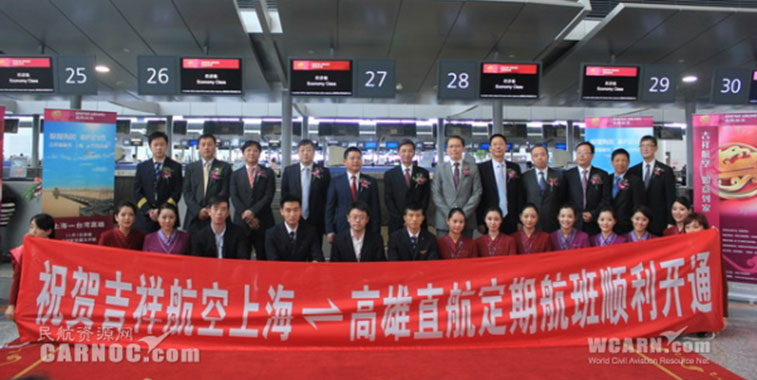 On 1 November 2013, Juneyao Airlines commenced its first cross-strait service, with the addition of thrice-weekly flights from its Shanghai Pudong base to Kaohsiung. This route has enhanced the economic, trade and cultural exchanges between the two sides.

Launched on 25 September 2006, Juneyao Airlines is a Chinese regional carrier based at both Shanghai airports — Hongqiao and Pudong. The operator has been growing impressively over the last few years as August capacity results in over 240% growth when compared to the corresponding month four years ago. According to its official website, Juneyao is currently operating a fleet of 35 157-seat A320s to over 50 destinations in seven countries. With nearly 187,000 weekly domestic seats (according to Innovata schedule data for week commencing 19 August 2014), the airline has managed to establish itself as the 13th largest operator in China, above country’s largest LCC — Spring Airlines, which is also based at both Shanghai gateways.

Examination of Juneyao’s traffic data indicates that the carrier handled 7.1 million passengers last year, representing an increase of almost 33% when compared to 2012 figures. Even though its load factor decreased by a modest 0.9%, 2013 was an excellent year for the airline as the ASKs grew by 42%, while cargo went up 13%. Furthermore, with a new addition to its network — the thrice-weekly operations from Pudong to Krabi on 21 June — Juneyao is likely to continue its growth in 2014. Besides this, the airline commenced daily flights on the 1,310-kilometre route from Pudong to Osaka Kansai on 15 April. 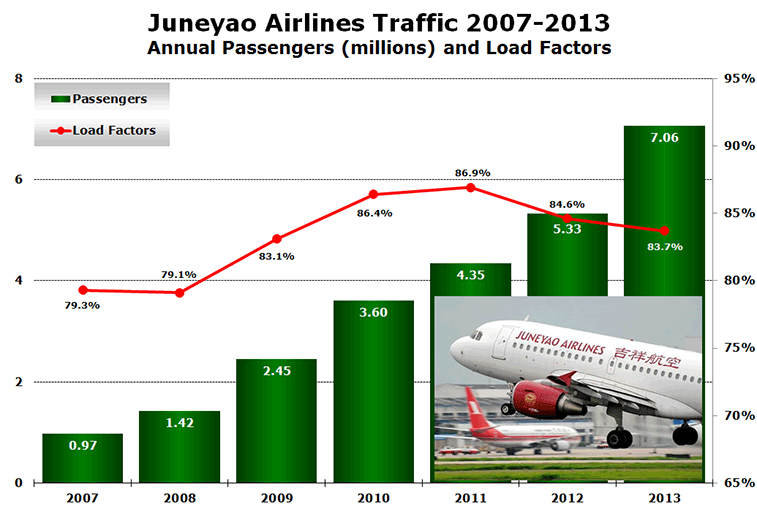 Overall, looking at passenger development between 2007 and 2013, Juneyao’s traffic soared each year, posting 600% growth over this timeframe, while its load factors fluctuated between 79% and 87%. Surprisingly, it continued to grow in 2011 as well, when it was sanctioned by the CAAC and ordered to cut back its operations by 10%. This came as a result of an incident involving the pilots of Flight 1112 refusing to allow Qatar Airways’ Flight 888 priority on landing, which declared a low-fuel emergency on 13 August 2011.

According to Innovata schedule data for this August, Juneyao operates 81 routes, with the top 16 airport pairs accounting for 20% of all weekly seats (representing a 1% decrease from last year’s figures as a result of the airline diversifying its network). Following a modest yearly increase of 0.2%, the Hongqiao-Sanya route still accounts for the majority of weekly seats in 2014. However, due to Juneyao posting a net annual increase of 695 weekly seats from Hongqiao to Changsha, the 1,881-kilometre sector to Sanya shares this year’s top position with the thrice-daily flights to the capital of Hunan province. Furthermore, both the carrier’s bases dominate the largest routes by weekly seats, with the Hangzhou-Guiyang airport pair (highlighted in the graph below) being the only service not to feature either Hongqiao or Pudong. 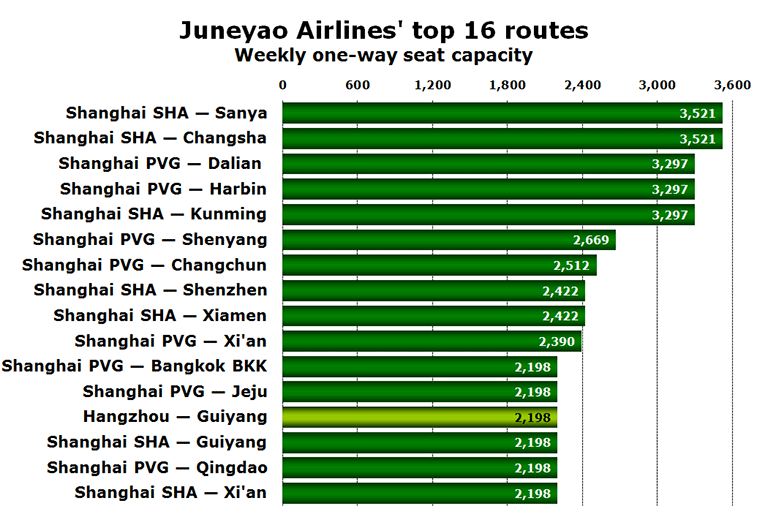 This August, the carrier’s weekly seat capacity experienced 16% growth when compared to data from the same week last year, with 10 of the top 16 airport pairs growing, while another three saw their operations unchanged. Therefore, the link between Pudong and Xi’an is not only a new entrant into this year’s graph, but also the fastest growing airport pair, having increased by almost 120% or 1,291 weekly seats in the past 12 months. On the other hand, the 1,209-kilometre sector from Hongqiao to Shenzhen provided the greatest capacity decrease (-45%).

Low-cost subsidiary expected to be launched in August

Starting from August, Juneyao will launch a low-cost subsidiary, Jiuyuan Airlines, which will become the third Chinese low-fare operator after Spring Airlines and West Airlines. The carrier decided to base its operations at Guangzhou to explore the labour market potential of the Pear River region. In addition, Jiuyuan will commence its first services utilising three leased 737s, but is likely to expand its fleet as a result of committing to an order of 50 737s last month.