Cairns on course to crack 4.5m passengers for first time

Last December, Cathay Pacific Airways celebrated 20 years of service into Cairns Airport. In the last 12 months the Hong Kong-based carrier has doubled its weekly seats into the airport which acts as the gateway to the Great Barrier Reef.

Currently Australia’s seventh largest airport, which according to its own website is ‘connecting the world to the Great Barrier Reef’, Cairns Airport clearly bats above average, as the city of Cairns is only the 14th largest (according to the Australian Bureau of Statistics) in the country. The tropical climate and its proximity to one of the seven natural wonders of the world clearly act as a passenger traffic magnet for the airport.

As recently as 2006, Cairns was the sixth largest airport in Australia, but it was overtaken by Gold Coast Airport (which is situated less than 1,500 kilometres down the Queensland coast) in 2007 – positions that both airports still maintain today. Referring to Cairns’ May traffic statistics, which also covers the 11th month of its current financial year, the airport looks set for marginal growth in FY2014, with 3% growth recorded in the year-to-date. On this basis, anna.aero is relatively confident that it will break the 4.5 million passenger barrier for the first time in its history. 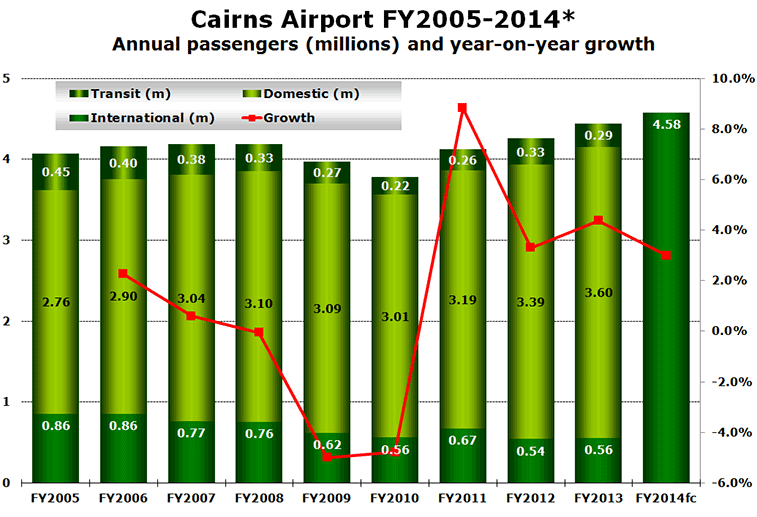 The big structural change in the airport’s traffic mix is the increasing proportion of domestic passengers as a share of the total figure. In FY2005 domestic traffic represented 67.8% of passengers, however so far in FY2014 this sector commanded 85.6% of annual throughput. Indeed, during the last 12 months the airport has lost its twice-weekly China Eastern Airlines service to Shanghai, which has exacerbated this trend.

Commenting on this route loss, airport CEO, Kevin Brown says: “There has been strong growth in the number of Chinese people visiting Cairns even without year round direct flights from mainland China. Cairns Airport is working with key Chinese airlines, tourism partners and the travel trade to extend the seasonal services that operate during the popular Chinese New Year period to full-year services.” Approval and construction of the proposed Aquis resort development in Cairns is expected to provide a catalyst for several new direct services into the airport from mainland China.

However in terms of the airport’s capacity to another of its major overseas markets — Japan — Cairns will welcome Jetstar 787s on its Tokyo and Osaka Cairns routes in the coming months. “Jetstar is increasing the number of rotations on the Cairns-Osaka service from four per week to five for the off-peak season,” says Brown. “The new aircraft and extra rotation will provide an additional 52,000 seats on these two routes.”

Cairns rated as ‘excellent’ by SVID

Entering Cairns’ monthly passenger data for 2013 into anna.aero’s Seasonal Variation in Demand (SVID) calculator, the airport performs very well, generating a score of 1.57 — an ‘excellent’ rating. With over 30 seasonality performance evaluations completed so far in 2014, the airport can be proud of its global ranking of 12th, in between Timisoara (1.56) and Zurich (2.12). Evaluating Cairns alongside its Australian peers, we also ran calculations on Canberra (CBR), the nation’s eighth largest airport (0.74) and Gold Coast (OOL), #6 (1.10). All of the airports are each worthy of an ‘excellent’ SVID result, but no doubt benefitting from the flatter, year-round demand of government traffic, the #1 spot of the three belongs to the capital Canberra. 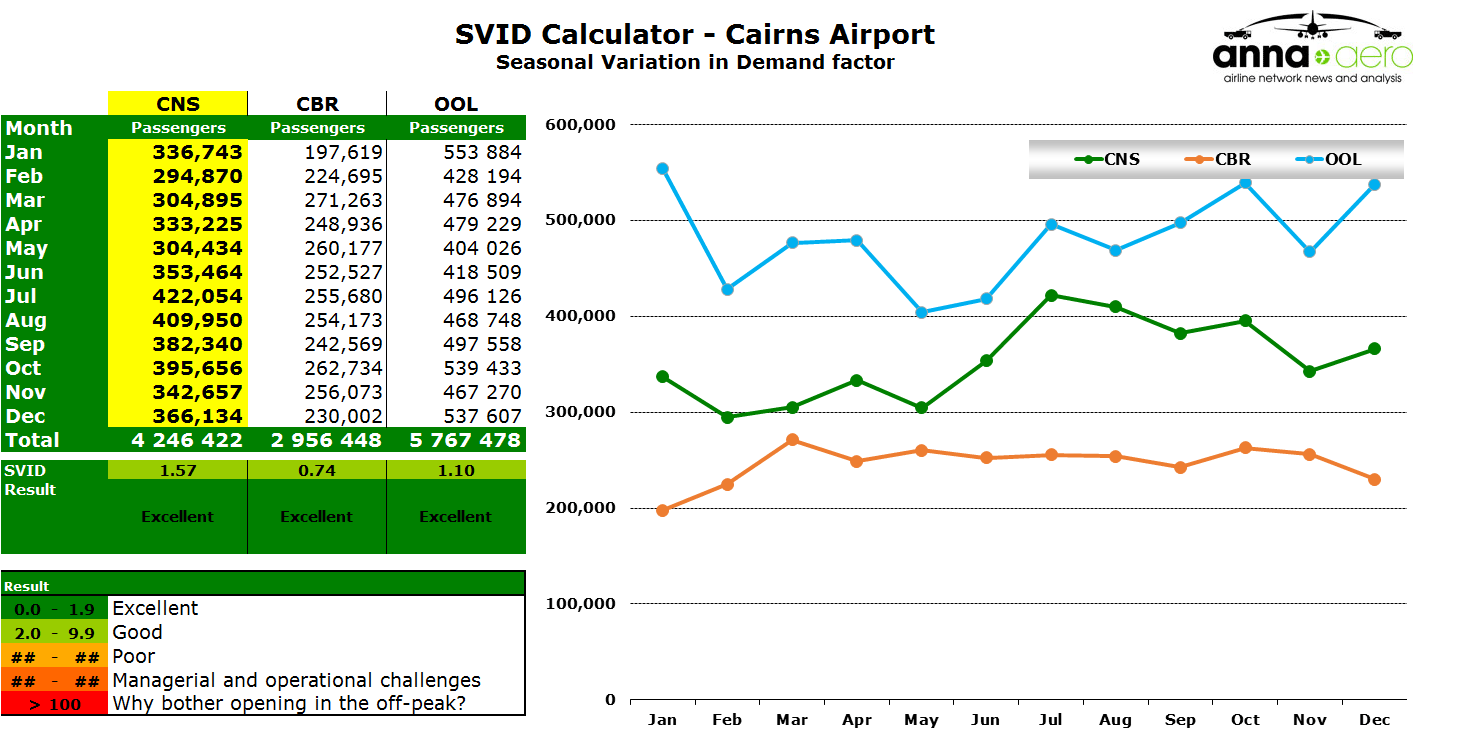 With domestic traffic becomingly increasingly important at the airport, it’s no surprise that the country’s big four domestic carriers dominate (Jetstar Airways, Qantas, Virgin Australia Airlines and Tigerair Australia) at Cairns, commanding 92.3% of total weekly seats — although this has fallen marginally in the last 12 months from 92.7%. Capacity cuts by #2 carrier Qantas, -209 weekly seats year-on-year, and by Virgin Australia, -1,096 seats year-on-year, have been more than off-set by increases at Jetstar and Tigerair Australia, which have both increased their respective share of seats. 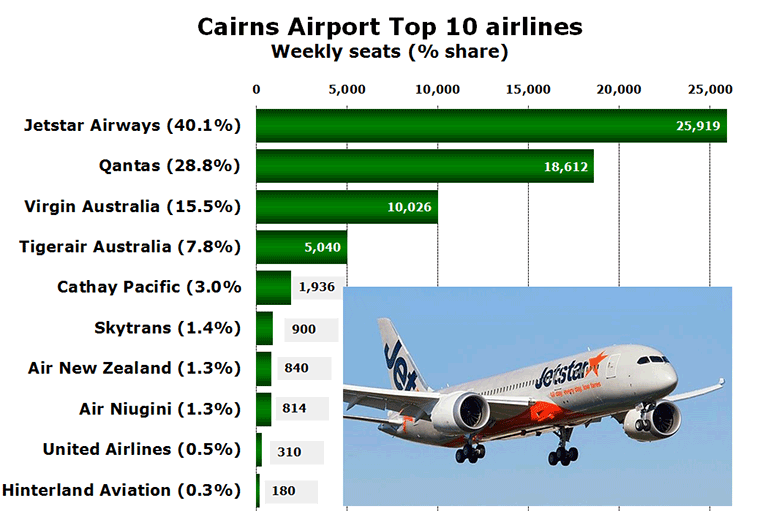 Cathay Pacific Airways’ doubling of its weekly capacity to Hong Kong has seen it jump from sixth largest carrier to fifth in the past year, whereas Air Niugini has fallen from fifth to eighth in the same period. While United Airlines has also increased its weekly seat commitment to Cairns, its Star Alliance partner Air New Zealand has remained consistent during the last 12 months, offering exactly the same amount of seats on its five times weekly operation to Auckland.

Six out of top 10 routes at Cairns are other destinations in Queensland, led by Brisbane in the #1 spot. On this most important route, the big four domestic carrier’s take the lion’s share of operations, with Virgin Australia (31 weekly flights) just ahead of Jetstar (30) and Qantas (28), with Tigerair Australia (seven) and Cathay Pacific (four) trailing some way behind. 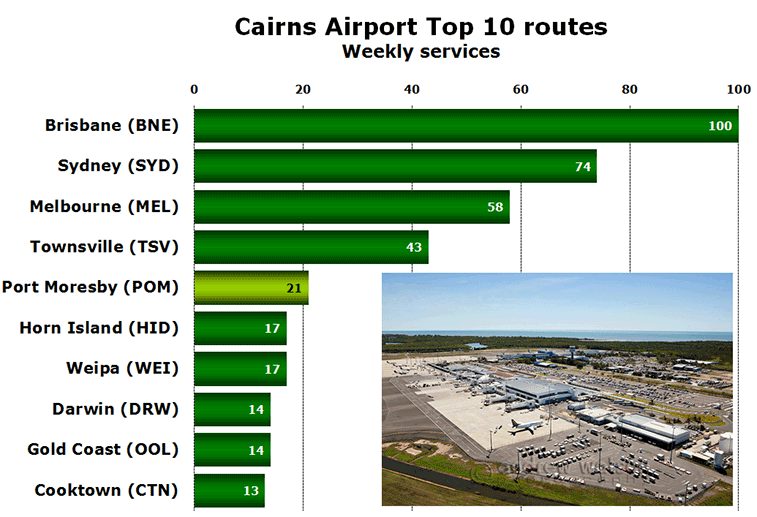 Only one international service breaks into the top 10, Port Moresby in Papua New Guinea, which is served with a combined 21 weekly flights, split between Qantas (12 times weekly) and Air Nuigini (nine times weekly). Surprisingly, Cairns is not linked to the Australian capital of Canberra, which must be the number one domestic route opportunity at the airport, as (according to Innovata / Diio Mi schedule data) the cities have not been linked with non-stop service for at least the last ten years, if ever. In terms of international route development Brown comments: “We are continuing to work with airlines to secure new routes direct to Cairns from key Asian cities including mainland China, other Japanese cities, Korea, Taiwan and the key location of Singapore.”