Etihad Airways, Aer Lingus and Norwegian have all started new routes to airports in California this year. Etihad Airways started serving Los Angeles from Abu Dhabi on 1 June, Aer Lingus resumed service to San Francisco from Dublin in April (after a five year hiatus), while Norwegian connected Oakland with both Oslo and Stockholm in May. 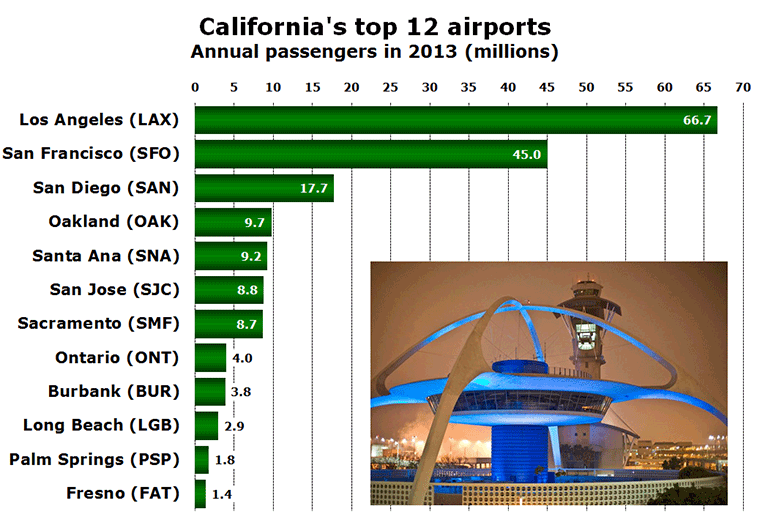 Analysis of schedule data for July 2014 confirms that Southwest Airlines is the leading airline operating at airports in California, ahead of United Airlines. Alaska Airlines is an impressive fifth ahead of US Airways, with California-based Virgin America in seventh place ahead of JetBlue Airways. Air Canada is the leading foreign carrier (highlighted in bright green) in ninth place, while two Mexican carriers just make the top 15 as well. Three LCCs (Spirit Airlines, Allegiant Air and Frontier Airlines) all make the top 15 but have a combined seat market share of just 2.3%. 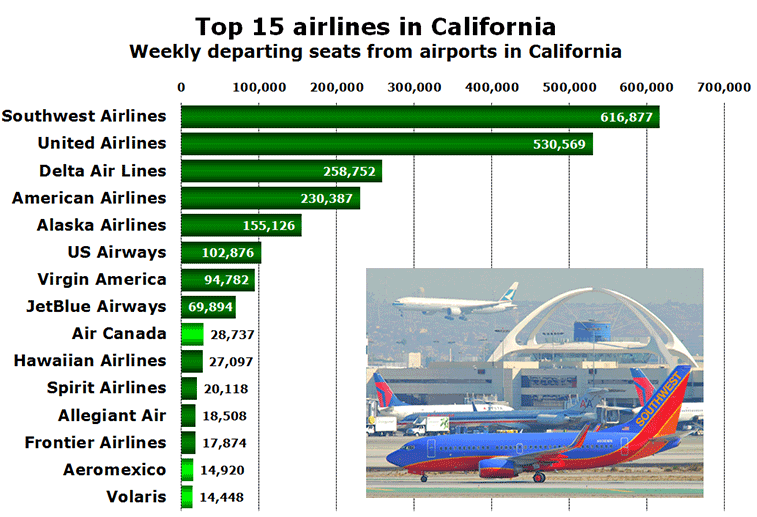 In total 62 airlines currently operate scheduled services to airports in California, an increase of one compared with last July. New airlines serving the golden state are Aer Lingus, Avianca, Etihad Airways, Norwegian and Saudi Arabian Airlines, while services from Arkefly, LACSA, Malaysia Airlines and TACA have been terminated.

Since last July, Phoenix has overtaken Las Vegas to be the leading airport served from airports in California. With seat growth of over 13% compared with a year ago, it is even possible that Seattle-Tacoma may pass both Phoenix and Las Vegas to become the leading route, as Delta Air Lines continues to ramp up its operations there to feed its Asian network. Among the top 15 destinations from California are four ‘domestic’ airports within California (highlighted in bright green). Three of these have seen a reduction in capacity since last July. 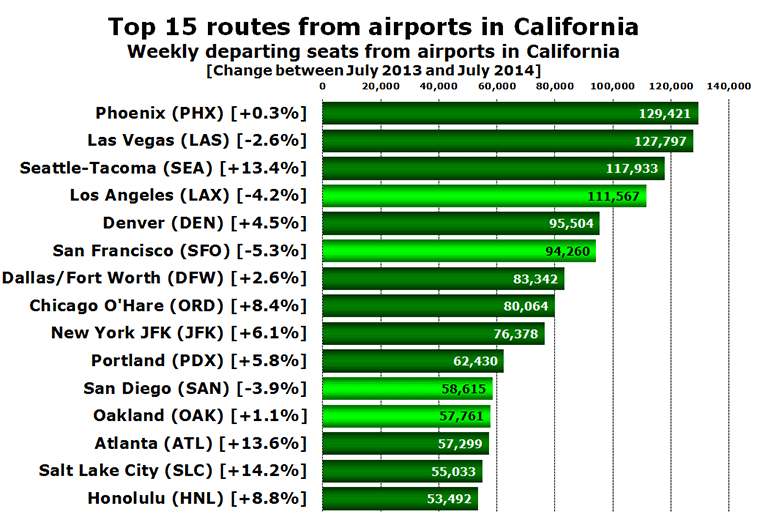 Mention should be made of the intra-Californian route between Los Angeles and San Jose. In early 2013 four carriers operated this route (Alaska Airlines, American Airlines, Southwest Airlines and United Airlines). Virgin America then started serving the route on 1 May followed by Delta Air Lines on 10 June. This made it the most competitive airport pair in the US. However, since then both Alaska Airlines (5 April 2014) and Virgin America (14 May 2014) have suspended operations on the route, leaving four carriers once again to fight for passengers in this market.