Interjet and Volaris battle to be #1 LCC in Mexico; TAR Aerolineas launches operations from Queretaro TAR Aerolineas, a new Mexican regional airline, began operations in March 2014. Its first route from Toluca (to Acapulco) was celebrated on 30 May by the traditional ribbon-cutting ceremony, speeches and a fire truck water arch salute. The new carrier currently operates three ERJ 145s on a range of domestic routes, and claimed a 0.24% share of the Mexican domestic market in April, according to government statistics.

The battle to be the leading carrier in the Mexican domestic market continues to be a closely-fought contest between two LCCs, Interjet and Volaris. For all of 2011, 2012 and the first half of 2013 Interjet led the way with a market share of between 23% and 27%, but in July 2013 it was passed by Volaris. Since then the two have traded places quite regularly with Interjet coming out on top in April 2014, the most recent month for which passenger statistics are available.

The Aeromexico group of airlines have a combined share of around 35%, but this is currently split between Aeromexico Connect (20.2% in April 2014) and Aeromexico (15.1%). The LCC share of the domestic market (Interjet, VivaAerobus and Volaris) is consistently around the 60% mark. However, the newest domestic airline, TAR Aerolineas, which began operations in March, is not an LCC, operating as it does, ERJ 145s. 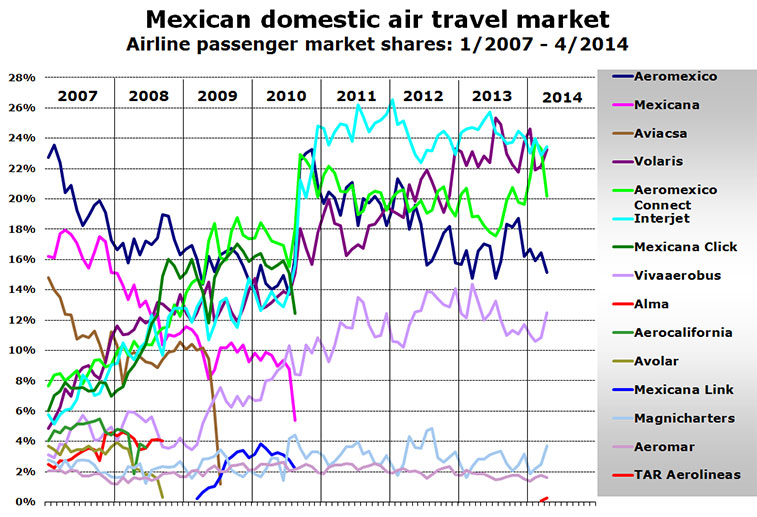 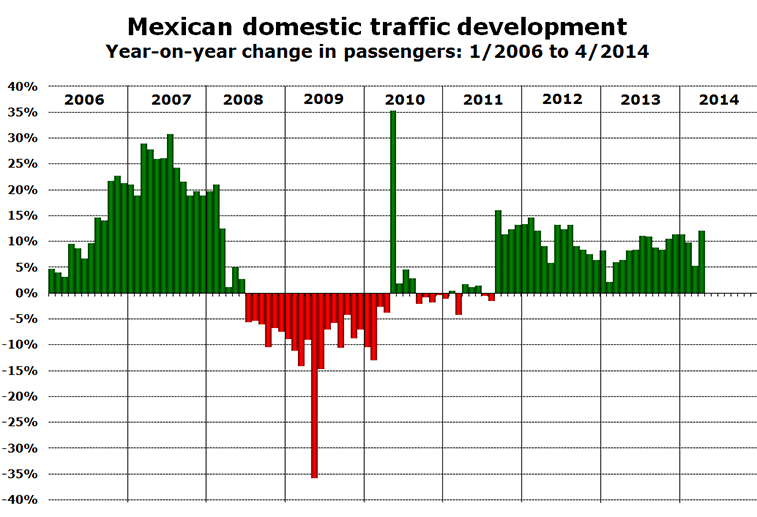 International traffic also grew solidly last year, with passenger numbers up 9% to 29.5 million. Growth in the first four months of 2014 has been just under 11%. 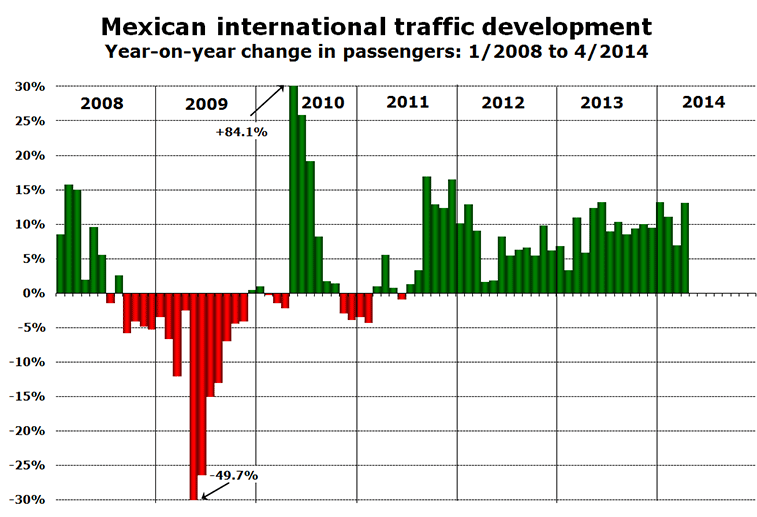 Of the 11.5 million international passengers carried to/from Mexico in the first four months of this year, just 21% were transported on Mexican airlines, with Aeromexico’s share being 14.1%, followed by Volaris (4.4%) and Interjet (2.3%). US airlines accounted for 53% of the market with United Airlines (14.5%) leading the way, followed by American Airlines (11.3% – including American Eagle) and Delta Air Lines (8.0%). The leading European carrier is Iberia, with just under 1% of the market.