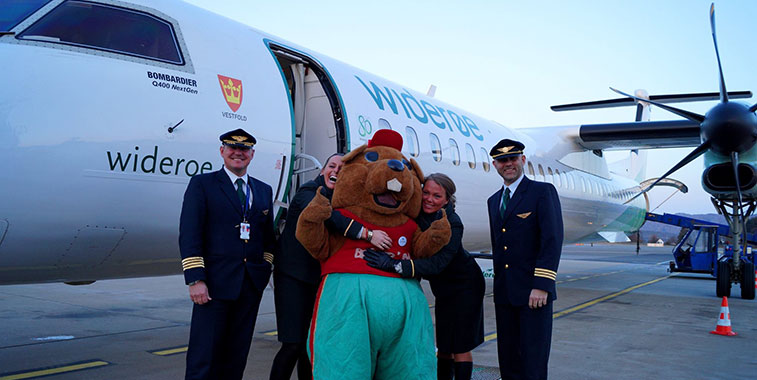 Leave the beaver alone! We love a good mascot at anna.aero and this one is from a summer park in the south of Norway who recently flew on Widerøe, handing out free tickets to passengers. The airline currently operates over half of all the flights in the Norwegian domestic market, though both Norwegian and SAS offer more seats.

Norwegian regional carrier Widerøe operates a fleet of over 40 Bombardier turboprop aircraft, almost exclusively on domestic routes. In February of this year, it ranked 15th among all airlines operating in Europe for the number of weekly flights. On Tuesdays it ranked as high as tenth, with 438 departures, more than any of airberlin, Alitalia, Flybe, Iberia or even Norwegian. In the last 10 years passenger numbers have grown by almost 60% to just under 2.9 million in 2013. Impressively at no point during this difficult period in Europe did the airline report a drop in passenger numbers. The airline has told anna.aero that it expects to carry some 3.1 million passengers in 2014. 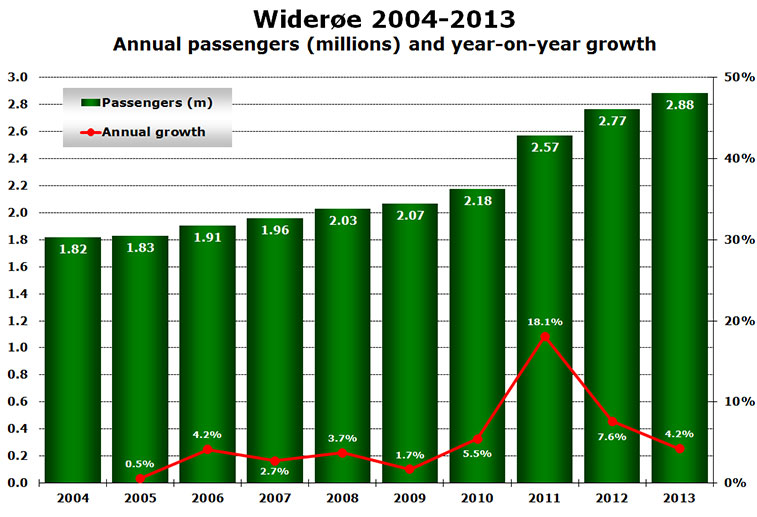 Average annual load factors during this period have been in the 54% to 60% range, as tends to be typical for regional airlines focussing on the business market.

48 airports served of which 44 are in Norway

The airline currently serves 48 destinations of which 44 are in Norway, with Alesund the most recent domestic airport to be added, when daily flights from Bergen began operating in March. The airline’s only international services are to Aberdeen (from Bergen and Stavanger), Copenhagen (from Haugesund, Kristiansand, Molde and Oslo Torp), Gothenburg (from Oslo) and Newcastle (from Stavanger). With many rural communities in Norway relying on air links to major cities in Norway, some 40% of Widerøe’s services are operated as PSO (Public Service Obligation) routes. According to schedule data for July, Widerøe will operate 54% of all flights between Norwegian airports (versus 25% for SAS and 18% for Norwegian), but these flights will only represent 27% of seat capacity (versus 37% for SAS and 35% for Norwegian). 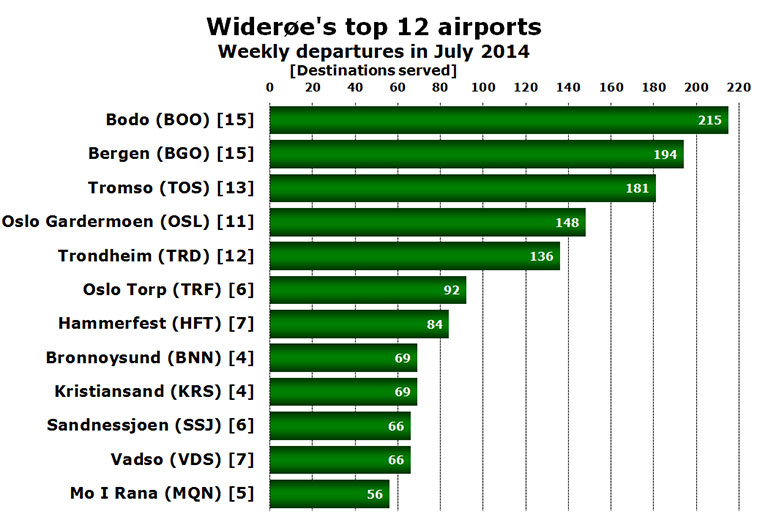 With such a strong focus on short domestic routes it is no surprise that the airline’s average sector length of just 287 kilometres is among the shortest in Europe for a significant airline. On 28 June the airline began a new thrice-weekly service between Oslo Torp and Harstad/Narvik, which at 1,083 kilometres will be the airline’s second longest sector after its daily flights between Bergen and Tromso.